Tilray's (NASDAQ:TLRY) stock has been in a free-fall this year, seeing its valuation cut in half. Although investors haven't been very positive on pot stocks this year in general, Tilray has certainly been one of the more notable underperformers of 2019. While the sell-off is probably concerning for investors, it may not be time to give up on the stock quite yet.

Below are three reasons Tilray could be a good bet to bounce back -- and why it could rally very soon.

1. The company's growth has been massive, and there could be even more to come

In Tilray's most recent quarterly results, sales of $45.9 million were up 371% year over year. What's perhaps most encouraging about the results is the diversification in the company's revenue. While the adult-use market in Canada definitely gave the company a big boost, adding more than $15 million in sales this quarter, it was the food products segment that contributed the most at just under $20 million in sales. Internationally, the company also saw revenues triple to $1.85 million.

What's exciting about this is that Tilray has so many different avenues in which to grow its sales. The company's purchase earlier this year of Manitoba Harvest, maker of the popular Hemp Hearts products, positions Tilray for success in the U.S. hemp market, which could be worth an estimated $13 billion by 2026. Meanwhile, the adult-use market continues to grow in Canada, and Tilray is making moves to expand in that area as well, with the most recent being the acquisition of cannabis retailer Four20. 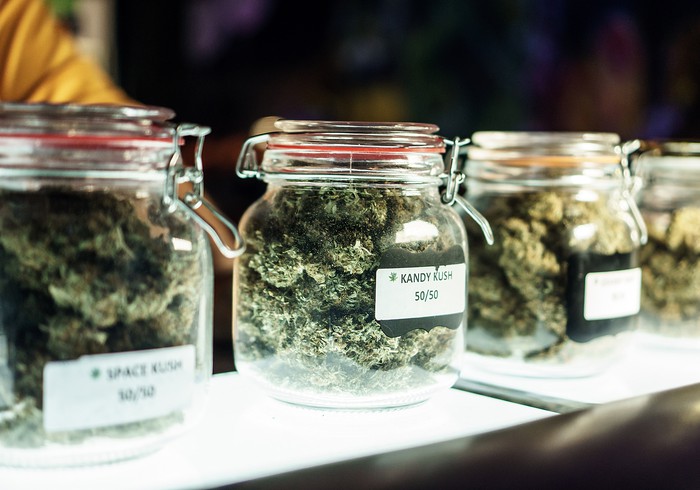 2. Analysts are still bullish on the stock

Recently, an analyst at Cowen reduced her 12-month price target for Tilray from $150 down to just $60. While that may be concerning, the reality is that $150 was likely well above what the best-case scenario for the stock was going to be. The fact that she still sees it rising to $60 should be encouraging to investors, reaffirming that there's still lots of potential upside for the stock -- perhaps enough for it to double.

3. The partnership with Anheuser-Busch could be huge for the company

Last year Tilray joined forces with Anheuser-Busch InBev, the name behind popular beer brands Budweiser and Stella Artois, in a joint venture that would research cannabis-infused beverages. While there hasn't been anything unveiled just yet from the joint venture, when there is news, it could draw a lot of attention and generate some excitement for these two stocks. Not only could Tilray benefit from the sales that come from a cannabis-infused beverage, but it could bring back some hype to the company and the industry.

Tilray's stock is down, but that may make it a more attractive buy today, given that its share price is now much more reasonable. With the stock still having lots of potential growth left, there's no reason that it can't recover from this. While the lack of profitability for Tilray may be a concern for investors, it shouldn't be enough to negate the opportunities that the company has over the long term.