For investors seeking growth stocks, one of the common places to turn is China, a market that holds the promise of continued growth for many years to come. Other investors with the same mindset recognize the electric-vehicle (EV) market as a significant opportunity. According to the Bloomberg New Energy Finance (NEF) report, for example, global EV sales are forecast to rise from 2 million in 2018 to 56 million by 2040. 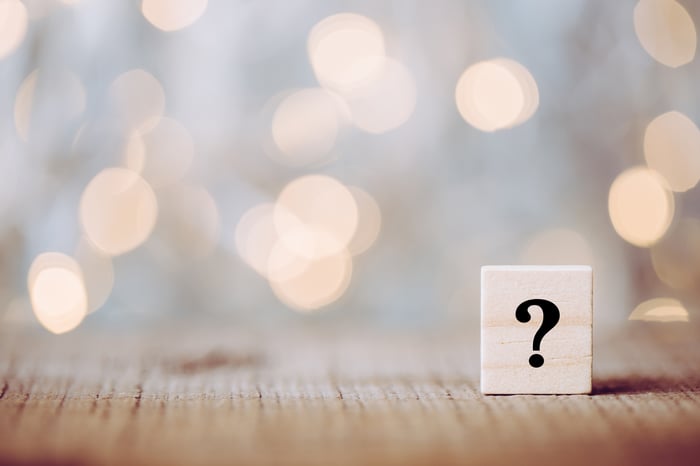 Getting to know the contenders

Besides the facts that NIO and Niu Technologies are both located in China and are both committed to EVs, these businesses share another similarity: relatively short lives as publicly traded companies. NIO completed its initial public offering in September 2018, and Niu Technologies hit the public market one month later in October. The amount of information regarding their historical financial performances, consequently, is rather sparse. However, there's enough data that we can get acquainted with the businesses by using some common metrics.

NIO has a limited history of generating revenue since it only began delivering its first model, the ES8, in June 2018, but it's worth noting that the company expanded its lineup this summer, beginning deliveries of the ES6 in June.

Launching its first product, the N-Series scooter, in June 2015, Niu Technologies has a longer history of reporting sales. In fact, over the past three years, the company has grown the top line at a compound annual growth rate of more than 104%.

Where are the market opportunities knocking?

Currently, NIO intends to sell its EVs solely in the Chinese market for the foreseeable future. So while the global EV market is poised for rapid growth, it's uncertain whether NIO will avail itself of this opportunity. The Chinese market, nonetheless, will be significant. Bloomberg NEF forecasts passenger EV sales in China will grow to more than 132 million in 2040 -- a considerable rise over the expected 1.5 million in passenger EV sales in the country for 2019. One of the challenges for NIO, though, is the extensive competitive landscape. As of last March, there were 486 EV manufacturers registered in China.

Whereas NIO is not setting its sights beyond the Middle Kingdom, Niu Technologies is committed to international growth. The company has a global presence that grew to 34 countries in Q2 2019 from 23 countries during the same period last year, helping it to mitigate the risk of a downturn in the Chinese market. How does this impact the company's financials? In the first half of 2018, China accounted for 87% of the company's revenue, falling to 76% of revenue for the first half of 2019. And the company has begun to make inroads in the American market, as it reported the delivery of 1,500 e-scooters to the U.S. in Q2 2019.

It's not uncommon for growth companies to rely on debt to finance their growth initiatives, and while this can be a valuable strategy, a company's decision to weigh down its balance sheet with debt can be a red flag. In terms of NIO and Niu Technologies, the difference in approaches to debt is clear. According to Morningstar, NIO has a debt-to-equity ratio of 5.03, while Niu Technologies has a much more conservative debt-to-equity ratio of 0.42.

While NIO's extensive reliance on debt is noteworthy, investors' concerns about its ability to service its debt could be allayed if the company had the ability to organically generate copious amounts of cash. But this isn't the case. 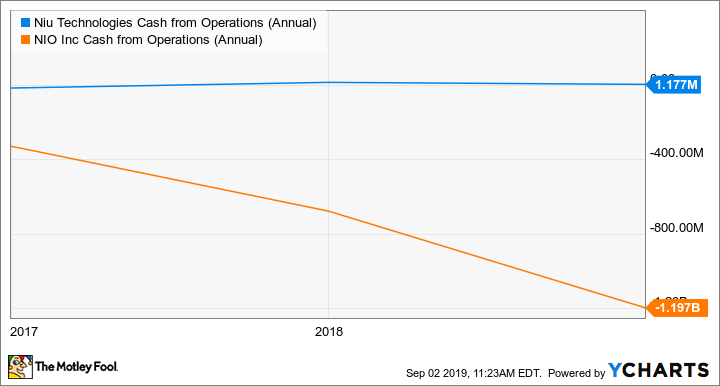 NIO, unlike Niu Technologies, has a history of reporting negative operational cash flow. And there doesn't seem to be an indication that this trend will reverse in the coming quarters, suggesting that its financial health can be characterized as precarious at best.

Undoubtedly, NIO and Niu Technologies both have challenges before them, but the formidable amount of competition facing NIO in China suggests the company has a rough road ahead in gaining market share. However, the most concerning issue for the EV manufacturer is certainly the company's debt-laden balance sheet -- one that could raise the hackles of even the most risk-tolerant investors.

Nonetheless, we should take a look at stock prices. Niu Technologies trades at 2.3 times sales, less pricey than NIO's multiple of 3.3. For some perspective, both stocks trade at a premium to the S&P 500's 2.15 multiple.

Bearing in mind these valuations, it's clear that Niu Technologies currently offers investors the better opportunity.