Mercedes-Benz is showing off its vision of an electric luxury sedan of the near future -- and something like it is probably under development.

Daimler's (OTC:DMLR.Y) luxury unit unveiled a concept car called the Vision EQS at the International Motor Show in Frankfurt this week. It's a big, all-electric luxury sedan with some self-driving capabilities -- and a lot of fanciful details that are just for show.

But if we look carefully, we can see where Mercedes is going with this -- and why it might be important to investors in Daimler and its rivals, including Tesla (NASDAQ:TSLA). 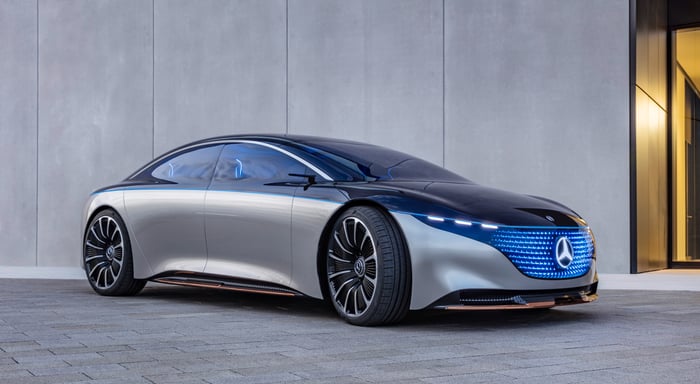 A show car that isn't just for show

In Mercedes-speak, the Vision EQS is a concept car ("Vision") with an electric drivetrain ("EQ") that points to a future big luxury sedan ("S" as in "S-Class"). With its blue-lit front end and futuristic interior, it's clearly a show car -- but it's not just a show car.

The Vision EQS is built on a brand-new electric-vehicle architecture, called EVA2, that is "scalable" -- its length, width, battery size, and other features can be changed to underpin different types and sizes of vehicles. Mercedes plans to use EVA2 as the basis for a new range of all-electric Mercedes-Benz vehicles.

The Vision EQS is a dual-motor, all-wheel-drive design. The motors provide a combined 350 kilowatts of power and 560 pound-feet of torque, enough to take the big sedan from zero to 100 kilometers per hour (62 mph) in less than 4.5 seconds, Mercedes says. 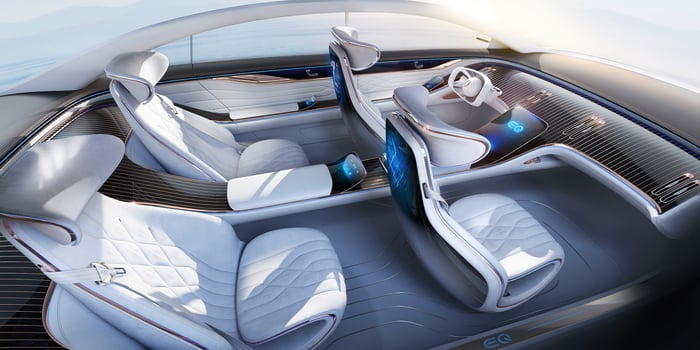 The interior of the Vision EQS is show-car fancy, but it indicates how much room might be available in a production version of the sedan. Image source: Daimler AG.

Its battery pack is a big one -- 100 kilowatt-hours (kWh) -- but it appears to be quite efficient. Mercedes claims that the Vision EQS has a "comfortable operating range of up to 700 kilometers" (about 434 miles) on the European WLTP test cycle. It's fully compatible with the most powerful DC Fast charging stations available now: A 350-kilowatt charger can recharge the Vision EQS to 80% in "significantly less than 20 minutes," the company said. That's impressive given the size of the battery.

Mercedes said that the Vision EQS has Level 3 conditional autonomy (hands-off highway driving) with modular sensors that can be upgraded to support full self-driving when that becomes available.

How much of this is for real?

Mercedes is dropping very strong hints that something like this is destined for production, and its history can give us a guide as to what to expect.

Back in 2016, Mercedes showed something called the Generation EQ, a concept vehicle that it described at the time as a preview of an upcoming electric SUV. As you can see in the photos, it was similar to the Vision EQS in that it had a futuristic-looking interior and that distinctive blue nose. 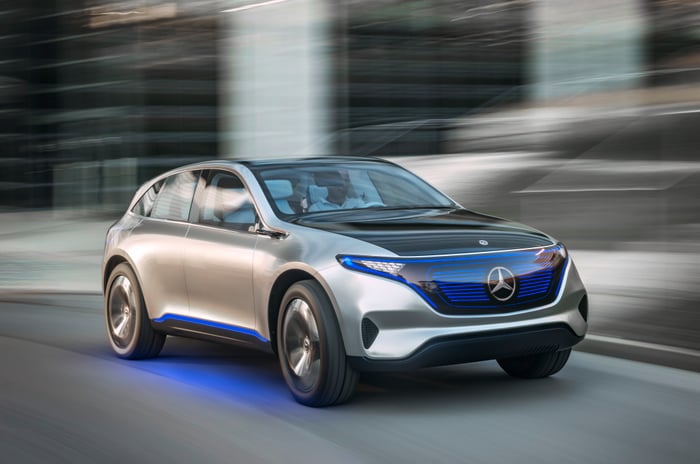 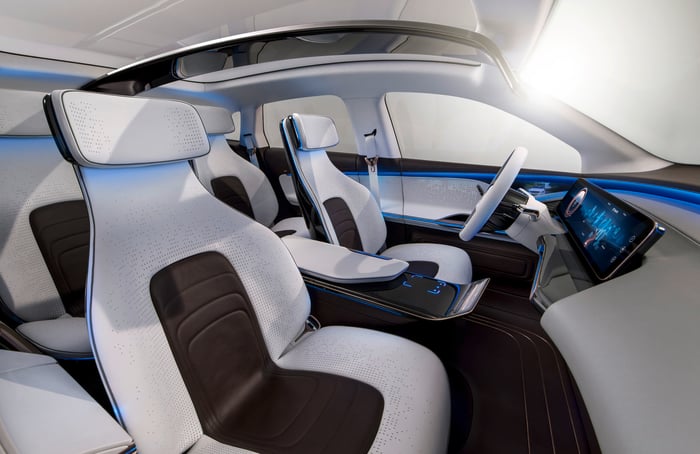 Now take a look at the production version, the Mercedes-Benz EQC. It's very similar in size and shape, and its range and performance are comparable to the concept's -- but many of the show-car details have been replaced by more conventional Mercedes-Benz components. 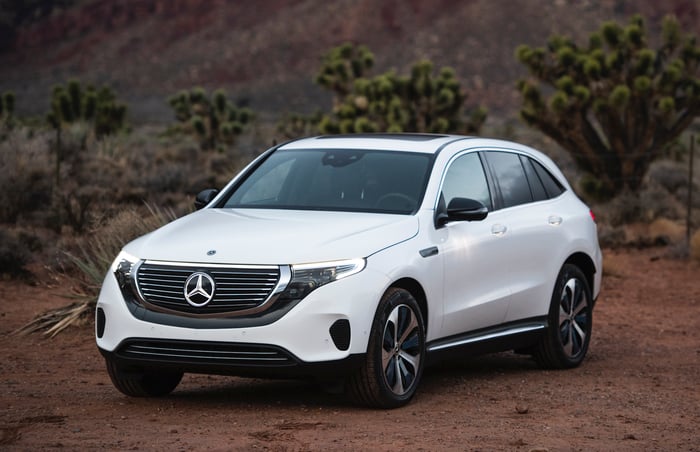 The production Mercedes-Benz EQC keeps the show car's basic shape and its battery-electric specs, but most of the futuristic details are gone. Image source: Daimler AG. 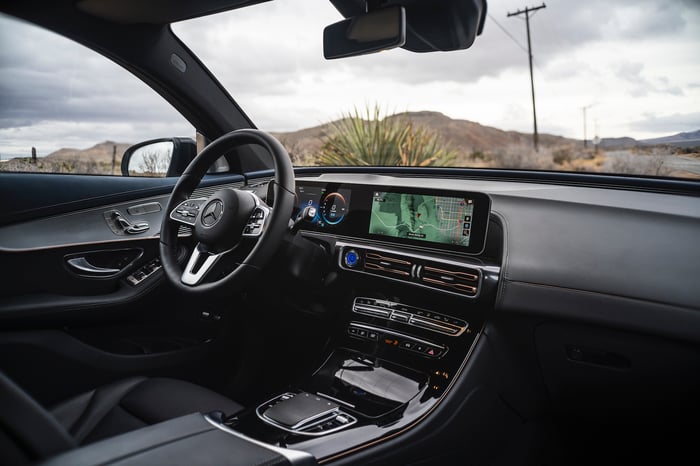 The EQC's interior retains the big touchscreen seen in the Generation EQ concept, but most of the rest is standard-issue Mercedes-Benz. Image source: Daimler AG.

It's likely that the production version of the Vision EQS will follow the same path. It'll have the same shape as the concept, with equal or better range and performance -- but it'll look and feel more like a conventional Mercedes-Benz.

Is this just another Tesla competitor?

Not exactly. While the Vision EQS is already being compared with the big Tesla sedan, I suspect that the production model will be a somewhat different thing. I expect it to be a bit roomier inside than the Tesla (especially in the back seat), with more emphasis on quiet and luxury and less on performance.

While Tesla could build a car like this -- a longer-wheelbase Model S (for more rear-seat room) with a rethought, plush interior might get close -- the Silicon Valley automaker already has an awful lot on its plate, and I don't think such a project is likely.

I think rather than jumping to a comparison with Tesla, we should see the Vision EQS for what it really is: a preview of a future battery-electric Mercedes-Benz S-Class sedan.

The upshot: It's a preview of an essential electric Mercedes-Benz

Mercedes wouldn't be Mercedes without a big, plush, high-tech luxury sedan in its lineup. While SUVs are the big sellers right now, Mercedes' brand image is built around its cutting-edge luxury sedans, especially the iconic full-size S-Class.

If Mercedes is to survive and thrive in the near-future world of electric vehicles, it needs a convincing battery-electric equivalent of the S-Class. The Vision EQS is a preview of that car -- and while the show-car details mostly won't make it to production, you don't have to squint too hard to figure out what the final version will look like.