The company will manufacture the new version of its eSprinter in South Carolina.

The Mercedes-Benz unit of German automaker Daimler (DMLR.Y 3.56%), announced Tuesday that it will be making the new iteration of its eSprinter electric vehicle (EV) in the U.S. The company said that the electric version of its Sprinter light commercial van would be produced at its factory in Ladson/North Charleston, South Carolina, in addition to two factories in Germany.

All three factories will start producing the next-generation eSprinter in the second half of 2023. The van will be built on the company's upcoming Electric Versatility Platform. This will allow Mercedes-Benz to produce the new model in several different configurations. 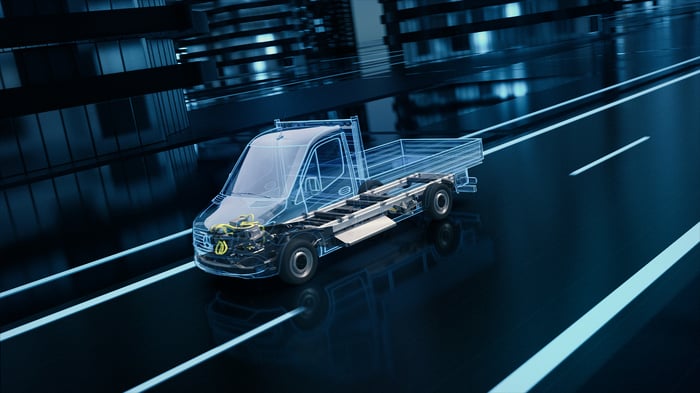 The South Carolina plant was originally built for the production of the company's internal-combustion engine Sprinter and Metris vans, and in 2018 was expanded to facilitate part-by-part production for the former models.

The U.S. factory and the two German facilities will each receive an investment of roughly 50 million euros ($59 million) for the shift to EV production.

"In the future, we will be able to quickly meet the ever-increasing demand for electrically driven vans and, thanks to our intelligent and flexible production, be able to respond very precisely to the requirements of the different markets and make optimum use of our capacities," Daimler quoted Ingo Ettischer, head of production for Mercedes-Benz Vans, as saying.

Despite those lofty words, utilizing its U.S. van plant to crank out the new eSprinters feels like a keeping-up-with-rivals move.

EVs are rapidly becoming the green automobiles of choice, and thanks to the mushrooming growth of retail and food delivery services -- particularly during the coronavirus pandemic -- the electric van market is poised for robust growth. U.S. manufacturers, notably Ford, have traditionally been very strong in the van segment and are sure to remain so as fleets continue to flip the switch to electric.