Please ensure Javascript is enabled for purposes of website accessibility
Log In Help Join The Motley Fool
Free Article Join Over 1 Million Premium Members And Get More In-Depth Stock Guidance and Research
By David Jagielski – Sep 23, 2019 at 10:28AM

The former Canopy Growth CEO is getting involved with multiple businesses, including one that's focused on making CBD pet products.

Bruce Linton has been a visionary for the cannabis industry. He helped build Canopy Growth (CGC 5.31%) into the pot giant it is today and hasn't been shy about making big moves. This includes the deal to acquire Acreage Holdings (ACRGF) in a unique agreement that's contingent on the legality of cannabis in the U.S. So when Linton speaks, investors tend to take notice.

One area that he sees as being a big opportunity for cannabis: cannabidiol (CBD) for pets. A new role that he's taking on since being fired from Canopy is with Better Choice, a company that makes CBD pet food.

A key reason Linton believes that pet food is an attractive opportunity is because it could lead to other developments. "If you start trying to figure out how to help animals, you might be able to help something with humans you haven't thought of before," said Linton.

There's been a lot of growth in the CBD pet products market, but it's still quite small. According to data from the Brightfield Group, sales totaled just $32 million for all of 2018. And that's well up from the $8 million generated the year before.

The market for pets is still in its very early stages, but Brightfield expects it could reach $1.16 billion by 2022. Worldwide, there could be even more opportunities, as the global pet market is worth approximately $130 billion. There's definitely a lot of potential for CBD pet sales to grow, especially as the popularity of cannabis continues to rise.

While pet products typically mean cats and dogs, one company based in Toronto called CannaHorse is banking on CBD being used as a way to help horses, as well. 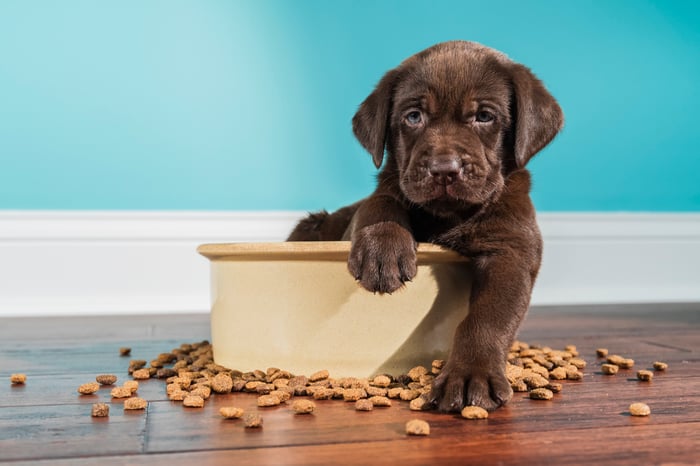 Data on CBD for humans is limited, let alone for pets. So one of the biggest obstacles facing the success of CBD pet products is getting more evidence that it's helpful in treating animals.

However, there's been a very small study that's shown success in treating dogs suffering from seizures. One of the key findings included "a correlation between how high the levels of CBD were in these dogs with how great the seizure reduction was." Unfortunately, with a sample size of just 16 dogs in the entire study, there's still a lot more work to be done to prove a strong link.

The lack of data hasn't stopped companies from getting involved in making CBD products for pets. Earlier this year, Curaleaf Holdings (CURLF -0.61%) launched products under its new Bido brand, targeted to pets. The products are made using CBD derived from hemp and are available as both drops and soft-baked bites.

Although it's not likely to mean significant growth for Curaleaf anytime soon, it's part of a bigger strategy for the company. CEO Joe Lusardi said, "The launch of Bido is just one more way we are the most accessible cannabis company in the U.S."

Curaleaf is already a dominant force in the industry, and by tapping into pet products, it can ensure it has a strong grip on all the major segments of the market. Charlotte's Web (CWBHF 0.71%), which has been heavily involved in hemp, has also been big on pet products, recently expanding its product line. Some of the products it sells are oils, topical balms, and chews.

As the demand for pet products grows, there will likely be others making a move into this segment of the market as it could prove to be an attractive niche for companies to focus on.