Ever since Walt Disney (NYSE:DIS) first announced plans for its new Disney+ service in late 2017, many industry watchers have understandably assumed the family-friendly streaming-media offering would be a shoo-in to directly challenge the dominance of established leaders in the space when it launches on Nov. 12, 2019.

To be sure, earlier this week, shares of competitor Netflix (NASDAQ:NFLX) fell after CEO Reed Hastings admitted it will be a "whole new world starting in November," pointing to Disney+ and other services set to provide "tough competition" for the attention of consumers.

We've also seen signs Disney+ could be even more disruptive than we think; recent early potential user surveys have indicated it could reach at least 60 million to 90 million subscribers -- and, in turn, achieved sustained profitability -- far earlier than Disney's initial 2024 target for the metrics. Then in late August, Disney opted to get a head start by offering all members of its D23 club (which has a free tier) a three-year subscription to Disney+ for just $141 -- that's less than $4 per month and well below its originally planned $6.99-per-month starting price. 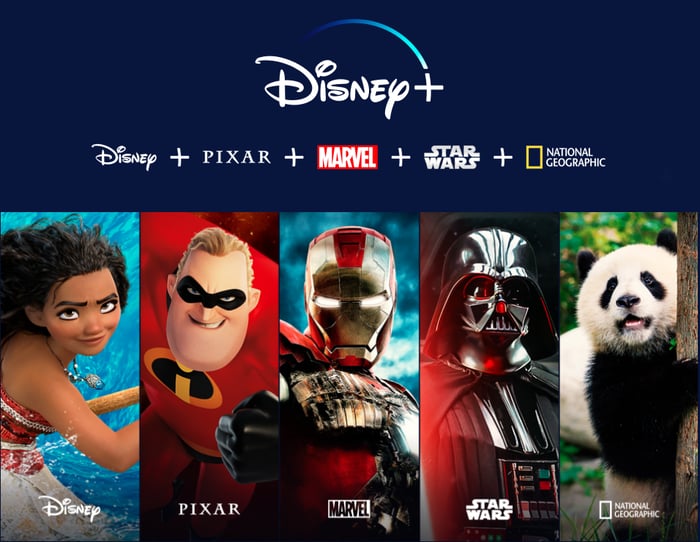 All aboard the Disney+ train

But make no mistake, the Disney+ hype machine is only just getting started.

Disney hasn't offered specific numbers just yet for how many people seized that discounted three-year opportunity. But it seems to be working from a position of strength now; late Sunday, the company sent its first mass email containing a link for early interested users to preorder Disney+ at the regular price of $6.99 per month, or $69.99 (roughly $5.83 per month) for an annual membership.

So why do I think Disney+'s marketing and early recruitment efforts are set to ramp up between now and its Nov. 12, 2019, launch date?

Remember, Disney is arguably the most experienced business in the world when it comes to hyping the brands comprising its enviable entertainment portfolio, including not only its namesake studios, TV networks, and theme parks but also Pixar, Star Wars, Marvel, and a conglomeration of new streaming-media candidates (National Geographic among them) thanks to its recently closed $71 billion acquisition of most of the assets of Twenty-First Century Fox.

That's not to mention that Disney hasn't yet begun widely publicizing its separately announced $12.99-per-month bundle -- which is on par with the most popular pricing tier offered by Netflix -- that will include a combined subscription comprising Disney+, Hulu (of which Disney currently owns 70%, with a deal in place to eventually buy out Comcast's remaining 30% stake), and ESPN+ (which exceeded 2 million paid subscribers on its own this past February).

In any case, if Disney follows the tried-and-true formulas it uses to promote its most popular blockbuster films and other entertainment products, I suspect we'll see marketing and preorder activity for Disney+ reach a fever pitch in the coming weeks -- just in time for the company to provide an encouraging update on its prelaunch progress during its next quarterly earnings call in early November. Assuming Disney+ indeed hits the ground running with millions of subscribers ready to watch at launch, it could be just the spur Disney bulls need to drive the stock to new heights.