Discovery (NASDAQ:DISC.A) has quietly made a big push into direct-to-consumer streaming video over the past year or so. While big media companies spend billions on original content and the rights to old TV episodes and films, Discovery is taking a slightly different approach. It's an approach that most resembles Disney's (NYSE:DIS) ESPN and its service ESPN+: Discovery wants to sell consumers extra content they can't get from a cable subscription.

That's most evident in its most recent service, Food Network Kitchen. The media company will offer cooking classes and food-related content from well-known food celebrities, including Bobby Flay, Rachael Ray, and Martha Stewart. It's basically capitalizing on its lineup of familiar personalities to sell subscriptions, not unlike how Disney uses its familiar characters. At the same time, just like Disney, Discovery is careful not to encroach on its big moneymaker -- pay TV distribution fees -- by not offering the same content available on its cable network.

Discovery, however, doesn't have the same mass appeal as Disney, which requires it to make other considerations in its strategy. 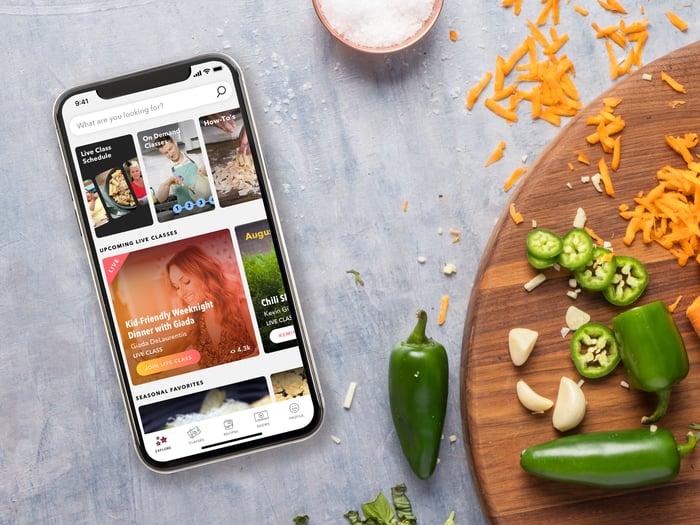 The challenge for Discovery is that its brands don't drive nearly the same fanaticism as Disney's. It seems like every film Disney produces these days grosses $1 billion at the box office, and pay TV distributors won't sell as many subscriptions if they don't have a deal to distribute ESPN or The Disney Channel.

To be sure, Discovery doesn't envision itself hitting the 60 million to 90 million global subscribers Disney believes Disney+ can attract over the next few years. But it's certainly hoping to reach numbers similar to the 8 million to 12 million the House of Mouse expects ESPN+ to reach in the same period.

Discovery specializes in unscripted and lifestyle content. It's content that's nice to have, but very few consumers consider it a must-have. It fits well into the passive viewing experience of channel surfing (or the modern equivalent of tile surfing in on-demand platforms), adding value to a video product, but it's often not driving the demand itself.

Netflix, for example, has started investing more in unscripted series. Although those series aren't driving sign-ups for its service like its shows Stranger Things or The Crown, they're helping improve subscriber retention.

The challenge for Discovery is that its brands -- and the brands of its celebrity lineup -- might not be strong enough to drive subscriber growth by themselves.

Discovery seems to understand that it doesn't have the brand strength to stand on its own in a direct-to-consumer world. That's why its integration of Food Network Kitchen with Amazon.com (NASDAQ:AMZN) is particularly important for investors to note.

Amazon featured the new video service at its recent hardware event, showing the service as part of its new lineup of Echo Shows, which include video screens. The online retailer stands to benefit from a revenue share agreement with Discovery similar to its other deals with media companies that sell subscriptions through Amazon Channels. It may also generate revenue from viewers placing orders for ingredients through Amazon Fresh.

The ability to partner with other companies for promotion and distribution will be key for Discovery to build an audience. Amazon is a great partner because it offers both distribution and the ability to sell products through its marketplace. Future direct-to-consumer services from Discovery may fit the bill for Amazon as well, such as the forthcoming home improvement and decorating channel from Chip and Joanna Gaines. But not all of Discovery's content is a fit for Amazon's unique advantages, and that could present a big challenge for the media company.

Building a new business without destroying the old one

Discovery has to take a unique approach to streaming because it can't afford to disturb its core business of selling content to pay TV distributors. Its "other" revenue accounted for less than 5% of its total sales last year, with the rest coming from distribution fees and advertising.

Disney's media networks might account for a big chunk of its operating income, but the company has a lot of profitable revenue sources outside of the television channels. That allows it to take on more risks and invest more in streaming content compared to a company like Discovery.

Discovery's ability to thrive as more consumers cut the cord and focus on streaming services will largely come down to its ability to attract the right distribution partners and deliver the right content. It has to be mindful of not cannibalizing its cash cow and accelerating the trend toward cord-cutting by offering the same content it offers on its bundle of TV networks. That will curb its direct-to-consumer products' already-limited appeal, but management is hoping its brands, content lineup, and distribution partnerships are just strong enough to sustain it as the market continues to shift toward streaming.