The bounce Fitbit (NYSE:FIT) shares made on rumors that it was putting itself up for sale has since faded. But, the proverbial cat is out of the bag. The fitness tracker company finally seems to have accepted it can't continue as a viable entity on its own, particularly now that Apple (NASDAQ:AAPL) has launched a more moderately priced smartwatch.

Investors are torn, of course. On one hand, agreeing to an acquisition will eliminate any chance of a home-grown turnaround that validates the company's original vision. On the other hand, folding itself into a suitor's operation would be a graceful exit from a tough situation competing against the world's largest tech companies.

Of the two camps, the latter is seeing matters more clearly. Fitbit would be best served by selling itself to a better-diversified and deeper-pocketed player that can fully leverage the respected brand name. 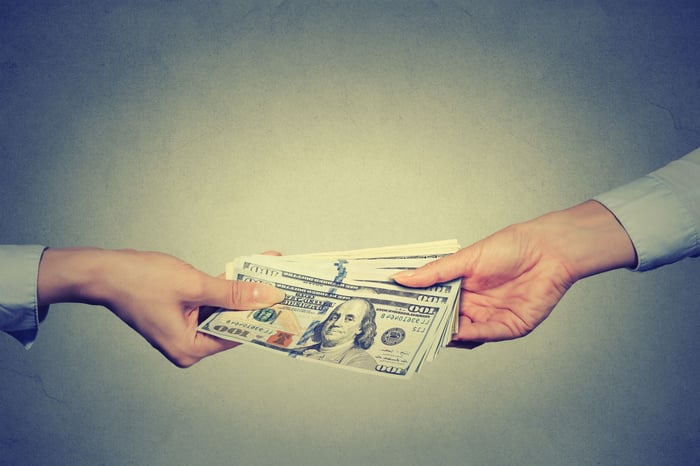 Although it wasn't the first to the market with a wrist-worn fitness tracker, it's arguably the company that brought the idea into the mainstream and made the most of its commercialization. It also didn't take Fitbit long to come up with an answer to Apple's smartwatch lineup, launching its Ionic smartwatch in 2017. The Versa and Versa 2 have been respectable follow-ups.

However, after being in business for more than a decade, Fitbit is still losing money -- lots of it -- with no end in sight. Revenue peaked in 2016. Although revenue started to improve a couple of quarters ago, higher selling prices for its smartwatches should have pumped up the top line to a much greater degree. It's not been a matter of a poorly conceived product base or ineffective marketing. Not everyone cares about wearables, but most everyone at least recognizes a certain utilitarian nature to them. While Apple is a better-recognized brand name, Fitbit is a respected name among smartwatches and a premier name among fitness trackers.

It's just not enough, particularly now that Apple has brought a $199 smartwatch to the market.

Both Versas and the Ionic will occasionally go on sale at a lower price, although not dramatically lower. Even if they don't though (and even if consumers don't want the lowest-tier series 3 smartwatch from Apple), prices are close enough to make any price differences irrelevant.

And when pricing isn't an issue, no company wants to stand toe-to-toe with Apple.

There are plenty of reasons that Fitbit is losing market share, including the aforementioned reality that the Apple brand is one of the most recognized and well-respected brand names in the world. Perhaps more importantly in this case though, Apple can bring an entire ecosystem to the table that Fitbit can't.

Apple's smartwatch works in tandem with an iPhone. Not only are iPhone owners familiar with the device's operating system, a recent survey taken by SellCell determined that 90.5% of current iPhone owners intend to buy another Apple device when it's time for an upgrade. Adding to the functionality of Apple's iOS via a smartwatch only bolsters that loyalty. Fitbit, meanwhile, installs its own operating system on its smartwatches, limiting the number of apps available and putting users on yet-another OS learning curve.

Market share numbers certainly jibe with the theory. According to data from research outfit Canalys, Fitbit lost significant share during the second quarter, from 28.3% of the wearable band market a year earlier to only 24.1% for the three-month stretch ending in June of this year. To its credit, it picked up a little bit of market share within the fitness tracker segment, but that's not enough to offset ground lost on the smartwatch front.

Put it all together

Kudos to the company for bringing the fitness product category to maturity, and then taking a pretty good poke at much bigger and better players, like Apple, that beat it to the smartwatch market. Fitbit's products are everything they're supposed to be.

That's arguably where the company went wrong though. It was never just about the products. It's always been about a digital ecosystem of apps, services, communications, and hardware. Apple has always done those things well, but has turned up the heat on the strategy of late. It's got a reach that's deep and wide enough to keep Fitbit at bay, and what Apple can't secure, Samsung (OTC: SSNLF) seems able to.

That's why Alphabet (NASDAQ:GOOG) (NASDAQ:GOOGL) flagship Google has been pegged as one of the ideal -- and perhaps most likely -- buyers of Fitbit. It's already got a digital ecosystem of two billion users, and is the name behind the world's most popular mobile operating system. It could do much more with the Fitbit name than Fitbit could do for itself, and wouldn't necessarily have to turn a profit doing so.

Whatever the case, if it was going to happen for Fitbit on its own, it should have started to happen by now. It's time for plan B.