The United States has the largest stock exchanges in the world, but there are plenty of other countries that boast strong companies. Despite the trade war, many of those companies based overseas have products that will soon find their way into your hands. Indeed, some of them may have already done so. In many cases, investing in these international companies isn't much different from buying top domestic ones, as many of them even trade on U.S. exchanges.

As the great Peter Lynch famously said, "Invest in what you know." So if you're interested in getting some international exposure in your portfolio, a great way to start is to learn which companies are involved with things that may become part of your everyday life. Lynch would advise getting to know the company in addition to its products before committing your cash to it, but you have to start somewhere. These three international companies just may be worth looking at from that perspective. 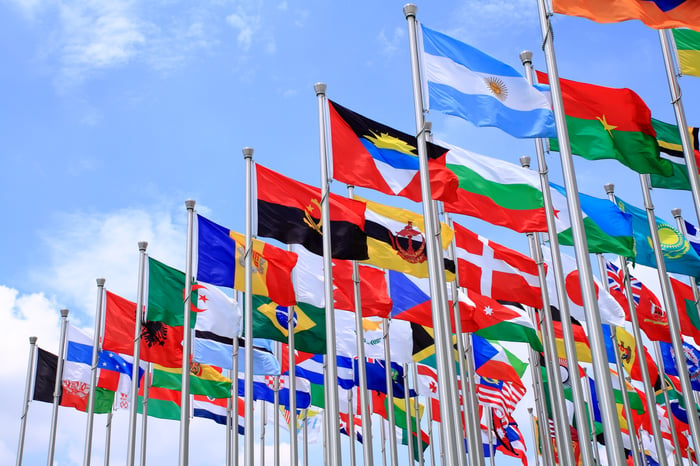 An energy giant you may already be using without realizing it

Canadian energy pipeline company Enbridge (NYSE:ENB) has been the largest energy infrastructure company in North America since it acquired Spectra Energy a few years ago. With around 17,000 miles of liquids/petroleum pipelines and around 26,000 miles of natural gas pipelines crisscrossing the continent, chances are strong you regularly come across something that its network has carried.

After all, not only does the oil and gas crossing its pipelines get used for electric generation, heating homes, and transportation, but also as the feedstock for products that contain plastic. As a result, it would almost be a larger surprise if you weren't already impacted in some way by Enbridge -- even if you don't realize it directly.

From an investor's perspective, American investors who own Enbridge shares face a mandatory Canadian withholding tax on the company's dividends, unless they own those shares inside an IRA. With a yield around 6%, that's a fairly substantial impact that may surprise you if you don't expect it.

Believe it or not, Budweiser

Despite Budweiser's historic legacy as "The Great American Lager," that brand is actually owned by Belgian company Anheuser-Busch Inbev (NYSE:BUD). If Budweiser isn't your particular brand of beer, Anheuser-Busch Inbev's portfolio of beverages also includes brands like Beck's, Corona, Modelo, Michelob, and Stella Artois. In addition to its stable of large brands, the company also plays in the microbrewery space, probably based on the theory that "If you can't beat them, buy them."

From an investor's perspective, Anheuser-Busch Inbev looks like it currently trades as if it were fairly valued based on a discounted cash-flow model that assumes it hits its analysts' expected growth rates. That would be a far better growth rate than the company has achieved over the past five years. The market rarely offers a discount on large, well-known companies, so a price near fair value indicates that investors may be skeptical of the company's ability to deliver sustained growth.

Still, even If Anheuser-Busch Inbev doesn't deliver spectacular growth, its dividend yield of around 2.1% looks to be well covered by its earnings. With a dividend yield right in line with long-term Treasury bonds, it may be worth considering as an alternative that, while riskier than bonds, does also offer some potential growth on top of the yield. Just beware that if things happen to turn very sour, a company's dividend can get cut.

A great company to have around if you get sick

Teva Pharmaceutical Industries (NYSE:TEVA) prides itself on being the No. 1 company worldwide when it comes to generic medications. That makes this Israeli company a great one to have around in the event you are sick and need medicine to help your recovery. That said, somewhat ironically for a company known for its strength in generics, Teva's business has been challenged since its own blockbuster drug, Copaxone, started facing generic competition.

Teva proved itself to be woefully unprepared to handle the loss of revenue from Copaxone, and it was forced to reduce -- and eventually completely suspend -- its dividend as that money went away. In addition, the Copaxone situation forced the company's then-CEO to step down before a permanent successor could be named. The loss in revenue, combined with the debt from an expensive acquisition, left Teva so heavily leveraged that it was forced to undertake extensive layoffs to avoid bankruptcy.

Needless to say, from an investor's perspective, Teva's shares are well off their highs, trading at around a 10th of the company's former valuation. An investor considering the company today needs to recognize that it is a business that has gone through a tremendous struggle and is now trying to rebuild. Still, with a market price only around three times the company's estimated forward earnings, shareholders do have the opportunity to profit if the company does deliver on its rebuilding plan.