Match Group, (NASDAQ:MTCH) the company behind dating apps Tinder, OkCupid, Match.com, and several others, is in trouble with the Federal Trade Commission, and its stock price is down about 7.9% in the past week. But some investors are using the decline in shares as a buying opportunity.

They are focusing on the strength of its Tinder app and overall growth rather than worry about the lawsuit and new competition from social media giant Facebook (NASDAQ:FB). Here's some more on what's going on at the moment and why Match stock is currently available at a discount.

Match.com offers free account sign-ups for most of its dating apps, but it requires a subscription plan for users to message each other on the platform. According to the FTC, from between 2013 and the middle of 2018, Match tricked consumers into signing up for a subscription to view what they thought were messages from potential suitors. The FTC says many of those messages were actually from fake accounts. Consumers were also offered discounts on the subscriptions in emails in which it claimed a user was interested in connecting.

"Consumers reasonably believe, based upon these advertisements, that other Match.com users are interested in establishing a possible dating relationship with them. As a result, consumers have often purchased Match.com subscriptions from defendant," the FTC wrote in its complaint. "Hundreds of thousands of consumers subscribed to Match.com shortly after receiving a fraudulent communication." According to the FTC, from June of 2016 to May of 2018, consumers purchased 499,691 subscriptions within 24 hours of receiving an ad alleging a fake love interest. 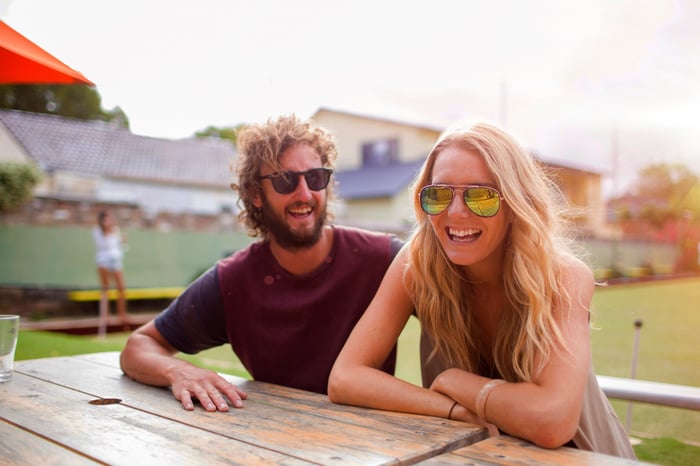 Match isn't taking the lawsuit lying down, which could be why the stock hasn't fallen more over the allegations. In a statement on its website, Match Group claimed the FTC "misrepresented internal emails" and used "cherry-picked data" to make the claims against the company. Match said it plans to "vigorously" defend itself in court.

"Fraud is never good for business, which is why we spend so much time, money and emotional capital to fight it," wrote Match. "The vast majority of the users that the FTC characterizes as 'fraudulent' are not romance scams or similar types of fraudsters, but spam, bots and other users attempting to use the service for their own commercial purposes."

Match's Tinder growth may insulate it from the FTC suit

While the specter of a government lawsuit in which a company is accused of committing fraud against hundreds of thousands of people is never good, it does come at a time when Match's business is booming, thanks in large part to its popular Tinder dating app.

Match reported revenue of $498 million, up 18% year-over-year, also beating Wall Street's expectations. Looking out to its third quarter, the online dating company forecast revenue between $535 million and $545 million. Analysts were looking for third-quarter revenue of $521 million.

Despite the growth at Match, it's not all smooth sailing ahead for this tech stock.

Investors are worried about the competition it faces, which recently got a little bit fiercer. Earlier in September, Facebook announced the U.S. launch of Facebook Dating, a new free service aimed at hooking up the more than 200 million Facebook users who claim to be single. The service suggests possible matches from Facebook users who opted in. Users can like a profile or comment on it to start a connection. Tinder depersonalizes it a bit. All you have to do is swipe right or left to show your interest or lack thereof.

If Facebook Dating takes off, it could be a formidable competitor to Tinder and Match's other dating apps. Consumers could grow skeptical of connections made on Match's dating apps if the FTC lawsuit gets enough attention. That's not to say Facebook has a better reputation, given its troublesome track record on protecting its users' data.

Despite the challenges, Match bulls are undeterred. They point to Tinder's growth, which isn't exhibiting any signs of slowing, as a big reason to like that stock. Tinder could even be enough to help it ride out the FTC storm. The FTC did say Match had stopped the practice, and it didn't single out Tinder, presenting its parent company with a bit of cover.