Please ensure Javascript is enabled for purposes of website accessibility
Log In Help Join The Motley Fool
Free Article Join Over 1 Million Premium Members And Get More In-Depth Stock Guidance and Research
By Jason Lee - Oct 4, 2019 at 6:45AM

The U.S. Army’s shift in focus toward "near-peer" threats like Russia, North Korea, China, and Iran creates equipment and upgrade demands regardless of whether conflict breaks out.

BAE Systems (BAES.Y -1.07%), a U.K.-based defense contracting firm that regularly sells to the U.S. military, recently landed a $318 million contract to upgrade M88 tank-recovery vehicles (effectively tow trucks for tanks) for the U.S. Army. For a company with 18.4 billion pounds in annual sales in 2018 ($22.6 billion at the current exchange rate), this might seem like a drop in the bucket, but shifting sands in the way the U.S. Army plans to train and fight could increase future demand for BAE's M88, which can be thought of as the military's version of AAA.

BAE systems' land-based products segment, which includes the M88, accounts for 17% of the company's sales. This latest contract reportedly includes eight prototypes of an upgraded M88 to be delivered for testing by 2022. One vehicle of the upgraded M88A3 configuration will be able to recover the latest version of the Abrams tank, an improvement over the fact that it takes two M88A2 vehicles to do so.

A shift in tactics

In response to the terrorist attacks of Sept. 11, 2001, the U.S. Army shifted its focus toward counterinsurgency operations targeting terrorist groups at home and abroad. However, the global climate is changing, and the Army is getting back to its roots by adapting to the reemergence of conventional threats from countries including Russia, North Korea, China, and Iran. Evidence of this shift began surfacing with the 2017 release of U.S. Army Field Manual 3-0, Operations, which shifted the Army's training and preparation to focus on large-scale ground war. 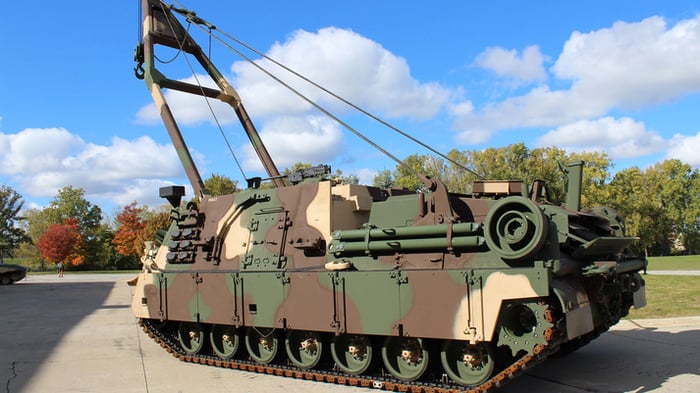 Further proof is available in the DoD's official National Defense Strategy released in January 2018. Deputy Assistant Secretary of Defense Elbridge Colby described the importance of the shift by saying the main problem currently facing the military was "erosion of U.S. military advantage vis-a-vis China and Russia, which, if unaddressed, could ultimately undermine our ability to deter aggression and coercion and imperil the free and open order that we seek to underwrite with our alliance constellation."

In short, the U.S. Army is shifting away from small-scale counterinsurgency operations and preparing for large-scale ground battles with comparable foes.

What does this have to do with BAE Systems?

Tanks. Tanks fight ground wars. The U.S. Army has permission to purchase 135 brand-new M-1A2C Abrams tanks this year and has plans to buy 174 more next year to better align with the changing strategy. These are the tanks the new M88 models are designed to recover. Additionally, the Army has begun shifting several non-tank brigades into armor brigade combat teams (ABCTs) which are the major tank units that give the Army its raw power.

More tanks mean a greater need for effective recovery vehicles. If tanks are stuck, rolled, have thrown track, or broken down, they can't train or fight. While it's tough to predict where the U.S. Army is going to spend its money next, I wouldn't be surprised to see it pour more cash into sustainment pieces like the M88.

The M88 is a crucial piece of keeping U.S. tanks in the fight, and I expect the U.S. military to spend what it needs to keep those 120mm tank main guns singing. As the Army's choice for M88 sustainment support since 2006, expect to see the relationship with BAE continue as the demand increases.