If you’re searching for a feel-good stock, see how Etsy, the online craft marketplace, scores on The Motley Fool’s ESG framework.

Etsy (ETSY -5.73%) is a two-sided e-commerce marketplace that prides itself on delivering special items in a sea of commoditized options. When thinking of a gift for any occasion, be it a bridal shower, a housewarming, holiday, or any other important moment, it strives to be top of mind for consumers. Etsy boasts more than 60 million unique items, 43 million buyers, and 2.3 million sellers on its platform.

After Etsy was founded in 2005 by three friends in Brooklyn, New York, the road it has taken to get where it is today has been bumpy at best. Within two years, two of the original founders were gone, and by 2011, the remaining founder, Rob Kalin, left as CEO and was replaced by Chad Dickerson, a former Yahoo! executive who was instrumental in Etsy's IPO in 2015. However, the newly public Etsy didn't respond well to the pressures of Wall Street. In May 2017, Dickerson was ousted as CEO, and the first round of 80 layoffs arrived. Josh Silverman, the current CEO, arrived days later. Silverman came from a tech and commerce background, having worked at Skype, American Express, and eBay before joining Etsy's board and ultimately assuming the CEO position. 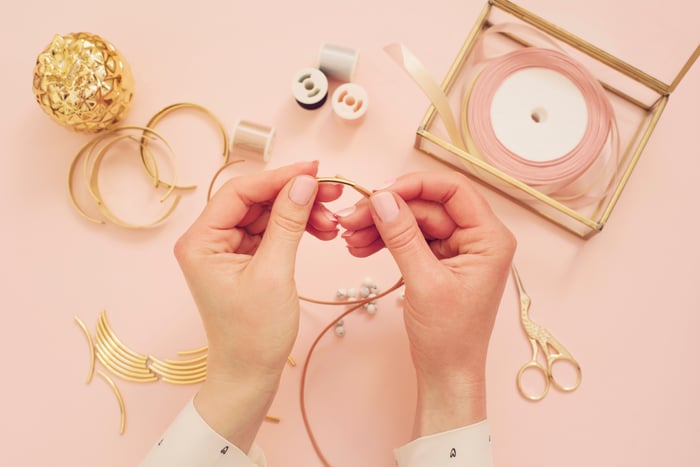 In the two years since its C-suite shake-up, the company has hired a new chief financial officer, chief technology officer, and multiple additional senior vice presidents. The stock has quintupled, currently boasting a market cap of $6.5 billion, and continues to deliver on the mission statement it implemented in 2017: "Keep commerce human." Etsy relentlessly refines its offerings, its treatment of employees, and its craft in the eternal quest to balance doing well as a company with doing good for the world.

Etsy is prioritizing environmental, social, and governance factors as it continues to grow. Here's how it scores on The Motley Fool's 10-question ESG Framework.

1. Does the company treat its employees, customers, community, and other stakeholders well?

Yes. As a two-sided marketplace, Etsy has a lot of stakeholders. Most of its store operators are female (87%), and 75% of sellers report that they consider their shop a business. As a result, Etsy supported the creation of 1.52 million jobs in the independent-worker economy last year. As a new fee structure was being determined by the executive team, Etsy decided to hike the transaction fee, not the listing fee, so sellers were only affected if they were making sales. This shows the dedication of leadership to enhancing the profitability of Etsy contributors. And customers feel strongly that Etsy adds value not provided by other e-commerce offerings. In fact, 78% of buyers agree that Etsy provides them with items they couldn't have found elsewhere.

Etsy has 874 full-time employees and seems to treat them well. It has a 36:1 CEO-to-median employee pay ratio, which is much lower than the average corporation's ratio of 287:1. Etsy's median employee makes $173,680 -- much higher than the national average. Etsy has a small workforce, a majority of which are engineers, which helps explain why the median pay is so high. It's also important to note that the median employee does not reflect the amount that a seller at Etsy is making. The sellers are fully independent and not considered employees or contractors.

Finally, Etsy encourages its employees to help the world around them through volunteering and philanthropy. In 2018, Etsy employees donated 2,700 hours of volunteer time.

Areas for improvement: Etsy claims to be in frequent contact with its sellers, but some business owners have claimed unhappiness with the pursuit of typical e-commerce expectations, like free shipping. Continuing a dialogue with all stakeholders when making these kinds of decisions is of paramount importance to Etsy's success.

Yes. Etsy is the first global e-commerce company to offset 100% of its carbon emissions from shipping. Additionally, it is a member of the RE100 and plans to power operations with 100% renewable electricity by 2020 while reducing the intensity of energy use by 25% by 2025. In 2018, it procured 58% of electricity from renewable resources and ran zero-waste operations globally, which indicates a commitment to reducing its overall environmental impact.

Yes. Etsy's company and culture prioritize diversity and inclusion in its hiring practices and initiatives. In fact, 56% of its employee base is female, 50% of its board and a majority of its executive team are female, and the company bucks the industry standard by having female engineers. In 2018, Etsy commissioned a third-party pay-equity study, which determined no influence of age, race, or gender in pay. Etsy is recognized for its diversity and inclusion efforts by Bloomberg, which included the company on its Gender Equality Index.

Areas for improvement: While female leadership is soaring at Etsy, a small percentage of employees is part of other underrepresented groups. One of the company's goals for 2023 is to double the percentage of black and Hispanic employees in its workforce, which is another sign that its priorities are aligned with diversity and inclusion.

Maybe. Etsy has a single share class structure and an independent board chair and met with shareholders more than 400 times in 2018. It also has 26-week paid family leave (agnostic of gender) and other employee perks that suggest strong corporate governance principles.

Areas for improvement: Etsy has a staggered board, meaning only part of the board is up for re-election each term, and supermajority voting provisions. It doesn't have annual elections, and the directors are elected using plurality voting. This makes it difficult to vote out an entrenched board that might not be acting in the best interest of stakeholders.

In 2019, the say-on-pay vote (in which shareholders vote on the compensation package) was approved by 59% of shareholders, down from 96% voting for executive compensation in 2017. The board needs to work on compensation to make sure it is aligned with the needs of shareholders and work on incentivizing top leadership based on long-term metrics. Currently, they are paid based on gross merchandise sales and adjusted EBITDA. It would be helpful to use a return-based metric, such as return on invested capital (ROIC).

Yes. Etsy is giving flexible employment to individuals seeking it, which is best shown by its mission statement: "Keep commerce human." Its identity is rooted in ESG, with its sustainability report embedded in its annual report. While shipping is not the most environmentally friendly activity, Etsy is committed to continuing to offset its carbon emissions caused by shipping.

Maybe. Etsy has a net cash position of $257.4 million but a low interest coverage ratio of 4.96. Additionally, it took on $100 million in debt to help fund its acquisition of Reverb, a musical instrument marketplace. Etsy can probably handle such a low coverage ratio because it has such an asset-light business model and because it has net cash and growing FCF, but that still places it in the "maybe" category.

Yes. Etsy has a five-year revenue CAGR of 35.3% and a gross margin of 69.3%, showing that its fast growth comes with a high profit margin. As e-commerce becomes more and more popular, Etsy stands to profit from this trend. In addition to this, as online shopping becomes more commoditized and people crave intimate and special gifts, Etsy will be top of mind. It also recently acquired Reverb, increasing its exposure to new revenue streams. Etsy seems poised to profit in the changing e-commerce landscape.

Yes. According to New Constructs, Etsy's ROIC has increased for the past four years. 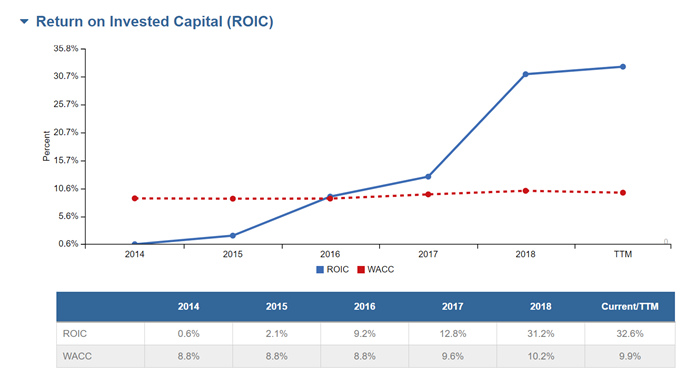 The New Constructs platform uses a DuPont analysis to show that Etsy's rising ROIC is being driven by both higher net operating profit after tax (NOPAT) margins and higher invested capital turns. 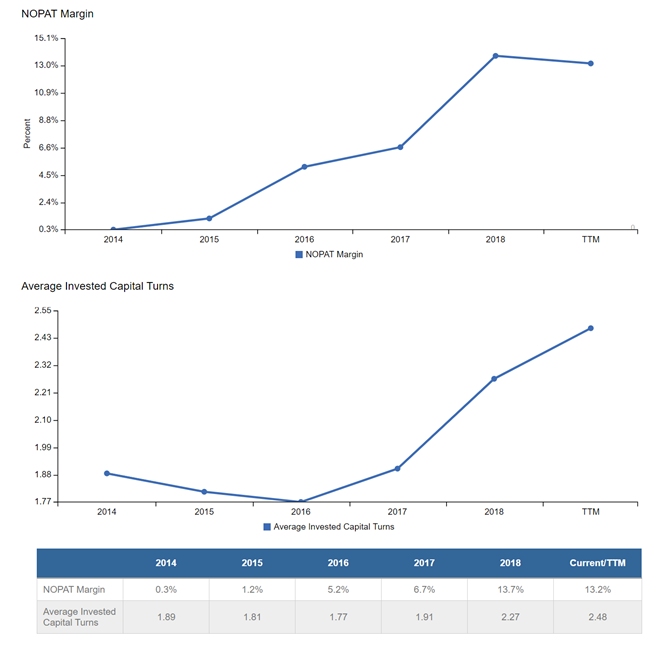 Etsy should be able to maintain its high ROIC due to its asset-light model and its competitive advantage, which are shown through its network effects, strong brand, and scale.

Yes. Silverman, the CEO, embodies the 4 Cs we look at when analyzing management: compassion, candidness, capability, and commitment. His enthusiasm for Etsy is palpable in conference calls, investor days, and every interaction he has with shareholders, showcasing his commitment to the company.

A recent problem Etsy has faced is its shipping costs, which were found to be a detriment to overall customer retention, and Silverman has been open and transparent in the strides Etsy is taking to face the challenge, showing candidness. His capability stems from his long career in e-commerce, financials, and technology. Finally, his compassion for employees is shown in his executive decisions to help the store owners reach their maximum profitability.

Areas for improvement: It would be great to see compensation tied to metrics that drive long-term business value such as free cash flow or ROIC.

10. Does the company have a medium or lower risk profile?

Yes. There is some inherent disruption risk in the crowded e-commerce space, with Amazon (AMZN -2.26%) as a dominant player. However, Amazon attempted to enter the handmade marketplace in 2015 with Amazon Handmade. This portion of its website did not gain the intended traction, and Etsy still grew. E-commerce behemoths don't seem to be as inherently powerful in this niche, where Etsy continues to defend its moat.

Additionally, there is a risk that if consumer spending habits shift or if there is less discretionary spending, people will buy special, pricier gifts less often. However, Etsy has the scale and network effects that firmly entrench it as the hub for "special." Etsy falls into the lower risk category.

Etsy scores a 9 out of 10 on The Motley Fool's Framework for ESG Compounders (a score of "maybe" is equivalent to a score of 0.5). It is a strong company that appears to strive intentionally to make its marketplace the best it can be for purveyors of handmade goods. There are areas for improvement, but Etsy seems to be balancing profitability, scale, and strong ESG principles.