The company had a terrific month in the U.S. market in August, selling almost 174,000 vehicles for a year-over-year gain of almost 18%, its best-ever monthly sales result in the United States. Better yet for investors, that increase was driven in part by strong sales of the mainstay Civic and Accord sedans, demonstrating that the two models still have appeal in a market that has largely turned away from sedans. 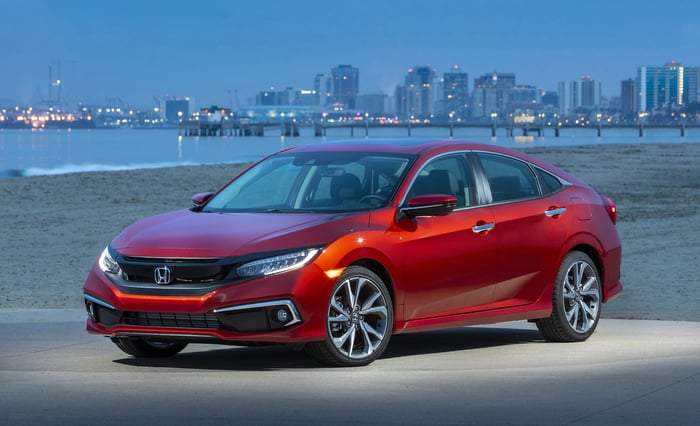 The market for sedans may be weak, but Honda's Civic is doing well in both the U.S. and China. Image source: Honda.

Honda bucked another trend in August, posting a sales gain in China, where the mainstream light-vehicle market has been in decline for months. Its sales in China rose 5.9% to just over 124,000 vehicles, driven by strong demand for the compact CR-V crossover SUV and, again, the Civic sedan.

Taken together, the results suggested that Honda's current products have the competitive strength to generate growth in sluggish markets, a good sign for investors.

U.S. sales fell back to earth in September, declining 14.1% from the year-ago period. That wasn't a surprise after the blowout August likely pulled forward sales from customers who might otherwise have made purchases later in the year. But there was reason for cheer despite the decline, as sales of both the Civic and CR-V remained strong.

Despite the September decline, Honda ended the quarter with a 2.4% sales gain in the U.S. On balance, that bodes well for the company's bottom line. We'll know more when it reports earnings in a few weeks.