Last month, Canberra became the first city in Australia to legalize marijuana for recreational use. While many places around the world have legalized medicinal marijuana, there just hasn't been the same appetite for recreational pot, at least not yet.

That's what makes the vote by the Australian Capital Territory (ACT), where Canberra is located, to legalize recreational pot such a big move. The question now is whether it will lead to legalization for the whole country.

Canberra is similar to many U.S. states

The ACT will permit individuals to use pot as well as grow it. The law takes effect Jan. 31, 2020. As in the U.S., marijuana remains illegal at the federal level, meaning that federal laws could still pose problems for cannabis customers in Canberra and the ACT.  In the U.S., the federal government has turned a blind eye to what individual states have been doing on marijuana, but there's no guarantee that the same will happen in Australia.

Will legalization at the federal level be next?

It has been more than three years since legislation was passed to legalize medical marijuana in Australia. There isn't any movement to suggest that the legalization of cannabis for recreational purposes is on the horizon anytime soon. But there's likely a lot of interest in doing so; data from a 2016 report indicates that cannabis was used by one in 10 Australians over the past year, a number that's likely to have grown since. 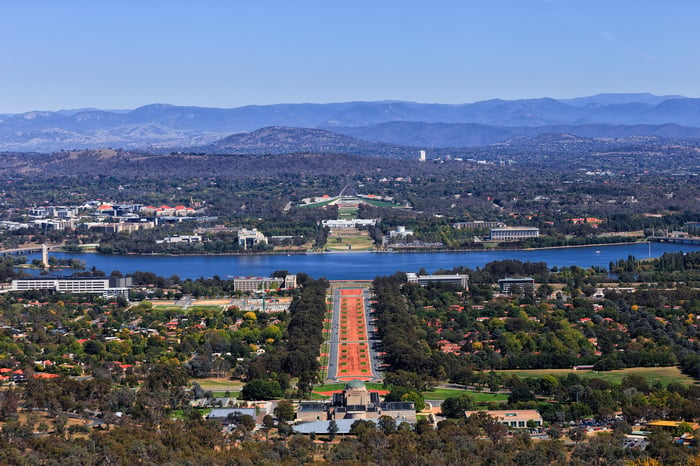 A possible catalyst in Australia would be if New Zealand votes to make pot legal next year. With Canada and a number of U.S. states having done so -- and nearby New Zealand potentially being next -- Australia would have ample case studies to decide whether it wants to follow.

But recent polling numbers suggest the vote could be very close in New Zealand, with 52% opposed to legalization.

One company that could benefit significantly

Aphria (NASDAQ:APHA) made an investment in Australian-based Althea in early 2018 and could stand to benefit if legalization comes to pass.

The investment gives Aphria access to a market that could become more lucrative than ever. Earlier this year, Althea obtained a manufacturing license in the country, making it even easier for Aphria to tap into the market since it could simply help coordinate production without having to ship products directly into the country.

Growing around the globe has been one way that cannabis companies like Aphria have looked to obtain first-mover advantages, securing deals with various companies. In Aphria's case, it could pay off in a big way. Even if Canberra is the only major city in Australia that legalizes pot, it could bring in a lot of pot tourists, not unlike what has happened in Colorado and in other parts of the U.S. that have legalized marijuana. On its own, Canberra's population (around 400,000 people) won't make it a hot market, but it could become a hub for those in the Oceanic region, giving them fairly close access to legal pot.

Although Aphria would love to be able to sell recreational products in the U.S., the Australian market would be a great consolation prize -- and make it very appealing to investors.