Over the past 30 days, the broad-based sell-off in the legal marijuana space has accelerated in a big way. Numerous top dogs in the industry have seen their market caps shrink in drastic fashion during this period. However, the next wave of legalization in Canada (a.k.a. Cannabis 2.0) -- which will allow the sale of cannabis-infused beverages, edibles, and vapes by mid-December -- could prove to be an inflection point for the industry as a whole. 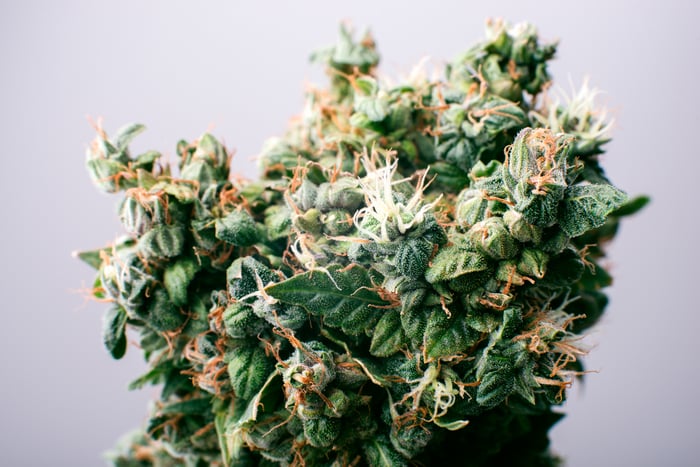 Canada's OrganiGram Holdings (NASDAQ:OGI) and Aurora Cannabis (NASDAQ:ACB) are two names in particular that could benefit tremendously from this industrywide tailwind. Which of these top pot stocks is the better buy right now? Let's take a look at how these two pioneers of the legal marijuana industry stack up to find out.

OrganiGram is an Atlantic-based grower that sports one of the industry's most efficient operations. Thanks to its proprietary three-tier growing system, the company easily has one of the highest yields per square foot and one of the lowest costs of production among Canadian growers. OrganiGram is also developing a unique nano-emulsification as a quick-acting additive for beverages, a line of premium cannabis-infused chocolates, as well as a portfolio of vape concentrates.

OrganiGram, in kind, stands to be one of the only Canadian pot companies to turn a profit on a consistent basis during the industry's early years. Nonetheless, the company's shares have yet to capture the market's imagination. OrganiGram's stock, after all, is presently trading somewhere between 3.4 and five times next year's sales (depending on which analyst estimate you go by), which is among the lowest within its peer group.

The big knock against OrganiGram is its size. Even though recreational marijuana has only been legal in Canada for about a year, the industry is already undergoing a rapid consolidation phase. In effect, the era of "big weed" isn't that far off in the future. OrganiGram, for its part, may struggle to compete against large-cap entities with vastly superior resources and significant international exposure. And that's probably the main reason behind OrganiGram's rock-bottom valuation.

Aurora is the epitome of big weed. With 17 acquisitions and numerous strategic alliances in hand, the company has now overtaken Canopy Growth as Canada's largest cannabis cultivator. The company has also built out a leading position in the medical marijuana space, a top-tier adult-use recreational portfolio, and one of the largest international footprints in the entire industry (25 countries and counting). Aurora could thus come to dominant several large European cannabis markets -- and market segments -- in the next decade.

Despite its rapid expansion, however, Aurora may not turn a profit on a consistent basis for another 12 months -- if not longer. That's a big problem for a few reasons. First off, Aurora's stock has long garnered a top-shelf valuation. As things stand now, however, the company's rich premium simply isn't supported by its underlying fundamentals.

Next up, Aurora may have to make another large acquisition in order to secure a true jumping-off point into the all-important U.S. cannabis market. That could mean doling out a few billion to grab a premium U.S. dispensary company. Unfortunately, Aurora won't be able to simply tap its growing revenue stream to make such a move -- implying that it would have to dilute shareholders in order to pull this off.

OrganiGram and Aurora arguably both warrant serious consideration for long-term-oriented investors. Each of these pot companies has several unique characteristics that give them a clear leg up over the broader field, after all. But if you can only buy one stock, Aurora is the safer play at the end of the day, making it the better buy.

Aurora has all the ingredients in place to attract multiple Fortune 500 partners as the industry matures, and its sprawling infrastructure should translate into numerous operating synergies across the value chain. OrganiGram, on the other hand, will eventually have to find a viable way to compete as a niche player in a field dominated by a small handful of multinational giants.