Quantitative easing, the next chapter?

Raise your hand if you remember "quantitative easing," the controversial U.S. Federal Reserve program initiated during the financial crisis. It was intended to force interest rates down and attempt to convince consumers to consume, by buying up assets and storing them on the federal balance sheet.

Actually, never mind: You don't need to remember quantitative easing. You can just watch it happen.

This morning, Reuters reported that the Federal Reserve has begun buying "about $60 billion per month in Treasury bills," in order to ensure the banking system has "ample reserves" of cash available for lending -- and in response to "recent disruptions in short-term money markets that pushed the target federal funds rate to the top of its range." 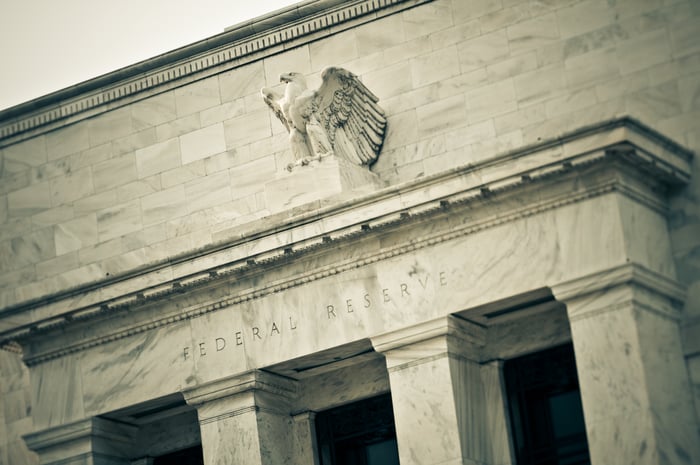 What does this mean in plain English? The government is printing money and pushing it out to the banks to spur lending activity, and to ensure they have cash to lend -- as well as to push down interest rates a bit. The Fed says this is only a "technical" move, and not a new policy to bring back quantitative easing on a permanent, or even long-term, basis (by the second quarter of 2020, tops, it says).

Nevertheless, the short-term effect will be to push down interest rates; investors may take this as a sign that the Fed will also officially cut its targeted interest rate when it meets again later this month.

Lower interest rates mean cheaper financing when a consumer signs a loan to buy a new motorcycle from Harley-Davidson (HOG 2.66%). They mean lower interest on a credit card when buying furnishings from Bed Bath & Beyond (BBBY 37.61%) to outfit a new home or apartment. They mean less interest on big purchases from luxury retailers such as Tiffany (TIF), too.

And surprise, surprise: Harley-Davidson stock popped 5.1% in early trading today. Tiffany shares were up 5.4% at one point. And Bed Bath & Beyond stock leapt as much as 7.5% in response to the Fed news.

I'd expect all three stocks to continue to drift upwards, at least until we learn whether the Fed will in fact cut interest rates this month. After that, though, it's anyone's guess -- will yet another rate cut be forthcoming, pushing shares even higher? Or will investors begin to wonder: "If the Fed thinks it has to cut rates all of a sudden, does that mean there's something wrong with the economy?"