These companies have been aggressively sold off in the last year, but do they now offer very attractive dividend yields for investors building a retirement portfolio?

Here are three industrial stocks that offer a dividend yield above 4% after slumping over the last year. As such, they should be looked at seriously by income-seeking investors with a view to locking in some attractive dividends. Let's look at industrial giants Siemens (SIEGY -0.48%) and ABB (ABB -1.43%) as well as industrial supply company MSC Industrial (MSM -0.05%) to see if their yields justify buying their stock.

Are the dividends well covered, and do they offer room for growth?

Before getting into the details of these businesses, let's check the sustainability and growth potential of their dividends. The best way to do this is usually to look at how much of free cash flow (FCF) is being used to pay dividends. For reference, FCF is what's left from operating cash flow when capital expenditures are taken out. In essence, it's what companies actually use to return capital to investors, make acquisitions, and pay down debt. 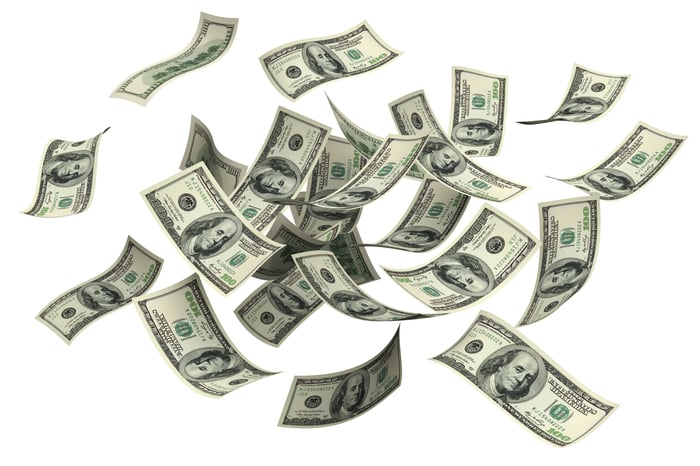 As you'll see in th echart below, there is an immediate red flag thrown up over ABB, and Siemens' dividend-to-FCF ratio doesn't suggest there's much room for significant growth. But MSC's dividend looks well covered.

In this context, let's focus on the growth outlook for them -- after all, if a company can't grow earnings and FCF, then it's highly unlikely to grow its dividend payments over the long term. 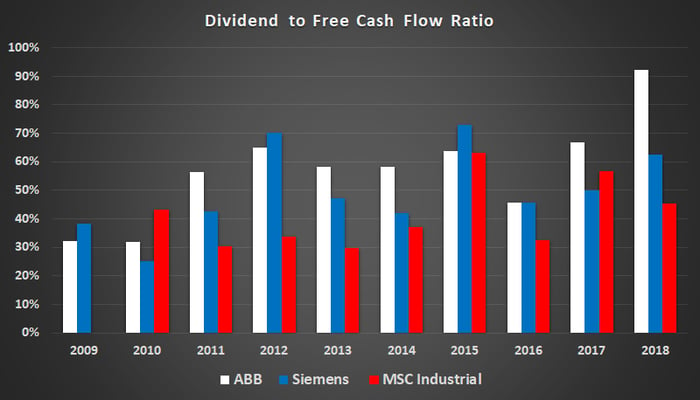 As an industrial supply company, MSC is also going to be a bellwether for the economy, and investors know that 2019 is set to be a year of slowing growth. Indeed, the latest quarterly earnings season saw companies across the sector reporting weakening conditions.

Of course, some near-term weakness shouldn't detract too much from the outlook of long-term investors, but there's another, more relevant concern over the business. It's best explained by looking at the chart below. 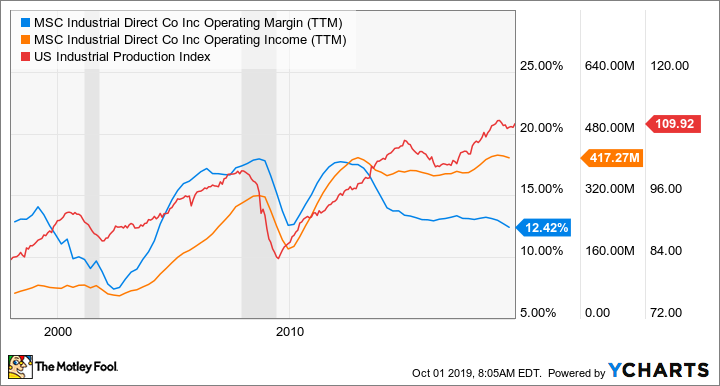 Both Fastenal and W.W. Grainger, two industrial supply peers, have posted similar results over the past several years as well. Whether the issue is the entry of Amazon.com into the industry, or overcapacity, or an inability to pass on rising supplier costs, the pattern is the same. Indeed, the margin deterioration at MSC means that, despite revenue being higher by $848 million, its operating income of $421 million in 2018 was only $9 million than that reported in 2012.

All told, long-term investors will want to see some demonstration that MSC can raise margin over time before piling into the stock.

ABB is in turnaround mode

The Swiss-Swedish company has exciting plans for the future, and the new management is committed to turning around a portfolio of attractive businesses (ABB is one of the best ways to invest in the robotics industry) that have arguably been underperforming their potential.

All of it makes ABB an interesting stock for value-oriented investors and those who like turnaround situations, but it's probably not a great stock for conservative income seekers. Its turnaround efforts are likely to be clouded by the slowdown in industrial automation spending this year. Meanwhile, the sale of its power grids business in 2020 will reduce FCF generation.

For example, ABB generated $2.9 billion in operating cash flow, with $572 million coming from the discounted business (nearly all from power grids). Given that FCF in 2018 was $2.1 billion and dividends paid were $1.7 billion, the loss of the power grids segment seems likely to pressure ABB's ability to grow its dividend in the near term.

So ABB is probably best avoided by income seekers.

The German industrial giant looks like the best option of the three -- at least for dividend investors. In common with its rival in industrial automation, ABB, and its rival in power, General Electric, Siemens faces difficult end markets in 2019. Indeed, the company's third-quarter earnings report clearly stated: "The favorable market environment for our short-cycle businesses, which was a material basis for our outlook, has significantly deteriorated in the second half of the fiscal year."

Don't be surprised if Siemens disappoints with its earnings in the coming quarter. But the company's dividend looks well covered. Moreover, it's financial strength has enabled it to recently issue 3.5 billion euros ($3.8 billion) of debt at negative yields. Bond investors are paying Siemens in order to lend it money, while equity investors are getting a 4%-plus yield.

Meanwhile, despite the cyclical headwinds, Siemens has cash flows from its remaining 85% stake in the less cyclical Siemens Healthineers, And it will spin off its gas and power segment and add its remaining 59% stake in Siemens Gamesa to the new company, in order to focus on the long-term opportunity from the digitization of industrial automation.

If you are willing to tolerate the potential for bad news in the near term, then Siemens looks like a good buy for income seekers.

Why I Bought Shares in This International Stock