Please ensure Javascript is enabled for purposes of website accessibility
Log In Help Join The Motley Fool
Free Article Join Over 1 Million Premium Members And Get More In-Depth Stock Guidance and Research
By Harsh Chauhan - Oct 15, 2019 at 6:15AM

Which of these two high-flying chipmakers deserves your investment dollars?

Chipmakers Advanced Micro Devices (AMD -4.53%) and Xilinx (XLNX) started 2019 on a bright note, but the two tech stocks' paths have diverged over the past few months.

While AMD has managed to sustain its momentum thanks to market share gains over rivals Intel and NVIDIA (NVDA -3.97%), Xilinx has lost its way in the wake of the U.S.-China trade war. But is this a good enough reason to buy AMD stock instead of Xilinx? Let's find out.

This isn't surprising as AMD looked all set to eat into NVIDIA's GPU supremacy earlier this year thanks to its move to 7-nanometer graphics cards that were supposed to be more powerful, power-efficient, and pocket-friendly.

AMD didn't disappoint as the Radeon VII -- the world's first 7nm graphics card -- that was launched in January this year, turned out to be 29% faster while gaming and 36% faster during content creation than the RX Vega 64, without any increase in power consumption. The card's competitive pricing and a strong showing against NVIDIA's flagship offering seem to have worked in AMD's favor and allowed it to gain a leg up over its archrival.

AMD is rolling out 7nm GPUs, promising beefier performance at affordable prices. On the other hand, NVIDIA's 7nm Ampere GPUs are rumored to arrive in the first half of 2020, which means that AMD will be enjoying a technology advantage for at least the next few months.

A similar story is unfolding in the CPU space, where AMD's Ryzen chips are giving Intel sleepless nights. AMD is closing in on 20% CPU market share, and it won't be long before it gets there, as powerhouse Intel seems to be facing another chip shortage.

In all, AMD's technology advantage over its rivals can pave the way for more market share gains and help the company sustain its recent turnaround.

Xilinx's high-flying run on the stock market has been tempered by the trade war as shipping restrictions for Huawei have cast a cloud of uncertainty over Xilinx's guidance. Spooked investors have scrambled to book profits, as the near-term uncertainty has been hitting the company's financial performance.

Xilinx projects fiscal second-quarter revenue growth of 10.6%. This is a tad disappointing, as the company was enjoying a terrific tailwind from the deployment of 5G networks, but Huawei's blacklisting could rob the chipmaker of a big opportunity in China.

However, it would be wrong on investors' part to miss the bigger picture here. Xilinx's reliance on Huawei is not very high, and it can make a dent in 5G markets beyond China. This was evident from the fact that the company's wired and wireless segment revenue shot up 66% in the first quarter of fiscal 2020 despite the restrictions on Huawei.

Of course, there will be a slowdown in the pace of growth of the 5G business in the coming quarters, but Xilinx has enough firepower to offset that thanks to its dominant position in the market for field-programmable gate array (FPGA) chips.

FPGAs have gained traction in the cloud and other fast-growing areas, such as automotive advanced driver-assistance systems (ADAS). Xilinx's chips are already being used by major cloud providers such as Microsoft and Amazon to accelerate data center workloads. The market for data center accelerators is booming, and Xilinx is in a prime position to take advantage.

The automotive business is also on solid ground thanks to the company's partnerships with well-known component suppliers to whom it supplies its FPGAs for deployment in ADAS solutions.

All of this indicates that Xilinx can rely on multiple catalysts to drive its long-term growth.

We can conclude that both Xilinx and AMD are going down the right path and are primed to deliver top- and bottom-line growth in the long run.

Analyst estimates compiled by Yahoo! Finance tell us that AMD's growth will go up a few notches in the coming fiscal year, with revenue expected to grow at a 20%-plus rate along with a substantial jump in earnings. Xilinx is also expected to deliver stable, double-digit growth in the current fiscal year and the next. 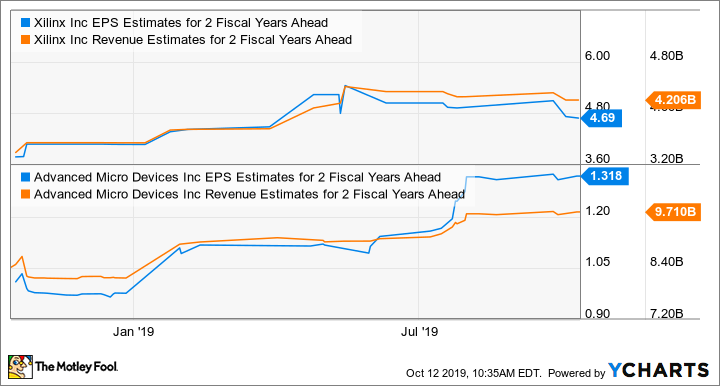 XLNX EPS Estimates for 2 Fiscal Years Ahead data by YCharts

However, investors will have to pay a rich multiple to enjoy AMD's faster growth rate. The stock has a trailing price-to-earnings (P/E) ratio of nearly 156, though the forward multiple is much more reasonable at 26.6. Xilinx's valuation is far more conservative, with a trailing P/E multiple of 24.3 and a forward earnings multiple of 21.5.

So investors with a lower appetite for risk can choose Xilinx over AMD. But if you're willing to pay a higher multiple in exchange for stronger growth potential, AMD could prove to be a good bet given the inroads it is making into the territory of its rivals.