Zoom Video Communications (NASDAQ:ZM) has been one of the hottest IPOs of 2019, and at one point, the stock was up 65%. However, since then, the stock has struggled. Now, news that Facebook (NASDAQ:FB) could be a potential rival could put a big dent in the company's growth.

Facebook announced this month that it would be offering businesses video chat, a service that could rival not only Zoom but other tech stocks like Microsoft (NASDAQ:MSFT), as well. Microsoft Teams provides companies with solutions that include group chat and video, in addition to other features. Like Teams, Facebook has a broader solution for companies called Workplace, and video chat now is a key part.

Getting into video conferencing and focusing on workplace collaboration is a reminder for Zoom and smaller companies of just how easy it can be for a tech giant like Facebook to enter a new segment of the market, especially one that's been garnering a lot of interest and could generate lots of sales. According to Global Market Insights, the market for video conferencing alone could grow to be worth $20 billion in five years. 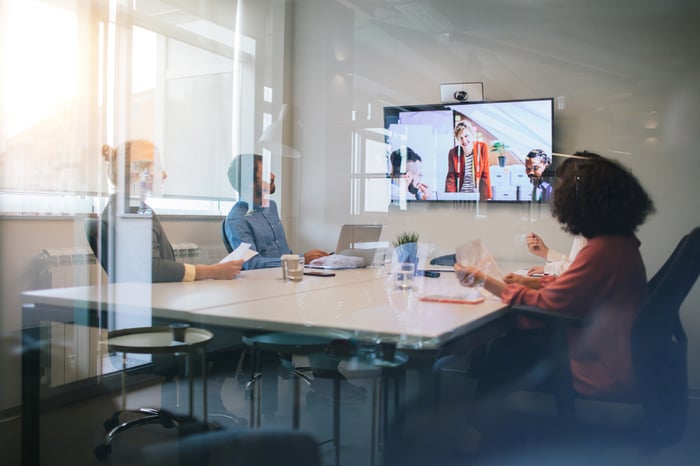 Conference calling is by no means a new phenomenon for companies. But for multinational companies, video chats can be a way to cut down on travel costs and avoid having to meet in person with employees who may be hundreds or thousands of miles away. And now, with lots of integration with Microsoft Office and other applications, it's easier than ever to make conference calling more seamless.

Is Zoom in trouble?

Since the announcement from Facebook, Zoom's shares have been falling on concerns about what it could mean for the company. Zoom is coming off an incredible quarter that saw sales almost doubling from the previous year, while profits were up over 1,000%. Its services have been a hit with customers, and the company is expecting a lot more growth to come.

While the temptation may be for investors to be concerned that this could spell doom for the company, it may not necessarily be cause for alarm. For one thing, Facebook is relatively new. Microsoft is a far bigger competitor on this stage.

If Zoom has been able to achieve significant growth with that threat, Facebook entering the space doesn't mean that Zoom is going to be in a worse position than it is today. And given Facebook's privacy and data-related scandals, many businesses may not be all that eager to put their information onto Facebook's new platform, anyway.

It's far too early to be concerned about Facebook's venture into video chat just yet. It could actually be a good sign for Zoom investors. Facebook's growing interest in the segment of the market could make Zoom a potential acquisition target of the company, especially if Facebook's product fails to be competitive in the market.

But even if that doesn't happen, Zoom doesn't appear out of place in the industry, as it has made a name for itself with some big customers, and there's no compelling reason as to why it won't be able to compete, even with Facebook in the mix.