Roku TVs will propel active accounts from 30.5 million to 72 million by 2022, according to one analyst.

Roku (ROKU 9.58%) has nearly tripled its active accounts over the last three years, and one analyst thinks it can keep close to that pace over the next three years. Macquarie analyst Tim Nollen estimates Roku will reach 72 million active accounts by 2022, up from 30.5 million it reported at the end of the second quarter.

The biggest growth opportunity for Roku, according to Nollen, is the growth of its smart TV platform. Roku already claims one out of every three smart TVs sold in the U.S., but there's a lot of room for growth in Europe and the rest of the world. Roku recently launched several new partnerships in Europe to develop and sell Roku TVs with its operating system built in.

Along with the user growth, Nollen expects Roku's platform revenue to climb to $2.3 billion in 2022. That's more than quadruple the tech company's platform revenue over the trailing 12 months and is especially telling of the growth opportunity ahead for Roku. 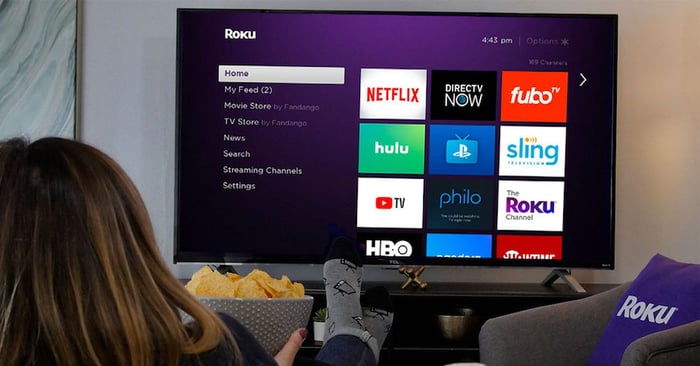 Growth is too strong to notice an ARPU impact from Europe

Nollen's estimates suggest Roku's average revenue per user, ARPU, will grow from about $21 over the trailing 12 months to more than $32 in 2022.

It's worth noting that most companies relying on advertising generate substantially more per user in North America than Europe or any other part of the world. Facebook, for example, generated more than three times the amount of revenue per user in the U.S. and Canada it did in Europe last quarter.

Facebook notably has a well-established user base in Europe too, one that's highly engaged with its products. Roku is just getting started in the region, and engagement may not be as strong in Europe as it is in its more established markets. That could lead to an even bigger gap in ARPU for European users versus American users in the short term.

Despite the headwind of harder-to-monetize users coming from Europe, Roku ought to be able to keep growing its platform revenue extremely quickly. There are a couple big reasons.

Smart TVs are more valuable than players for Roku

As more and more of Roku's user base uses its smart TVs instead of its streaming sticks or set-top boxes, Roku should be able to monetize those users at a better rate.

Additionally, Roku offers a service called More Ways to Watch on its smart TVs, which auto-recognizes the show a user is watching on linear television and shows ways the user can stream the same show from the beginning of the episode -- or even the beginning of the series -- if they're so inclined. That feature moves users from regular TV watching to streaming seamlessly.

The second way Roku TVs produce more value than players is through the amount of data Roku is able to collect on users. As mentioned, Roku is able to detect the content its smart TV users are watching, whether that's on Roku's platform or on linear television. It can even tell what ads users have seen on linear television using the same technology as More Ways to Watch. That additional data can make its streaming video ads more valuable for users on its smart TVs.

Most recently, Roku is testing showing ads during linear TV commercials. That opens the door to a much bigger revenue opportunity that's completely inaccessible through its players.

First, more and more streaming competitors are entering the market. The growing number of options for consumers should lead to greater engagement on Roku and more people cutting the cord in favor of streaming. More streaming services also means more distribution and advertising revenue opportunities for Roku.

Second, marketers are looking to shift their ad budgets from linear television to connected television and digital video. As one of the main sources for ad inventory, Roku stands to be one of the biggest beneficiaries of the shift and should see average ad prices climb over time as demand increases.

Those trends, combined with a growing user base coming from smart TVs, should propel Roku's revenue growth a lot higher. Whether platform revenue will double over the next three to four years, as Nollen predicts, remains to be seen, but all the ingredients are in place for a continuation of Roku's rapid growth.