Please ensure Javascript is enabled for purposes of website accessibility
Log In Help Join The Motley Fool
Free Article Join Over 1 Million Premium Members And Get More In-Depth Stock Guidance and Research
By Harsh Chauhan - Oct 17, 2019 at 8:16AM

For Amazon (AMZN -0.82%), India was supposed to be the next big growth driver. A population of more than a billion people and a fast-growing gross domestic product (GDP) looked like a sure-shot way of minting big money, as India's e-commerce market is still in its early stages of growth.

The Seattle-based tech giant made its first real foray into India in 2013. It spent more than $5.5 billion there in the first five years and did very well initially. Not surprisingly, rival Walmart (WMT 0.31%) followed suit by making a big play in the market last year, paying $16 billion to gain a 77% stake in local e-commerce player Flipkart. But now Amazon might be feeling nervous, as India's e-commerce growth story seems to be losing its wheels, impacting Amazon's standing in that market and its growth potential. 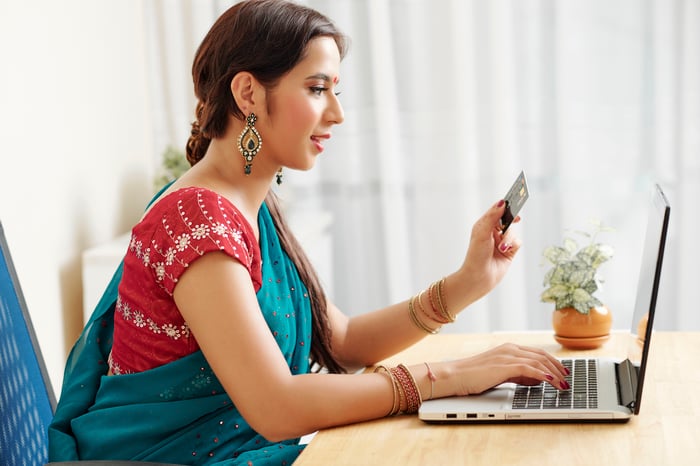 Two years ago, Morgan Stanley estimated that India's e-commerce spending could jump from $15 billion in 2016 to $200 billion in 2026. According to that estimate, India's e-commerce market had the potential to grow a whopping 1,200% in a decade, and still have more room for growth. Morgan Stanley forecast that in 2026, only 12% of India's retail spending will happen online.

So it was a no-brainer for the likes of Amazon and Walmart to make big investments in India. The problem is that the country's e-commerce climate has changed for the worse; Morgan Stanley warned about the impending slowdown earlier this year. In February, the firm said that it would take an extra year for India's e-commerce spending to hit $200 billion. The investment bank blamed the delay on the country's foreign direct investment laws, which were meant to rein in Amazon and Walmart, as well as the emergence of a hybrid online-to-offline shopping model.

Don't be surprised to see Morgan Stanley beat a retreat once again, as the spending appetite of Indian consumers seems to be dwindling.

Indian e-commerce consulting company RedSeer estimates that online retailers sold $3 billion worth of goods during the holiday-related shopping period that started on Sept. 29 and ended Oct. 4. The good news: That's a solid 30% jump from last year. The bad news: During the same period in 2018, the year-over-year increase in sales was 93%.

RedSeer had expected e-commerce retailers to sell $3.7 billion worth of goods during this sale period (comparable to Black Friday in the U.S.), while another research company -- Forrester -- had anticipated sales of $3.84 billion.

The Indian consumer has become stingy thanks to a slowdown

The stark slowdown in India's e-commerce sales isn't surprising, as overall consumer spending in the country has taken a hit. This is evident from several data points.

For instance, passenger-vehicle sales in India were down 23% year over year in September. India's automakers, car dealers, and manufacturers of auto components have reportedly laid off at least 350,000 employees since April. In July, auto parts manufacturers in India warned that a million people could lose their jobs if the slowdown continued.

Meanwhile, India's industrial output shrank 1.1% in August, on the back of weak manufacturing activity, a stark pullback from the 4.8% expansion seen a year ago. Not surprisingly, unemployment in India shot up to a three-year high in August, at 8.4%.

With people losing jobs and fearing that more cuts might be on the way, consumer spending is on the decline. That's bad news for the country's economic growth, as consumer spending accounts for nearly two-thirds of India's GDP.

Consumer confidence has been tumbling for the past two quarters, leading the country's central bank to reduce its GDP growth estimate for 2019 to 6.1%, compared to an earlier forecast of 6.9% growth.

Amazon's optimism about India seems to be waning

After investing billions of dollars into the Indian market, Amazon has started to pull back. According to a report by Indian business daily The Economic Times, the e-commerce giant has invested 2,800 crore (28 billion rupees, or roughly $392 million) in the country this year. That's less than a third of the 9,450 crore that Amazon had invested in India last year.

If Amazon doesn't boost its investment substantially in the final quarter of 2019, it would be the first time the company reduced its investment in India since it entered that market. That would be a tad surprising, as Amazon needs to hit a higher gear in India because of the competition it faces from Walmart.

Walmart's India subsidiary Flipkart dominated the recent holiday sales period hands down, commanding a 63% share of gross merchandise volume (GMV), according to RedSeer's estimates. Flipkart's GMV shot up 58% year over year, while Amazon was left with a market share between 28% and 30%, and annual growth of only 22%.

Clearly, Walmart seems to be accelerating in India, while Amazon is taking its foot off the gas. This is a red flag for Amazon CEO Jeff Bezos and company. If Amazon continues to have second thoughts about the prospects of India's e-commerce market, Walmart could run away with the race once the economy starts looking up.

John Mackey, CEO of Whole Foods Market, an Amazon subsidiary, is a member of The Motley Fool’s board of directors. Harsh Chauhan has no position in any of the stocks mentioned. The Motley Fool owns shares of and recommends Amazon. The Motley Fool has a disclosure policy.