Please ensure Javascript is enabled for purposes of website accessibility
Log In Help Join The Motley Fool
Free Article Join Over 1 Million Premium Members And Get More In-Depth Stock Guidance and Research
By Eric Volkman - Oct 18, 2019 at 11:09AM

It wasn't a good day to be in the alt-meat business, or to be an acquisitive IT giant.

During the annual Running of the Bulls in Pamplona, Spain, there are always a few casualties among the crazy and/or brave people racing the animals.

In a case of the stock market imitating life, we saw quite a bull run on Thursday, with key indexes up sharply on positive macroeconomic, global political, and company-specific news. Much has already been written about the day's winners; let's briefly explore what happened to two stocks that were trampled in the excitement. 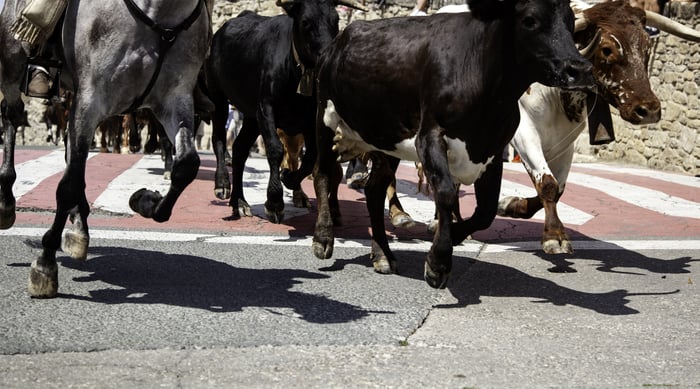 This illustrates the recent trajectory of the consumer goods stock, which rose steeply after its May IPO largely on the back of several encouraging deals with restaurants and grocery chains, plus novelty value. Beyond Meat was and remains, after all, the only pure-play alternative meat producer in the stock market.

But it's not the only player in the game -- a major reason the stock has turned generally south following that initial run-up.

Privately held Impossible Foods is making inroads almost as quickly as Beyond Meat, scoring space on the shelves of almost 30 Gelson's supermarkets in Southern California in a recently announced deal. More ominously, big food has noticed Beyond Meat's early success and is now seeking to replicate it. Hormel, among numerous others, is preparing a line of alt-meats derived from plant material.

And that intensifying competition raises a basic question: Is there really a great deal of demand for fake meat? Honestly, I can't imagine the market will ultimately be that huge.

Younger consumers want to help the environment generally, while many have gone vegetarian or vegan. But a Hormel or Tyson Foods still sells plenty of animal protein. I'm also sure we won't see a serious drop-off in McDonald's animal-derived hamburger sales anytime soon, even after Beyond Meat's recent deal for a pilot program with the restaurant chain. Americans like their genuine beef and poultry.

Don't get me wrong: I think Beyond Meat's rise to prominence is impressive. Look at the McDonald's arrangement for a recent example of management's dealmaking skills. The fake-meat producer, however, was a victim of irrational investor excitement early this year, and I don't think the hangover has ended yet.

Reporting on its Q3 of fiscal 2019 after the closing bell on Wednesday, the venerable IT company said it earned $18 billion on the top line, a nearly 4% drop from the year-ago tally. That didn't quite hit the average analyst estimate. The story was different with non-GAAP earnings, which at $2.39 billion ($2.68 per share) were down by 24%. Yet they topped prognosticator projections, if slightly.

Nobody hates an earnings beat, and few of us get upset over a minor revenue whiff.

What I think is more of a concern with IBM is the debt the company has incurred to buy Red Hat. It was a smart acquisition, bolstering Big Blue's presence in the high-potential hybrid cloud segment, but it wasn't cheap. The $34 billion price is rich (even for an old monolith like IBM), as is the approximately $20 billion in debt the company has generated to help pay for it.

Since its finances are obviously tighter now, IBM suspended its share repurchase program this summer. Investors might be worried that the company's well-liked dividend could also get a chop, although I think IBM would only cut or suspend it in a true emergency, and this doesn't qualify.

Still, that payout is a big part of the appeal of IBM stock, and shareholders can be sensitive to any perceived threat.

While I believe the Red Hat absorption has the potential to juice IBM's results, that new debt has pushed the level of borrowing awfully high. I feel the future growth prospects of IBM are a bit cloudy just now, so I probably wouldn't be a buyer of the stock.