Please ensure Javascript is enabled for purposes of website accessibility
Free Article Join Over 1 Million Premium Members And Get More In-Depth Stock Guidance and Research
By Lee Samaha - Oct 19, 2019 at 9:25AM

Let's compare the risk and reward profiles of these two aviation giants.

These two perennial aviation rivals will always be compared in terms of aircraft orders and production schedules, but which of the two is the better investment right now? Let's take a look at the risk and reward calculations that you have to make before deciding on buying stock in Boeing or Airbus.

SWOT analysis of Boeing and Airbus

The themes discussed throughout are outlined in the strength, weaknesses, opportunities, and threats (SWOT) table below. It should come as no surprise that the return to service of the Boeing 737 MAX looms large in looking at the prospects for Boeing, but other key issues differentiate the two companies -- namely operational performance (Boeing is better) and the potential for a pickup in wide-body demand in the near future (Boeing looks better placed).

For reference, Boeing is also a leading defense stock, but let's focus on commercial aviation, as that's where both companies make the majority of their profit.

It goes without saying that the risk of a failure to return the 737 MAX to service in timely fashion hangs over Boeing stock right now. CEO Dennis Muilenburg believes the return to service (RTS) will occur in October but also acknowledges that the RTS could end up being phased with, say, the U.S. Federal Aviation Administration acting before the European Aviation Safety Administration does.

All of this is highly significant, because aside from the obvious cash flow issues and reputational damage a delay would cause, a later-than-planned RTS will impact Boeing operationally. For example, Muilenburg has previously discussed the prospect that Boeing could temporarily halt 737 production if the RTS doesn't occur in due course. 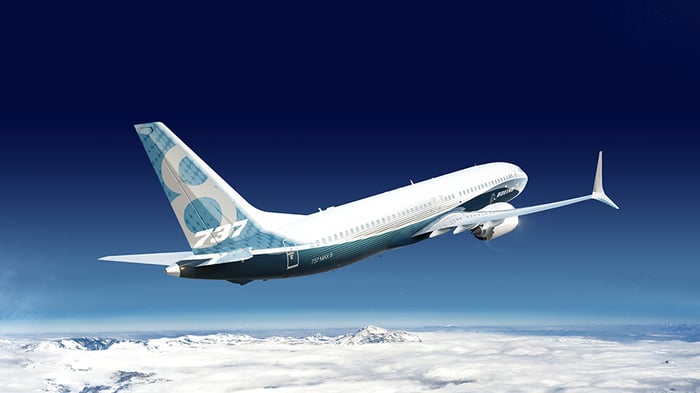 However, if the RTS occurs in October, Boeing plans to boost 737 production to 57 a month next year from 42 a month at present. Such a level of uncertainty is surely putting suppliers in a difficult planning position, and given that production ramp-ups are a key part of Boeing's plans to increase margin, it's potentially an issue. Moreover, a decision on launching the New Midsize Airplane (NMA) is likely to be delayed until the 737 MAX RTS.

Turning to Airbus, it's fair to say that Airbus's challenges in stepping up the A320 family production mean it's not ideally placed to take advantage of the 737 MAX grounding. But let's put it this way: Most people wouldn't mind being an Airbus salesman when your only major narrow-body rival, a fierce competitor on price, isn't in service.

In addition, Boeing can't simply respond by trying to increase 737NG (the version of the 737 preceding the MAX) sales and production, because realistically, it can't compete with newer and more advanced Airbus A320 NEO.

The operational difficulties for Airbus feed through into metrics like profit margin and free cash flow (FCF) generation. As you can see in the chart below, Boeing's FCF margin is consistently higher than Airbus's. To put this into context, Boeing's FCF has been, on average, 5 times that of Airbus over the last five years. However, Boeing's current market cap is only around double its rival's.

In addition, Boeing has aggressive plans to improve operating margin at Boeing Commercial Airplanes (BCA) and in its fast-growing Boeing Global Services (BGS) segment too. Boeing's five-year outlook is favorable provided the 737 MAX gets back into service.

Data source: Company presentations. Airbus FCF is converted to U.S. dollars at the current rate of 1 euro to $1.105.

Furthermore, if Muilenburg is right about a pickup in wide-body demand starting next year, then the company's 787 and new 777X airplanes look better set to compete. The chart below shows how Airbus has historically had the edge on orders in the narrow-body market, but Boeing is the clear leader in the wide-body market. 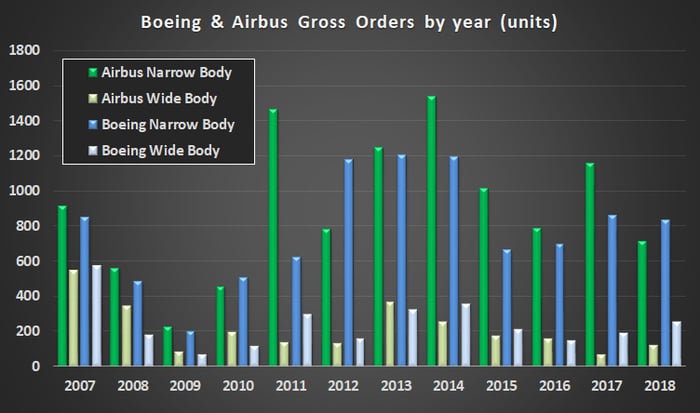 Frankly, both companies and stocks are attractive for long-term investors. But if you sit down right now and force yourself to buy one stock or the other, Airbus is going to suit the risk-averse investor, while more aggressive investors will favor Boeing.

However, you could always defer a decision until Boeing gets the 737 MAX back into service and risk dissipates. With the 737 MAX back in the air in a timely fashion, based on current prices, Boeing's history of better execution makes it look like a better value.