Major benchmarks wobbled between gains and losses on Wednesday as investors reacted to earnings reports that gave a mixed picture of the economy. The Dow Jones Industrial Average (^DJI 0.00%) and the S&P 500 (^GSPC -0.16%) closed in the green, with the energy sector in the lead and consumer discretionary lagging behind.

As for individual stocks, Chipotle Mexican Grill (CMG 1.04%) fell after beating expectations, but Caterpillar (CAT 0.95%) rose despite missing them. 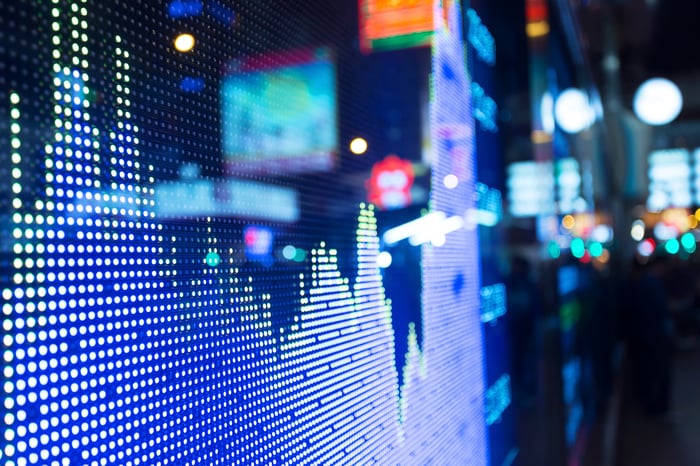 Comparable-restaurant sales grew 11%, with 7.5% growth in transactions and a 3.5% increase in the average check, partly because of price increases in 2018. The company added a net 24 restaurants in the quarter to bring the total to 2,546, 3.4% above the number a year ago. Restaurant-level operating margin improved 2.1 percentage points to 20.8%.

Chipotle raised guidance for full-year comparable-sales gains to "the top end of our prior high single digit" growth, which may have been a minor disappointment in an otherwise stellar report, since Q2 growth was 10% and Q1 was up 9.9%. The successful carne asada offering is ending around the beginning of December, right when the company will have a tough comparison with last year.

Chipotle shareholders aren't exactly crying in their guacamole, though. The restaurant stock is the best performer in the S&P 500 year to date.

Caterpillar reported declining sales and profit and lowered its outlook for the year, but investors were braced for bad news and bid the shares up 1.2%. Revenue declined 6% to $13.5 billion and earnings per share dropped 8% to $2.66. Those results fell short of the published estimates of analysts following the company, which were for EPS of $2.88 on revenue of $13.6 billion.

The heavy-equipment maker said that dealers reduced inventories by $400 million in the quarter, bracing for lower sales due to uncertainty about the global economy. In the period a year ago, dealer inventories had grown by $800 million. Sales decreased across all three product segments, but Caterpillar maintained its operating profit margin of 15.8% despite the drop in volume.

Caterpillar expects further inventory reductions at dealers and slashed its EPS guidance for the full year to $10.90-$11.40, down from $12.06-$13.06. The company said that the lower inventories and improved lead times will help it respond quickly to changing conditions next year.