Stocks of drug developers, particularly small ones, can skyrocket or crater based on late-stage clinical trials. Before year-end, ChemoCentryx may do one or the other.

ChemoCentryx (CCXI 4.56%) develops drugs for orphan diseases, meaning those with fewer than 200,000 patients in the U.S. Currently, ChemoCentryx has four drug candidates in development with the most advanced being avacopan. This quarter, ChemoCentryx will announce pivotal trial results with avacopan in a make-or-break binary event for investors. 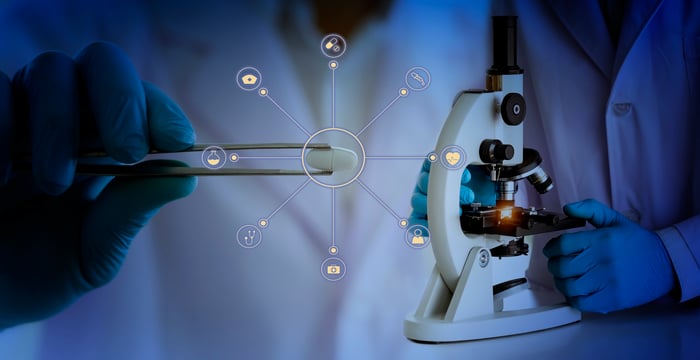 Avacopan's pivotal phase 3 clinical trial seeks to help patients with anti-neutrophil cytoplasmic autoantibody (ANCA) vasculitis. Simply put, the patient's immune system activates a specific type of white blood cells, called neutrophils, that then attack the small blood vessels, causing inflammation and swelling. The irreversible damage can lead to kidney failure. According to ChemoCentryx, ANCA vasculitis afflicts between 40,000 to 75,000 patients in the U.S. and 50,000 to 100,000 patients in Europe.

Today, ANCA vasculitis patients typically receive high-dose steroids with an immunosuppressant, either cyclophosphamide or Rituxan from Roche Holding. This approach has been around for nearly 50 years.

But steroids, especially when given chronically, can be toxic, and suppressing the immune system can lead to infections. A study published in the Annals of Rheumatic Diseases by Little et al. evaluated data on 524 ANCA vasculitis patients in Europe found 11% of them died within one year, and 59% of those deaths were a result of therapy.

According to ChemoCentryx, the complement system, one of the components of the immune system, consists of a group of proteins responsible for regulating the defense against bacteria and viruses, triggering inflammation, and removing debris from cells and tissues. Dysregulation of the complement system can cause the body to launch an attack on healthy cells resulting in autoimmune diseases like ANCA vasculitis.

Avacopan works by specifically inhibiting the C5a receptor. This then prevents the activation of neutrophils, the white blood cells that carry out the attack on the blood vessels in ANCA vasculitis. ChemoCentryx believes the specificity for that receptor benefits patients while leaving the rest of the immune system intact.

Targeting the complement system to fight autoimmune diseases recently emerged as a hotbed for biotechs, including Apellis Pharmaceuticals (APLS 1.57%), Omeros (OMER 12.40%), and Ra Pharmaceuticals (RARX). Earlier this month, Ra announced it was being acquired by Belgian pharma UCB for $2.5 billion, representing a 90% premium to the company's stock price.

The phase 3 trial, scheduled to have results this quarter, aims to achieve two primary endpoints: to determine if the patient achieves remission after 26 weeks of treatment and then if the patient has maintained the remission after 52 weeks. Historically, patients receiving standard-of-care treatment frequently relapse over time. But some analysts caution that 52 weeks may not be long enough to capture the timing of relapses in a real-world setting.

The phase 3 trial is not the typical trial designed to show superiority of one drug over another. Instead, the aim is "non-inferiority" to the standard of care. The company claims that a superiority-based trial requires too many patients to be practical for this rare disease. Instead, it seeks to show comparable efficacy while hopefully demonstrating other benefits such as fewer or less severe side effects and ease of administration with a pill compared to an injection.

Payers, including insurance companies, may push back or limit reimbursement due to the non-inferiority design and the argument over whether the endpoint at 52 weeks is too early to see meaningful differences in relapse rates. The alternative treatments will arguably be cheaper, as they are generic and well established. Assuming the trial is positive, ChemoCentryx will need to build an economic argument showing the financial benefit if avacopan delays or prevents relapses, reduces or eliminates the need for steroids, causes fewer side effects including hospitalizations, and improves patients' quality of life.

Chemocentryx has a market cap of roughly $450 million. The stock price rebounded nearly 20% over the past few weeks after hitting lows near the end of September. But year to date, the stock is still down about 30%. The company claims avacopan's potential revenue can exceed $1 billion depending on pricing and the number of indications it is ultimately approved to treat. Biotech and pharma stocks trade at a price-to-sales ratio between four to six, according to a 2019 New York University analysis of more than 700 companies. If that is true, then the stock could be worth several multiples and be a good value at these prices.

Investors can take comfort in the fact that they are owners alongside stalwart investment managers Fidelity and BlackRock as well as healthcare specialist Cormorant Asset Management. Vifor Pharma, a European company specializing in kidney diseases, owns 18.5% as of the proxy statement filed in April 2019. It initially acquired over 6.6% of the stock as part of licensing deals for the rights to avacopan and CCX-140 outside of the U.S. and China. At the end of 2018, Vifor purchased an additional 15% of ChemoCentryx's stock that was owned by GlaxoSmithKline from a partnering arrangement dating back to 2006.

The chances of avacopan successfully meeting the non-inferiority endpoint is probably high. The key metric that investors will need to evaluate is the safety profile. If that looks reasonable or superior to the standard of care, then one can envision doctors and patients wanting to use the drug. And the drug and ChemoCentryx's value should be significantly greater than it is today.