Despite positive results, shares of industrial conglomerate Textron fell more than 7%. Is the market overreacting?

Aerospace and transportation manufacturer Textron ( TXT -0.17% ) announced quarterly earnings on Oct. 17. Adjusted net earnings rose 56% over the prior year, and operating margins expanded by 140 basis points to 9.1%, while revenue increased 2% year-over-year. However, the company reduced its full-year profit and cash flow guidance, and shares dipped more than 7% in the aftermath.

Before digging into valuation, it's imperative to run some checks on financial health and operational efficiency to uncover potential red flags that might derail any bull narrative.

Textron certainly carries debt, with a 0.68 long-term debt-to-equity ratio, but debt-heavy capital structures are fairly common among large aerospace and industrial manufacturers. While Textron is somewhat higher than the peer group average in this regard, it still falls well within the peer group range. Sufficiently high interest coverage and current ratios help allay any fears of imminent bankruptcy or default risk. 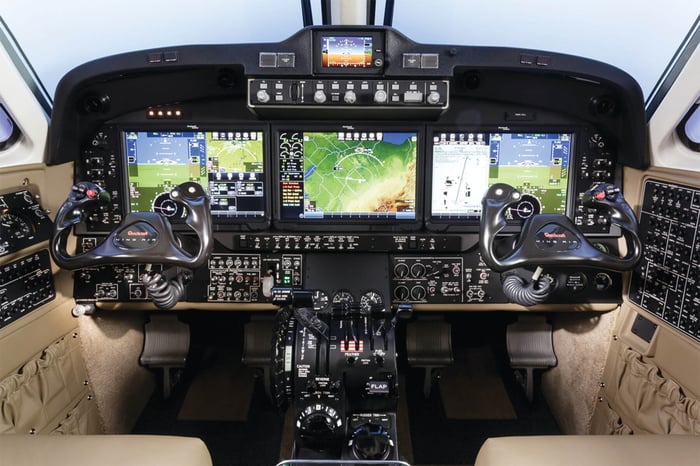 Textron also passes the test for operational efficiency. The company's Return on invested capital (ROIC) of 14.23 is nearly identical to its comparable average and is among the highest the company has delivered in recent years. The improvement indicates that company management is using the available capital efficiently to generate returns. Operating margin has remained fairly stable since 2014, though the company's net profit margins are narrower than elsewhere in the aerospace and industrials sectors. Cash flow and working capital management have been similarly stable. Textron's management appears to slightly exceed its peers in this element of stewardship.

There's no apparent reason to disqualify Textron based on financial health or operating efficiency. If shares are indeed dipping into attractive valuations, this could be a great entry point.

Textron's 12.7 price-to-earnings ratio might look exciting at first glance, but this figure is ultimately misleading upon a deeper valuation dive. Some of the company's other valuation metrics are indeed appealing. Its 8.41 EV/EBITDA ratio falls well below the aerospace industry average and moderately below the industrials sector as a whole. The price-to-book ratio of 1.95 also compares favorably to the peer group average, which is above 3.

However, Textron's valuation is less enticing upon closer inspection. The company's top line has grown 1.3% on average since 2015 while operating income has actually declined, so this is hardly a compelling growth story. The 1.43 PEG ratio is still slightly lower than the aerospace industry average of 2.2, but adjusting for growth certainly makes the head-turning P/E ratio less appealing. Its 39.2 price-to-free cash flow ratio is high compared to peers, so it does not appear to be converting profits into cash flows in a similar proportion to its peers.

Textron's low dividend yield, which is only 0.17%, is probably the biggest obstacle to a bullish feeling about the stock. Other defense stocks with aviation operations including Lockheed Martin ( LMT 0.56% ) and United Technologies ( RTX 1.75% ), pay yields above 2% and have government contracts to insulate them from cyclicality. Numerous other stocks in the industrials sector provide similar macroeconomic exposure but deliver superior dividend returns.

Textron has undoubtedly fallen to a more attractive entry point, and the company's operational history and outlook are generally positive. However, at this point in the business cycle, shares would need to come in slightly better to set this stock apart from the alternatives.