Grubhub (NYSE:GRUB) suffered a big third-quarter earnings miss in late October, and shares lost over 40% after the release of the disappointing results. The company's fourth-quarter guidance was also below expectations.

Analysts downgraded Grubhub stock after the earnings report, citing uncertainty over the company's new strategic plan, increasing competition, and decreasing margins. Furthermore, the company is facing scrutiny from regulators in one of its biggest markets regarding its business practices. Some of these practices are potentially leading to distrust between restaurant owners and the company. 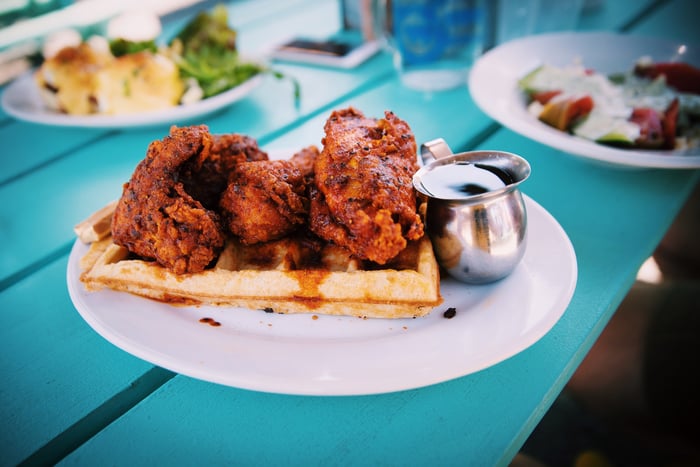 As growth decelerates, competition and commoditization are becoming a problem

Third-quarter adjusted earnings per share was $0.27, in line with analyst expectations, but revenue of $322.1 million was below analyst estimates of approximately $330 million. Looking ahead, management's fourth quarter outlook is for revenue between $315 million and $335 million, again coming in below consensus estimates.

Over the last several quarters, Grubhub has seen a significant slowdown in key metrics: revenue, average diners, gross food sales, and daily average grubs (meals). For example, the daily average grubs growth rate was 10% in this latest quarter, down from 37% in the year-ago period.

The food-delivery company blamed heavy competition, online delivery returning to "a more normal longer-term" growth state, and a lack a consumer loyalty. The number of competitors in the online food delivery space has increased with consumers able to pick and choose among Postmates, Uber Eats, goPuff, Munchery, and more. Grubhub even lost its market share leader position to Doordash, with the former claiming 30% to the latter's 34%. The company told investors that it believes growth in the industry will fall in the low double digits going forward, but this growth is now "split between multiple players." In the past, Grubhub's data showed that diners were very loyal to its platform. That has also changed, with existing diners frequently ordering on multiple platforms.

In June 2019, Amazon closed down its online restaurant delivery service, Amazon Restaurants. Did the e-commerce giant see a lack of long-term growth potential in the online food delivery business?

Grubhub is now grappling with accusations the company set up fake phone numbers and websites in order to collect greater commissions. The orders that come through the phone numbers set up by Grubhub -- not the restaurant's actual contact information -- earn the platform a 3% to 15% commission, whereas direct calls to the restaurants do not earn Grubhub any commissions.

There's also a multimillion-dollar lawsuit against Grubhub filed in Philadelphia accusing the company of charging fees to restaurants for orders that never happened. While the food delivery platform has denied these allegations, the ongoing controversy can't be good for building trust and relationships with restaurants that drive its platform.

Regulators are looking to protect businesses by capping Grubhub's fees

To make matters worse, New York regulators have accused Grubhub of potentially breaking the law by charging restaurants high fees for delivery services that are based on a percentage of the total order value. State regulators say that Grubhub's fees are detrimental to small business owners, and the New York State Liquor Authority has proposed a 10% commission cap for food deliveries or generation of food orders through platforms like Grubhub and Uber Eats.

Grubhub, which owns Seamless, is New York's biggest food ordering platform. Currently, the company can charge fees as high as 30% on food orders, but if a 10% cap goes into effect, Grubhub's results will take another major hit. While the company claims that users who order through its app are often converted into dine-in customers for the restaurants, the chair of New York City's Council on Small Business argues "many restaurant owners have said that delivery services' orders are cannibalizing their existing customer base."

Given the challenges Grubhub is facing from competitors and regulators, and how quickly those headwinds are materializing in the company's financial results, investors interested in the restaurant industry should think twice before buying this battered stock. The entire food delivery space is adjusting to new market conditions, and competition is intensifying even as growth slows. Grubhub will need to reverse its downward trend in the new year before I'm convinced this stock has hit bottom.