The stock took a dive after the company posted a decline in profits in the last quarter.

However, net income decreased by 25.6% year over year to $14.8 million for the quarter. But earnings per share of $0.12 was still in line with analysts' estimates. 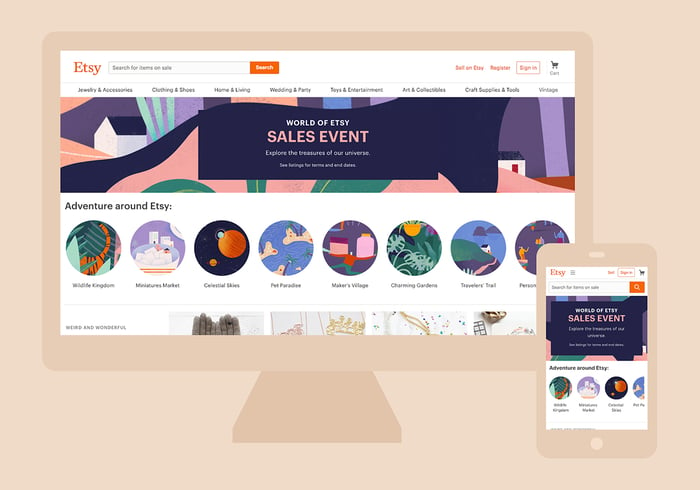 Despite the profit drop in the third quarter, Etsy's business is performing well overall. Revenue grew 31.6% year over year, and the adjusted EBITDA (earnings before interest, taxes, depreciation, and amortization) margin was stable at 22%.

During the company's conference call to discuss the results, CEO Josh Silverman said, "It's extremely rare to see a company in our sector with such strong sustained revenue growth while simultaneously delivering some solid profitability."

It's difficult to pinpoint specifically what market participants didn't like about the quarter. It's likely that valuation concerns could have been to blame.

Etsy is certainly valued for growth, as the stock was trading for a trailing price-to-earnings ratio higher than 70 times earnings before the earnings news. That's a little steep for a company that just reported a steep drop in net income.

It might take investors a while to come back around, but Etsy's forward guidance points to continued momentum in the business. For the full year, revenue is expected to be up 34% to 35% year over year, with adjusted EBITDA between 22% to 23%.

On the call, management discussed several growth initiatives under way, including investing in search and marketing tools for sellers. These costs are partly to blame for the decline in profitability last quarter.

The company also acquired Reverb, an online marketplace for used music instruments and equipment. That's been unprofitable this year and weighed on Etsy's net income in the recent quarter.

Silverman suggested that the addition of Reverb enhances the company's growth prospects:

There is a lot of excitement with Reverb. We're already sharing best practices across the business, specifically in product development and marketing. I firmly believe we have the tools in place to continue to execute our long-term growth strategy, driving further value for our stakeholders.