Please ensure Javascript is enabled for purposes of website accessibility
Free Article Join Over 1 Million Premium Members And Get More In-Depth Stock Guidance and Research
By Rich Duprey - Nov 11, 2019 at 9:50AM

Industrial production may be slowing, but these three companies should be able to rise above the tumult.

While it might seem like the TV talking heads have been trying to jawbone the country into a recession for years despite many economic indicators pointing higher, there are some worrisome trends.

Particularly across the industrial and manufacturing landscape, there are signs of a slowdown, so taking a look at this sector may provide investors with some early warning signs. Axon Enterprise ( AXON 3.76% ), Columbus McKinnon ( CMCO 1.96% ), and Cummins ( CMI 0.23% ) are three stocks to watch this month to gain valuable insights into the market. 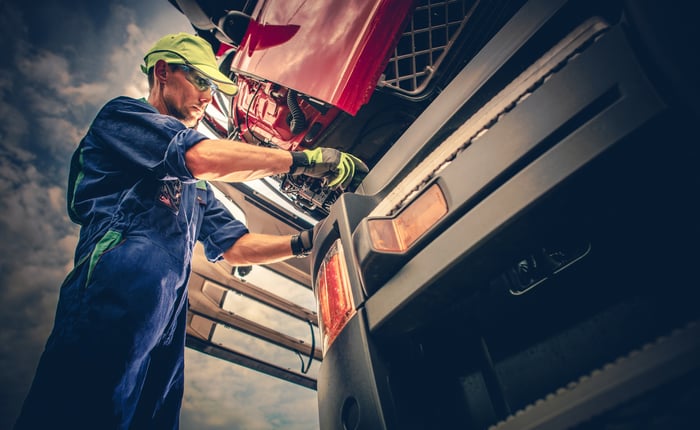 Axon Enterprise has put in motion a plan to accelerate sales and earnings for years to come by bundling together all of its offerings in one package that provide it with multiple revenue streams.

While each component gives Axon a unique opportunity to generate sales on its own, the bundle channels customers to its potentially most profitable, "stickiest" services that will keep them in its ecosystem.

Called the Officer Safety Plan, Axon launched the program earlier this year giving law enforcement agencies access to its latest Taser 7 stun gun, Axon 3 body camera, unlimited cloud-based storage in Axon Records, and its Evidence.com evidence database management system. The Taser comes with a rechargeable battery pack that automatically uploads the weapon's use to Axon's subscription-based records management system in the cloud for later review. The body cams provide live-streaming and documentation that can be stored in the evidence-tracking system for easy retrieval, also a recurring-revenue-based service.

After an earnings miss last quarter that ultimately amounted to a timing issue, Axon came back strong this quarter beating expectations on the top and bottom line, and it only looks like it gets better from here.

One of the economic conditions that have some analysts worried about the economy is the slowdown in industrial markets. Columbus McKinnon, the country's largest manufacturer of hoists, cranes, actuators, and other rigging tools, notes that global industrial production has weakened with industrial capacity utilization declining, and the ISM manufacturing index for the U.S. contracting for six straight months.

That's not an easy market to execute a turnaround in, but Columbus McKinnon is proving it's possible, reporting a 2% increase in revenue and an 8% increase in adjusted net income as it both reduced costs and invested in new technology. That includes a new workstation crane that automatically travels to a pre-programmed location, allowing the crane operator to perform other crucial tasks without having to guide the crane.

Columbus McKinnon just raised its outlook for fiscal 2020, believing its turnaround blueprint will now contribute $18 million in operating income versus its previous expectation of $12 million. It's still forecasting revenue will be down 2% for the year, but it will be in a more financially secure position as it moves into new potential growth markets, such as petrochemicals and liquid natural gas. With analysts forecasting the hoist and crane maker to grow earnings 20% annually for the next three to five years, it's one industrial company to watch now.

Cummins is another industrial name whose business often rides the waves of expansion and contraction in industrial markets. And sales in its engine division suffered from lower truck production in North America, but also because of a big drop in China, which sent international revenue 25% lower.

Yet it's generally been the case that its U.S. business is stronger than its operations in the rest of the world, and though that hasn't always been enough to sustain it, its third-quarter results helped push its stock higher as pickup truck demand grew and retail sales were strong. Cummins shares are now 33% above the level they fell to last quarter.

The company also expects its revenue to be down 2% for the year, lower than its previous guidance of flat year over year, and it does anticipate most global markets to slow down in the quarters ahead. It believes the weakness is more broad-based than what was expected, and there are only pockets of growth.

Yet Cummins has also prepared for this eventuality and is ready to reduce its costs commensurately. That means it will still be able to deliver healthy profits and record operating cash flow, while returning cash to shareholders. It's returned a record $910 million this year. The engine maker could be one to ride out any storms that strike the economy.

Axon's Next Phase: Tasers for Everyone?

This Growth Stock Is Just Getting Started