Chesapeake Energy (OTC:CHKA.Q) is having an abysmal month. Shares of the energy company have tumbled a gut-wrenching 43% over the past few weeks after it reported its third-quarter results. Not only did those numbers come in a bit below expectations, but the company also raised doubts about whether it can continue as a going concern. In a worst-case scenario, it could file for bankruptcy to address its mountain of debt.

However, while shares of the oil and gas driller have tumbled, insiders have been buying. Those purchases likely have investors wondering if they should join them in scooping up shares of the beaten-down company. 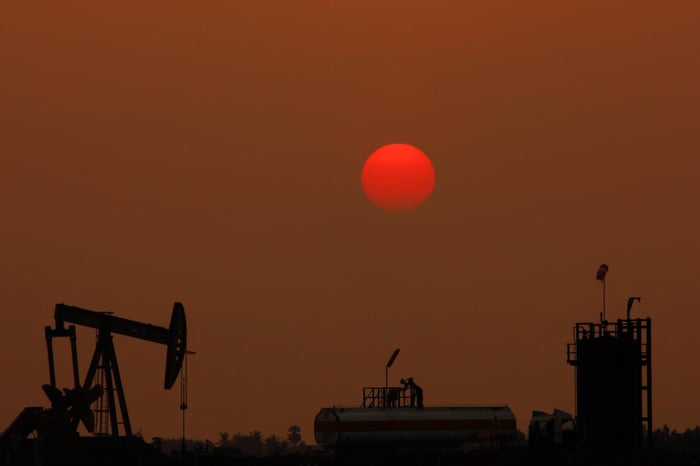 The $9.7 billion elephant in the room

Chesapeake Energy ended the third quarter with $9.7 billion of debt outstanding. That's above the $8.2 billion in debt it had to start the year. Driving the increase was its nearly $4 billion acquisition of WildHorse Resource Development -- which included some cash as well as the assumption of debt -- and the company's continued practice of outspending cash flow to drill new wells.

That's an enormous amount of debt for a company that currently has an enterprise value of $12.8 billion. The biggest concern in the near term, however, is that it has $301 million of debt maturing next year that it needs to find some way to pay off or refinance. Meanwhile, it has another $294 million in notes that will come due in 2021 as well as the $900 million it borrowed against a credit facility tied to the WildHorse assets. That's a significant amount of money Chesapeake needs to pay back over the next two years, which will be tough to do given the persistent weakness of oil and gas prices. If the company can't address these maturities in time, it might have no choice but to declare bankruptcy. If that happens, existing investors will likely end up with nothing.

Despite the real possibility of the stock becoming worthless, Chesapeake's chairman, Brad Martin, as well as CEO Doug Lawler, recently bought more shares of the driller. Martin bought about 250,000 more shares, boosting his position to 1.22 million. Lawler, meanwhile, purchased another 50,000 and now owns 5.13 million shares, good for a 0.3% stake in the company.

Insiders will often make open market purchases like that to make a statement, which in this case is likely that the company's recent sell-off was an overreaction. There are several reasons why they might hold this view. For starters, debt did improve from the second quarter's level of $10.2 billion. That's after the company completed an exchange transaction that eliminated $773 million in debt and preferred stock obligations by swapping some of its common stock. While that deal diluted its existing investors, it will reduce future interest expenses as well as the total amount it owes.

Meanwhile, its balance sheet should improve further next year. In response to the weakening in oil and gas prices over the past few months, Chesapeake cut its 2020 spending plan by around 30% to between $1.3 billion and $1.6 billion. That should enable the company to generate some free cash flow next year, which it can use to pay off more debt.

The company noted in its third-quarter earnings release that it believes that these two moves "will reduce its debt levels and improve the ratios under the covenants in the company's revolving credit facility." That should allow it to remain a going concern, especially if oil and gas prices stabilize.

It's hard to see a happy outcome

One of two things will likely happen to Chesapeake Energy: It will go bankrupt or find a way to survive. However, even if it manages to address enough debt to stay afloat, that doesn't mean its stock will soar, since it might need to issue a boatload of new shares to creditors to complete more exchanges, which could weigh on the price. That's why I'd caution investors against buying Chesapeake's stock, especially when there are better options out there that offer lots of low-risk upside.