In October 2016, AT&T (NYSE:T) announced the acquisition of Time Warner. It's been more than three years since the initial announcement, but after a Department of Justice lawsuit delayed closing by over a year, AT&T is finally in control, executing, and making a good strategic case for the merger.

AT&T reported earnings on Oct. 28 and unveiled HBO Max the following day. Let's review these events and assess what the future looks like for this telecom and media stock.

AT&T is executing on virtually every metric

The primary concern following the $85 billion acquisition of Time Warner was AT&T's debt load. At the closing of the acquisition, AT&T's debt stood at $180 billion and the company was the largest non-financial corporate borrower in history. Management promised to reduce this debt burden by year-end 2019. The goal it set was a reduction in net debt to EBITDA (Earnings Before Interest, Taxes, Depreciation and Amortization-a common measure of cash flow) to 2.5x from 2.9x at the closing of the acquisition. 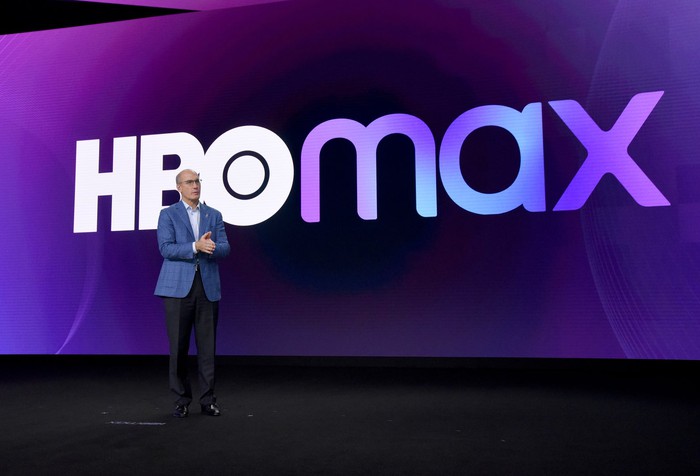 At the end of September, net debt was reduced by $21 billion to $159 billion, and net debt to EBITDA was reduced to 2.66x. Management continues to guide this debt metric to be at or below 2.5x by the end of the year. Adding to management's confidence in achieving its deleveraging goal is that share repurchases will resume before year-end. In fact, by the end of 2020, AT&T plans to have retired all the debt it raised in acquiring Time Warner and approximately 70% of the shares it issued.

In addition, wireless service revenue, AT&T's largest operating segment representing about 40% of revenues, returned to growth. Broadband profits stabilized and WarnerMedia's profits are up. Those three businesses account for 85% of AT&T's profits. Further, synergies are on track, earnings guidance was reaffirmed, and free cash flow guidance was raised by $2 billion to $28 billion for 2019.

Another significant investor concern is subscriber losses. AT&T believes subscriber losses have peaked as the majority of its subscriber base with deep discounts have been cleaned up. Part of the rationale of the Time Warner acquisition was to create a stickier subscriber. Hopefully, with the roll-out of HBO Max, progress will be seen in 2020. Importantly, for every one basis point reduction in churn, revenues increase by $100 million.

HBO Max will take time to become a star

AT&T is focused on capitalizing on two key consumer trends: demand for premium content and demand for connectivity anywhere. Today, HBO has around 34 million subscribers who pay $14.99 per month.

HBO Max, expected to launch in May 2020 for the same price, is expected to capture 50 million subscribers by 2025. AT&T will spend an additional $4 billion on new content over the first three years and HBO Max is not expected to turn profitable until 2024 at the earliest.

HBO Max will combine all of AT&T's content in one place, including HBO, TBS, TNT, the CW, Cartoon Network, Adult Swim, CNN, and more. The combined content, along with new content in development, is expected to appeal to the entire spectrum of audience demographics.

AT&T has some of the best TV and theatrical production capabilities in the industry and more than a century's worth of existing content. Any concerns about the continued productivity of these assets, given the new ownership, should be put to rest with WarnerMedia, again leading the industry in 2019 with 39 Primetime Emmy Awards and 15 News and Documentary Emmy Awards.

For the first time, AT&T provided guidance for the next three years. It expects revenues to grow in the low-single digits and earnings per share to compound at a 9.2% growth rate at the mid-point of its guidance range.

Free cash flow, defined as cash flow after capital expenditures, should reach $30 to $32 billion by 2022. Dividends should consume less than half of that amount leaving plenty of cash left over for further deleveraging, share repurchases, or additional acquisitions, although no major acquisitions are planned over the next three years.

AT&T's valuation is compelling. With earnings growth of 9% coupled with a dividend yield of over 5%, investors should see north of a 14% compounded return over the next few years. AT&T currently trades for less than 11x next years' earnings. Applying a more reasonable 14x earnings multiple would yield a stock price in the low $50s, implying total returns of over 30%. This wireless carrier is about to take flight, and investors should climb aboard now.