As the weather gets colder, people think more about fuel: Natural gas to heat the house, electricity for the portable heater, and gas to refill the car you left running while defrosting the windshield.

This November, investors may want to think about fuel, too, specifically in the form of energy stocks. The best energy stocks can provide significant sources of income while also giving ballast to your portfolio.

Three energy stocks that are top choices this month are Plains All American Pipeline (NASDAQ:PAA), Brookfield Renewable Partners (NYSE:BEP), and Royal Dutch Shell (NYSE:RDS.A)(NYSE:RDS.B). Here's why you might consider buying in. 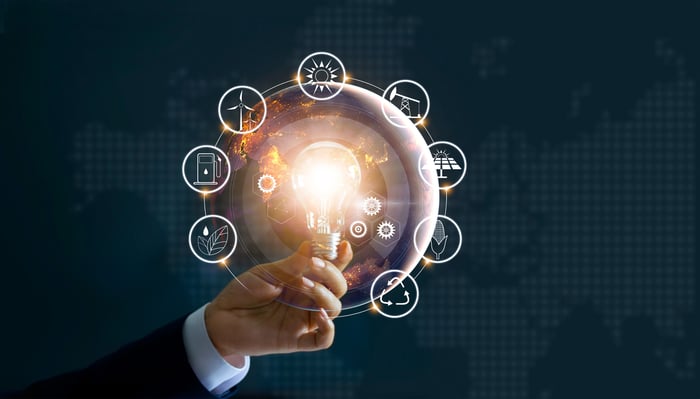 Over the past year, net income at pipeline master limited partnership (MLP) Plains All American Pipeline has soared 34.6%. Meanwhile, its per unit price (the equivalent of a share in MLP speak) has fallen 20.2%. That kind of discrepancy should make investors' ears perk up. And indeed, the reasoning for the drop looks a bit thin.

Plains was making a lot of money in the red-hot Permian Basin thanks to a transportation bottleneck. Because a lot of that Permian crude had nowhere to go, Plains could charge a premium to ship it to the Gulf Coast, and lock up a tidy profit on the way. But in August, Plains began shipping Permian oil to the Gulf Coast on its massive new Cactus II pipeline. That's already begun to ease the bottleneck. With other major Permian pipelines in the works, investors -- expecting declines in shipping fees -- have headed for the exits despite Plains' slate of additional projects.

But it's not just the partnership's price that has fallen; its valuation is looking very attractive, too. The company's enterprise-value-to-EBITDA ratio -- a good metric to use for a pipeline company because it strips out depreciation -- currently sits at just 5.4, the lowest it's been in 10 years. Similarly, its distribution yield -- which can serve as a proxy for valuation -- is currently 7.8%, the highest it's been in nearly two years. No worries, either, that this dividend level isn't sustainable: Plains has robust dividend coverage of more than 2.0 times.

Even if growth slows, Plains still looks like a good deal at its current price.

Unlike Plains All America, renewable energy MLP Brookfield Renewable Partners has seen its unit price steadily rise so far this year: up 72.8% to date in 2019! With all that growth, you might worry that Brookfield -- which makes its money selling electricity from the hydroelectric, wind, and solar assets that it owns -- has already appreciated too much to buy.

It's a valid concern, but the company's enterprise-value-to-EBITDA ratio is just 13.4 -- near the low end of its five-year range. With its huge price spike, the distribution yield has suffered, though, and is now just 4.6%. That wouldn't be so bad in the world of stocks, but in the world of MLPs, where companies are required to pay out most of their cash flow as distributions, it's not particularly appealing.

What is appealing is the company's ability to generate cash. In Brookfield's most recent quarter (Q3 2019), funds from operations -- basically, MLP-speak for operating cash flow -- grew by 26.7% over the prior year as the partnership derived more money per megawatt from its operations. A spate of new projects should keep the good times rolling at Brookfield for years to come.

I know, I know: Oil major Royal Dutch Shell seems to show up a lot on the lists I write. But I'm not alone, and that's because Shell has been a consistent outperformer among big oil companies.

An uncharacteristically poor earnings report caused a big Shell sell-off in August, as low oil prices and industry headwinds finally caught up with Shell; the other oil majors haven't fared much better. However, this price drop could be a buying opportunity for investors. One lousy quarter doesn't make a trend, and Shell's stellar recent track record offers hope that its troubles will be short-lived.

Fuel for your portfolio

Like a nice hot cup of coffee in the wintertime, outperforming energy stocks can help your portfolio heat up. Plains All American Pipeline, Brookfield Renewable Partners, and Royal Dutch Shell are all good candidates for investors to consider this month.