Shares of Antero Resources (NYSE:AR) have lost more than 96% (ouch!) of their value in the last five years and are now trading at $2 a share at the time of this writing. The natural gas and natural gas liquids (NGL) specialist has been caught between a proverbial rock and a hard place. It needs to keep production up to fulfill its pipeline commitments, but prices are so low that it just isn't profitable to do so.

Barring a miracle turnaround in the gas industry, is there any hope for Antero? Let's take a closer look and find out. 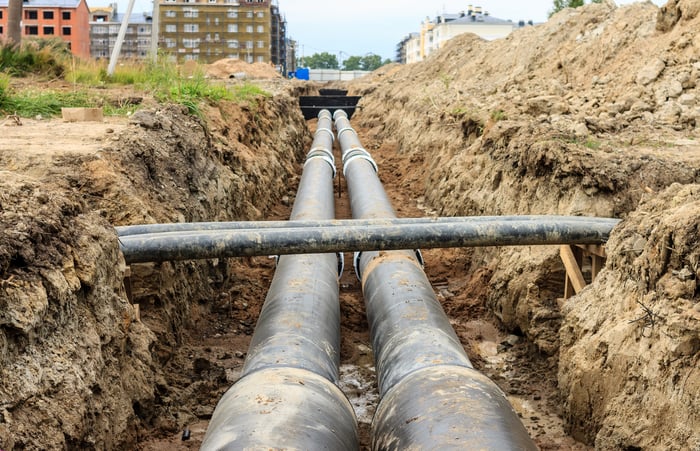 "Dry" natural gas -- that is, in its gaseous form as opposed to liquid -- is cheap to produce in the Marcellus and Utica shales in the Appalachian region. Unfortunately, it sells cheap, too. NGLs like propane and butane fare a bit better, but with domestic production booming, they still aren't fetching anything close to a good price. That has put Antero in a bind.

The company thought it had a way out of this conundrum when it bought one-third of the capacity on Energy Transfer's (NYSE:ET) new Mariner 2 East pipeline, which runs from Appalachia to export terminals on the Gulf Coast. NGL exports sell for significantly higher prices than domestic NGLs or dry gas, so getting its cheap-to-produce propane and butane down to the Gulf Coast should have been a winning move.

Unfortunately, the current petroleum production boom means the entire country is awash in cheap gas, which has driven prices down. That means Antero is operating at a loss, even though it's largely been able to sell its products at a premium to New York Mercantile Exchange (NYMEX) commodity prices.

Adding insult to injury, the company's Mariner 2 East contract is a "take or pay" contract, meaning that even if Antero slows production, it's still going to have to pay for the pipeline capacity it isn't even using (this is great news, by the way, for Energy Transfer). In the most recently completed quarter, Antero posted an adjusted net loss of $149.8 million, or $0.49 per share.

Luckily, management has a(nother) plan to right the ship.

Since it can't seem to drill its way out of the problem -- production continues to soar -- Antero is taking some major steps to reduce its expenses instead.

The company is reducing its overall headcount, slashing well completion expenses and even selling some of its pipeline capacity to third parties, a move it expects to reduce marketing expenses by $15 million. Antero is even trying some unique strategies to lower costs, including blending of some of its fracking wastewater with freshwater onsite and reusing it in well completions. This lowers the amount of water that needs to be trucked to and from well sites, resulting in major cost savings.

Is that enough to turn the company around?

Out of their hands

The short answer is, it's impossible to tell.

A lot depends on what happens in the overall petroleum market. In the third quarter, Antero was able to sell its products -- once derivatives and swaps were factored in -- for an average 40.6% premium to NYMEX prices...and it still lost money. It's worth noting that the company's average Q3 total cost per thousand cubic foot equivalent (Mcfe) of gas was $2.46. The NYMEX average price in Q3 was just $2.23/Mcfe.

If Antero can successfully reduce its expenses as projected, it won't make much of a dent. By 2020 it should have an average cost of $2.43: a savings of $0.03, with some additional savings on drilling expenses, which are computed separately.

The cost of gas, though, is largely out of Antero's hands. However, it seems as though a lot of gas drillers are making the same bet as Antero: trying to up production so it's already high when a gas price recovery occurs. But with everyone upping production, gas prices are more likely to fall than rise. If they fall by just $0.04/Mcfe, they'll more than offset Antero's cuts. If they fall further, they'll eat into the company's drilling expense savings.

So much for so little

The conventional wisdom used to be that increased production was a good thing: The more oil and gas you pumped, the more money you could make. But with gas prices so low and supply so high, that formula has been turned on its head, and there's nothing a single company can do about it.

If, as an industry, more companies decided to tap the breaks on production, the situation might ease, but companies are loath to do that and let their rivals be the beneficiaries. Antero's woes are the energy sector's woes right now, and investors would be wise not to jump in until things show some signs of sorting themselves out.