In the U.S., natural gas is booming! Thanks to advancements in fracking and horizontal drilling, the U.S. is the world's leading producer of natural gas. It's a great time to be in the industry.

In the U.S., natural gas is going bust! Stocks in the sector are way down. Natural gas prices have fallen so far that in at least one recent case, next-day prices actually turned negative. It's the worst possible time to be in the industry.

Yes, despite the impressive performance of U.S. natural gas production as a whole, individual producers like Apache (NASDAQ:APA), Antero Resources (NYSE:AR), and Chesapeake Energy (OTC:CHKA.Q) are suffering. There's a simple reason why -- and there's no easy way out. 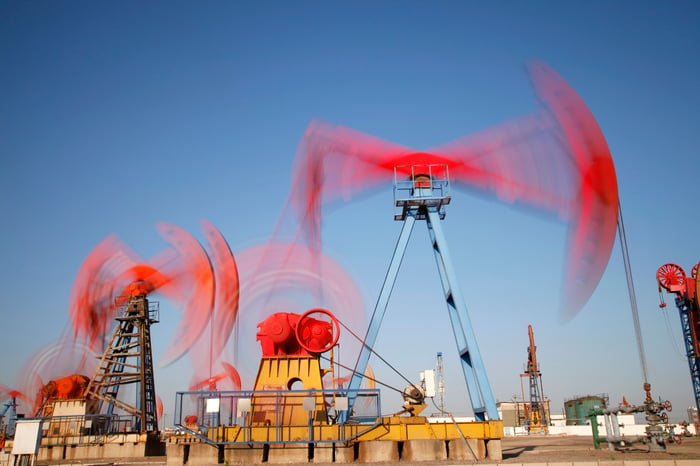 No matter how much the top U.S. gas drillers produce, they can't seem to get ahead of the stock market. Image source: Getty Images.

The year was 1968, and an economist named Garrett Hardin was trying to describe how the rational behavior for an individual could differ from what was rational behavior for a group. As an example, he asked readers to picture a common plot of grassy land that was free for grazing cow herds. For each individual herder, the rational move is to graze as many cows on the land as possible to maximize their personal benefit from the resource.

But, hang on! If everyone does that, the plot will become overgrazed, grass will stop growing there, and all the herders will suffer. The rational move for the individual isn't the same for the group. Hardin called this "The Tragedy of the Commons," and it's been an influential economic and resource-management concept ever since.

Of course, the Tragedy of the Commons wouldn't seem to apply to U.S. natural gas companies, because the commodity is so abundant. It's not in danger of being depleted (at least, not anytime soon). But the theory still applies.

Thanks to the advent of fracking and horizontal drilling, natural gas production began to boom in 2005, and the market forces of supply and demand -- faced with oversupply -- sent prices downward. The Henry Hub spot price of natural gas -- the U.S. benchmark -- has fallen by 40.1% over the last five years, to just $2.64 per million BTUs (MMBTU).

To put that into perspective, the average U.S. household uses only about 90 MMBTU of total energy per year, according to the U.S. Energy Information Administration. Of course, U.S. consumers aren't paying $2.64/mBTU for their energy, even if they heat their homes with gas or are served by a gas power plant (can you imagine an annual energy bill of just $237.60?). Other costs are added to cover the expenses of gas processing, pipe maintenance, taxes, a cut for the utility company's profits, etc.

Also, that Henry Hub price doesn't apply everywhere. In areas of the country where a lot of gas is being produced, prices can be much, much lower. That's especially true where there's not enough pipeline infrastructure to transport all the natural gas being extracted. These situations cause bottlenecks, and the result is that producers have to sell their gas at cheaper prices just to get rid of it so they can produce more.

In April, prices at the Waha Hub -- in the major natural-gas-producing Permian Basin of West Texas -- turned negative thanks to limited pipeline infrastructure and some equipment issues. That's right: Producers were actually paying shippers to take their gas away! When this news broke, shares of Apache -- a major Permian gas producer -- tumbled 10.9% in less than a week.

The tragedy of the hydrocarbons

In the near term, the rational solution for each company is to try to produce more natural gas to offset the lower margins they're earning. If a company's margin is cut in half, it could make the same amount of money by producing twice as much gas.

The problem is, if everyone starts churning out more hydrocarbons, prices will fall even further. That incentivizes more production, which increases supply and causes prices to drop again, until eventually, prices fall so low that everybody's operating at a loss. Some companies, including Antero, already seem to have hit this point, posting net losses despite record production in recent quarters. Antero's solution? Cut expenses, but keep drilling more so that it can be better poised to profit when prices recover.

Clearly, what really needs to happen is for producers to cut -- or at the very least, stop growing -- their production levels. But no gas producer wants to cut its own production only to have its production-increasing rivals reap the benefits. And, of course, colluding with other companies to limit production across the board would be illegal. So the cycle continues.

What these companies don't seem to realize is that putting a temporary halt to the drilling of new wells could be advantageous in the current environment.

Stock prices across the industry have fallen sharply over the past year -- Antero's and Chesapeake's shares are down by more than 80%. Any company that stopped spending money on bringing new wells into service and instead deployed that capital to buy back its own depressed shares would stop contributing to this tragedy of the commons and help stabilize its stock price. Even if it just hoarded its cash, it might later be able to pick up assets on the cheap from overdrilling rivals that wind up in cash crunches down the road.

But until companies like Antero, Apache, and Chesapeake start pursuing this strategy, or until some external factor changes the overall situation in the energy industry, investors can expect more of the same underperformance from these stocks.