A quirk of the calendar means there are six fewer days between Black Friday and Christmas Day this year than there were in 2018. The last time there were only 26 days to score big sales was in 2013, and retailers panicked, pushing "holiday creep" to its limits by offering sales earlier than ever, opening their doors earlier, and holding marathon sales events over the Thanksgiving Day weekend where they didn't close their doors for days.

Although Christmas is always a make-or-break season for retail, this year a number of retailers really need to score big on Black Friday if they ever hope to recover. Because consumers can exercise their discretion on where they shop, retail's plight is already bleak, so a winning start to Christmas shopping could give these stores necessary breathing room to get their recovery going. 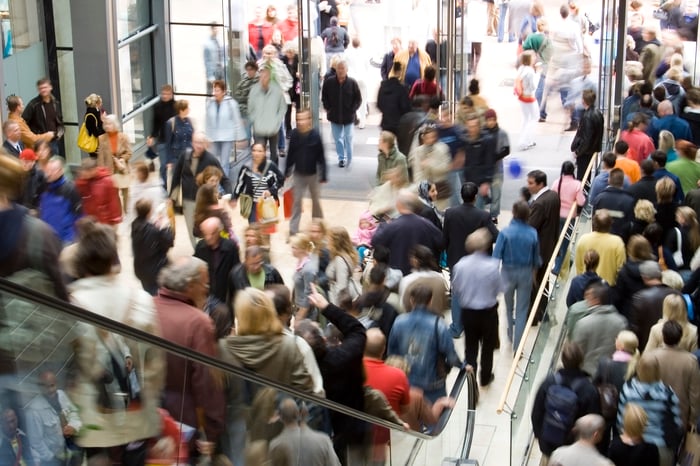 You know Bed Bath & Beyond (NASDAQ:BBBY) is worried when it is opening its doors on Thanksgiving Day for the first time ever. Its business has been slowing for years, and activist investors just wrested control of the company, clearing out a slow-acting board of directors, booting the company's founders, and dismissing the CEO.

They brought on Target chief merchandising officer Mark Tritton to lead the home goods retailer, and the new policy makes it clear Bed Bath & Beyond is committed to winning Black Friday with a whole new approach to the season. What's not so certain is how successful it will be.

Bed Bath & Beyond has squandered years of opportunity and now must wean its customer base away from a reliance on coupons to shop its stores, which even in more recent periods hasn't always worked. There are simply too many other places consumers can buy the goods Bed Bath & Beyond sells, especially online, so the retailer needs to wow everyone this year with a Black Friday win. It's a tall order for a distressed company.

Another retailer in turmoil that just ousted its CEO, Gap (NYSE:GPS) threw its future into question when it reported its third-quarter sales were going to be more dismal than expected, raising the specter of its Old Navy spinoff coming undone. Although the retailer says it is committed to finishing the process, the discount fast-fashion chain reported its third consecutive quarter of falling same-store sales, hardly the performance of a business investors will want to purchase.

Yet Gap needs Old Navy's separation to succeed so it can use the proceeds to pay down debt, which stands at $1.2 billion; it has some $6.6 billion in operating lease obligations. Old Navy is Gap's biggest chain and could reduce its burden by going its own way.

But Gap has more problems than that, as its namesake stores and Banana Republic (and Old Navy, too) rely heavily on shopping malls, which themselves are also ailing. Customer traffic is down, retailers are going bankrupt or closing stores and leaving vacancies, and malls are considering bailing out their tenants to keep them going. A Black Friday win for Gap would let investors know there is still hope for the brand.

When there are fewer sales days to make an impact and your brick-and-mortar business is being made irrelevant by the advent of the online world, you can't afford the luxury of shutting your doors on Thanksgiving Day. So GameStop (NYSE:GME) is bucking the trend of closing its stores on the holiday -- one which it followed last year -- and will open them this time around.

This is a sign of desperation, but the video game retailer needs every opportunity to bring in gamers to its recently redesigned stores, which position the retailer as a destination location for gamers to test out the latest titles and equipment.

GameStop has a sprawling footprint, however, that needs to be dramatically streamlined, because digital gaming and video game downloads mean a retail chain dedicated to physical media isn't as necessary as it once was. There will always be those who want physical games and consoles, but the future is online, and that makes GameStop a bit anachronistic.

Yet a big Black Friday splash could mean there's a chance gamers will notice its store redesign and return to try out the newest titles again and again, even if they ultimately purchase them online.

At the brink again

Yet another retailer with a new chief executive, J.C. Penney (OTC:JCPN.Q) seems to be in perpetual turnaround mode, with every season a do-or-die situation. Although the market briefly cheered the department store chain's recent earnings report, one which CEO Jill Soltau maintained showed the turnaround plan was gaining steam, net sales still tumbled 10% from the year-ago period. Comparable sales from stores open more than a year plunged more than 9%, even worse than the 8% decline analysts were expecting.

Wall Street seemed to like that J.C. Penney had significantly lowered its inventory levels, suggesting it had cleared out merchandise out of step with consumer tastes. What the department store needs now is to put its best self on display for Black Friday to convince consumers to shop its stores in the future.

J.C. Penney has pulled itself back from the brink several times, but this Christmas season may be its most important performance yet.