Please ensure Javascript is enabled for purposes of website accessibility
Free Article Join Over 1 Million Premium Members And Get More In-Depth Stock Guidance and Research
By Joe Tenebruso - Dec 4, 2019 at 9:30AM

These industry titans can help you grow your wealth.

Large-cap stocks don't have to be boring. Businesses with market capitalizations of more than $10 billion can certainly add ballast to your portfolio, but they can also provide a powerful growth element. In fact, some enormous companies are growing rapidly and have massive expansion opportunities still ahead. 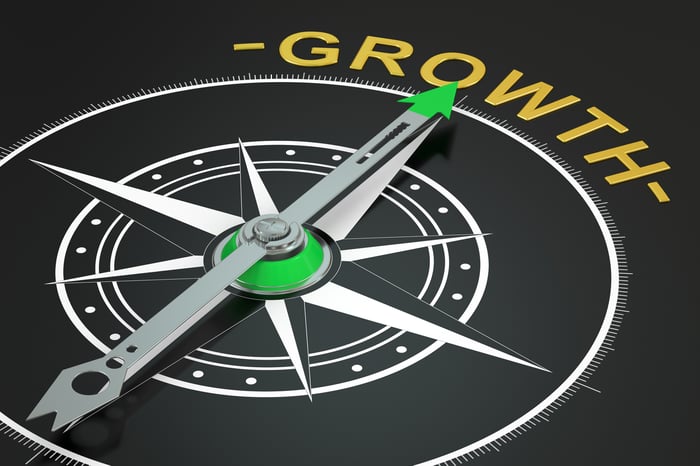 Alphabet is one of the most powerful companies on the planet. The $900 billion behemoth dominates the digital advertising market with its Google search engine. Google's share of the global internet search market routinely exceeds 90%. It's an incredibly profitable business -- one that's produced billions of dollars of profits for Alphabet and tremendous wealth for its shareholders.

Google is so dominant that regulators are investigating whether its advertising practices are allowing it to unfairly benefit over its rivals. But while regulatory concerns are a bit of a black cloud hanging over Alphabet's stock, even if Google is forced to make some concessions to appease lawmakers, it's unlikely to disrupt the search king's place atop the industry.

Moreover, Alphabet is investing aggressively to diversify its revenue base. Healthcare, banking, and video games are just some of the industries into which the company is expanding. Although some of these initiatives may fail to move the needle much, one or two big wins certainly might; some analysts estimate that Alphabet's self-driving car business alone could eventually be worth $100 billion.

All told, Alphabet gives investors many ways to win, and this large-cap stock is likely to become a lot larger in the years ahead.

Entertainment delivered via the internet is clearly where the world is headed. And when it comes to streaming video, Netflix is an industry titan.

Netflix's place atop the streaming industry has been extremely lucrative for shareholders. Its stock has created fortunes for long-term investors, including an incredible 3,600% gain over the past decade. Yet its shares are down about 25% from the highs they reached in June 2018, as concerns regarding Netflix's ballooning debt, cash flow generation, and intensifying competition have all weighed on its stock price in recent months.

These fears, however, are likely overblown. Netflix is taking on debt to accelerate its growth in international markets -- a massive opportunity that could help the company become far larger than it is today. Netflix's free cash flow situation should also improve over time as its subscriber base expands and management begins to pull back on spending.

And while new competition from the likes of Disney, AT&T, and Apple should not be overlooked, evidence suggests that these new services will not significantly impact Netflix's customer retention rates. The most likely outcome seems to be that Netflix subscribers will simply choose to add some of these new streaming options to their monthly budgets. Perhaps this will lead more people to cancel their cable plans, but Netflix's position as a core streaming service appears well secured.

As such, long-term investors may wish to view the recent pullback in Netflix's shares as a buying opportunity. The streaming revolution is still in its early innings, and even at its current $135 billion market cap, this industry leader has plenty of growth ahead.