Shares of Fox (NASDAQ:FOX) (NASDAQ:FOXA) were moving higher last month after the television network posted better-than-expected results in its third-quarter earnings report. The stock finished the month up 12%, according to data from S&P Global Market Intelligence.

As the chart below shows, the stock's biggest boost came in the beginning of the month, when its earnings report came out. 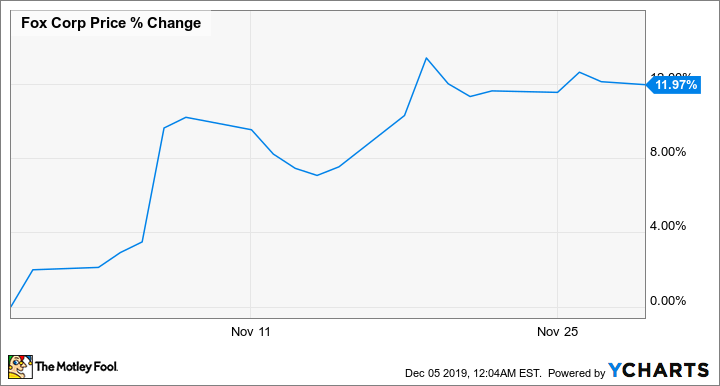 Shares of Fox, which now consists primarily of the Fox broadcast network and Fox cable news and sports networks, jumped 6% on Nov. 7 after the earnings report was posted. Revenue in the quarter rose 5% to $2.67 billion, ahead of estimates of $2.6 billion, and the company saw gains in both its cable network and broadcast television segments. Affiliate fees, or what it collects from cable and satellite providers, climbed 4%, a sign it's been able to pass along price increases even as cable subscribers dwindle.

CEO Lachlan Murdoch called it "a solid start," adding that Fox "delivered strong financial results in the quarter and we are making tremendous progress on the operational goals and strategic initiatives that we outlined at our Investor Day in May."

Despite the gains last month, Fox shares are still down 12% since the deal with Disney was completed in March. However, as the recent round of results shows, Fox's business should be able to deliver steady, if modest, growth now that it's shed its assets that were most threatened by the rise of video streaming.

Management did not give guidance, but over the next year, the company should also benefit from the boom in political advertising during the election year.