With the holiday season in full swing, many of us are more interested in our Amazon wish lists than our stock watch lists, but the end of the year can still be a great time to invest. It's especially important for investors to keep an eye on their top prospects -- stocks, not gifts -- and be ready to pounce if the opportunity arises.

Three stocks that you'll want to keep on your radar in December are Cintas (NASDAQ:CTAS), Casey's General Stores (NASDAQ:CASY), and ExxonMobil (NYSE:XOM). Here's why, and what you should look for that might push these watch list entries into your "buy" column. 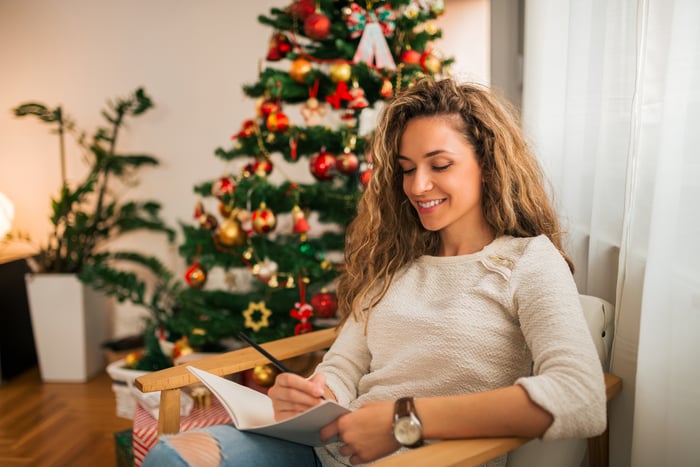 For investors, a list of top stocks to watch is almost as important as a holiday wish list. Image source: Getty Images.

It's hard to argue that uniform renter and business services provider Cintas hasn't been a successful long-term investment. Despite its large-cap status, Cintas' stock has skyrocketed 249.2% over the last five years, trouncing the S&P 500's 50.2% return over the same time frame. Record-low unemployment -- together with some strategic acquisitions -- has helped Cintas maintain steady growth in its core uniform rental segment.

Meanwhile, Cintas has also been investing in the other services it offers, including first aid kit restocking and fire and safety equipment maintenance and service. Its large existing customer base has allowed it to grow these other services -- which can be handled by the same employee and vehicle that does the uniform rental, to keep costs low -- at an even faster clip than its core uniform rental business.

Cintas has already increased its guidance for fiscal 2020 (which ends May 31, 2020), expecting top-line growth in the 6%-6.6% range over fiscal 2019, and even stronger bottom-line growth of 11.4%-12.8%. However, all these high expectations and soaring share price have pushed the stock's price-to-earnings ratio above 30 -- a 15-year high. That's a lofty valuation for a company that's likely to take a big hit if the cyclical labor market starts showing signs of weakness.

Still, Cintas' leading market position and growth prospects should keep it on your watch list, especially as the company reports Q2 earnings on Dec. 16.

A new take on an old business

Another company reporting earnings on Dec. 16 is Midwestern gas station operator Casey's General Stores. Like many other service station companies, Casey's sells gas, but the big money is in the food and retail sales from its convenience stores. Unlike many other chains, Casey's primarily operates in exurban and rural areas, which brings a unique set of challenges and opportunities.

Casey's new CEO, Darren Rebelez, has been overseeing a slew of initiatives to use technology to wring more value out of the existing business. These include a price optimization tool to adjust gas prices at individual locations, which resulted in a 400-basis-point fuel margin improvement after it debuted in Q1 2019; a new fleet card program for small business customers; and an app that allows customers to order food -- particularly the chain's popular pizzas -- in advance. These initiatives have Wall Street expecting big things from the stock.

Like Cintas, though, Casey's P/E ratio is near 30 -- 29.3, to be exact. That's practically an all-time high for the company, and raises concerns about whether the stock can be considered anything close to a bargain. Certainly, if Casey's releases another stellar earnings report, that valuation -- and its underlying share price -- could well go up again, but investors may want to sit this one out for now.

Although it won't report earnings until late January at the earliest, ExxonMobil is on the list of stocks to watch this December because of a recent event that a lot of investors missed. The oil major's dividend yield recently surpassed 5% for the first time in the 21st century.

In the year 2000, Exxon achieved Dividend Aristocrat status by increasing its dividend each year for 25 years. But in 2004, despite continuing to up its payout each year, its dividend yield lagged those of its big oil peers. That situation persisted until 2017, when its yield finally surpassed Chevron's. While its 5% yield is still a far cry from big yielders BP and Royal Dutch Shell (both of which currently pay more than 6.5%), it's creeping up on French peer Total's 5.5%.

Investors have been concerned about Exxon's declining production levels, especially as oil and gas prices have fallen this year. The company plans to turn things around through increased capital spending, but it's an ongoing process. A yield of 5% should encourage income investors to keep an eye on the situation at Exxon.

Eye on the ball

The holidays are a busy time, and it's easy to forget about investing until after the ball drops in Times Square. But savvy investors are constantly keeping at least one eye on their watch lists, no matter how busy things get. Amid all the hustle and bustle, consider adding Cintas, Casey's, and ExxonMobil to your watch list. And then, like Santa, be sure to check it (at least) twice.