Among energy companies, ExxonMobil (NYSE:XOM) stands out as an industry leader. The oil and gas giant's operations span the globe, and its fully integrated business includes not only production but also transportation and marketing of energy products across its network of upstream, midstream, and downstream assets.

ExxonMobil has also established itself as a favorite among dividend investors. Not only has it consistently paid quarterly dividends to shareholders, but it's also increased those payouts year after year. Yet even though ExxonMobil has gone through turbulent times in energy markets before, the current slump for oil and natural gas has some investors worried about its ability to keep rewarding them with dividend hikes. Here, we'll take a closer look at ExxonMobil and whether shareholders can expect higher dividends in 2020.

How ExxonMobil has handled dividends in the past

Dividend investors like stocks that give them predictable payouts, and ExxonMobil has done a good job of delivering income to its shareholders. The energy giant regularly makes boosts to its quarterly dividend every year during the spring months, including its most recent increase last May.

The size of ExxonMobil's dividend hikes has varied over time. During prosperous times for the oil and natural gas markets, it's not unusual for ExxonMobil to deliver huge increases, such as a greater than 20% hike in 2012. When oil markets are going through more difficult conditions, the size of ExxonMobil's dividend increases shrinks considerably, with a boost of just 3% coming in 2017. 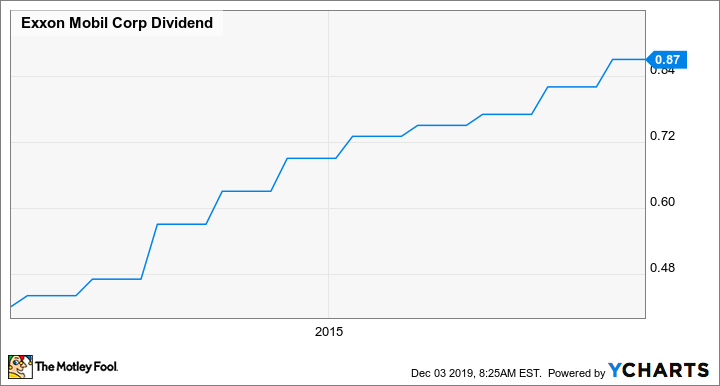 Over the past couple of years, ExxonMobil has given solid increases of around 6%, with a $0.05 per share increase earlier this year bringing the quarterly payout to its current level of $0.87 per share.

The problem that ExxonMobil currently faces is that it's had difficulty sustaining earnings growth in the most recent down period for oil and natural gas prices. After having posted annual net income in excess of $40 billion in the early 2010s, the energy giant earned less than $21 billion in 2018 and is on track to have an even weaker 2019. That's pushed the dividend payout ratio to nearly 100% of earnings, which is traditionally a danger sign for dividend investors. 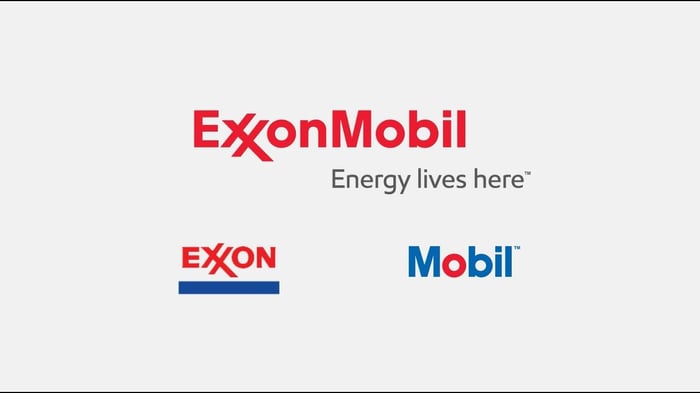 However, this isn't the first time ExxonMobil has gone through temporary slumps. The company doesn't raise its dividends by nearly as much as it could when energy markets are strong, giving it greater latitude to deal with inevitable cyclical downturns.

Moreover, ExxonMobil is working hard to expand profitably. A massive capital spending program is targeting acquisitions of promising assets in key areas around the world, with the goal of making the company more resilient even if energy prices stay low. Between lower-cost production and greater attention to areas like refining and chemicals, ExxonMobil has high hopes that it'll be able to emerge from the current soft period in the energy industry stronger than ever.

What's ExxonMobil likely to do with its dividend in 2020?

The fact that ExxonMobil delivered another $0.05 per share boost in 2019 despite some challenges was good news for dividend investors, but the recovery in crude oil that many have hoped for hasn't yet materialized. Because of that, shareholders should plan on just a token $0.02 per share increase in 2020, extending ExxonMobil's streak but signaling the need for capital spending discipline across its business.

Will ExxonMobil Raise Its Dividend in 2020? @themotleyfool #stocks $XOM Next Article
Current