The Internet of Things, or IoT for short, has been steadily growing over the past decade or so. This segment of the broader technology sector includes everything from Apple's (NASDAQ:AAPL) smartwatch to Internet-connected farm equipment and Amazon's Echo speakers.

But over the past few years, the number of IoT devices has surged, and the impact they're having for consumers, companies, and data itself is growing by the day. Here are just a few of the latest IoT stats you should know. 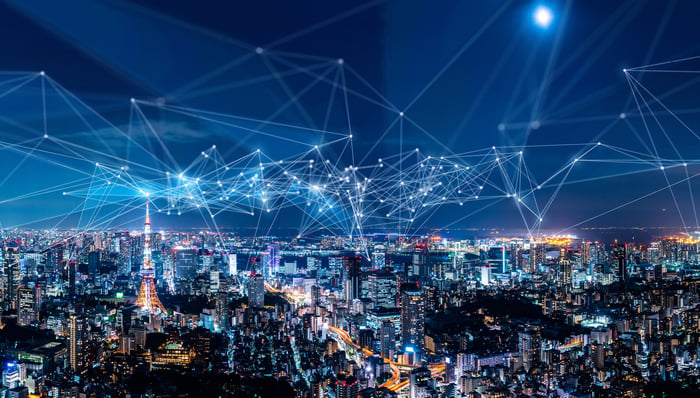 1. There will be 5.8 billion enterprise and automotive IoT devices by the end of 2020

The consumer side of the IoT gets a lot of attention, but the enterprise IoT and automotive connectivity markets are growing incredibly quickly as well. Research published by Gartner shows that these two segments of the IoT will have 5.8 billion IoT endpoints by the end of next year, a 21% increase from 2019.

Within the enterprise market, utilities will see the fastest adoption of IoT tech. "Electricity smart metering, both residential and commercial will boost the adoption of IoT among utilities," the report said, with 1.37 billion endpoints in 2020, up 17% from this year.

While still relatively lower in number than other enterprise IoT connections, automotive connectivity is on the rise as well, thanks to the expansion of 5G cellular.

Wireless carriers, including Verizon Communications (NYSE:VZ), are just now beginning to roll out 5G networks in select cities, but in about five years these networks will dominate IoT devices, according to Strategy Analytics. The research firm says that the automotive sector, in particular, will see rapid growth in new IoT devices by 2025.

"The low latency benefits of 5G will allow IoT use cases where near-instantaneous communications are required, such as platooning of trucks, autonomous driving, low latency, and [Quality of Service] in manufacturing and areas like remote surgery in healthcare," Andrew Brown, the Executive Director of Enterprise and IoT Research at Strategy Analytics, said in a press release.

Ford (NYSE:F) has already said that its entire vehicle lineup will be equipped with 5G modems by 2022. Adding 5G, with faster connection speeds and lower latency (how quickly devices and can communicate with each other), could eventually allow Ford's vehicles to communicate with other vehicles and infrastructure to more easily avoid collisions.

While automotive and enterprise uses for the IoT are huge, consumer tech companies are benefiting a lot from IoT's growth as well. Perhaps one of the biggest companies to benefit from the growth of consumer wearable tech is Apple.

Apple is now on the fifth generation of its Apple Watch, which is the best-selling smartwatch globally, and the company has a growing lineup of ear-worn wearable tech with its AirPods, AirPods Pro, and Beats by Dre devices.

Apple's revenue from its wearables, home, and accessories segment jumped 54% in the fiscal fourth quarter, and with this market still poised for more growth in the coming years, the tech leader is sure to benefit.

As you can see from the stats and predictions above, there's no stopping the IoT's growth. The trick for investors is to find an area of the IoT that makes sense to them and invest in the companies that are dominating in that niche. I think Apple's focus on wearable tech, along with its dominant position in the space, could have significant long-term payoffs for both the company and its investors. Wearables may not be Apple's biggest moneymaker, but it should be a very nice addition to its growing services segment and other bets the company is making.