It's been a long wait, but Boeing (NYSE:BA) is finally, almost, ready to go back to space -- bringing astronauts along for the ride.

On December 20, 2019, at an hour yet to be announced, Boeing plans to launch its CST-100 Starliner commercial crew vessel from Cape Canaveral on a voyage to the International Space Station.

Aboard the spacecraft for this initial, uncrewed flight, will be a high-tech mannequin named "Rosie," there to record data that will be reviewed to ensure the vessel is safe for human spaceflight. Assuming all goes well with that data and with the mission overall, Boeing's Starliner should be able to begin carrying astronauts to ISS on paid, commercial missions contracted with NASA sometime next year. 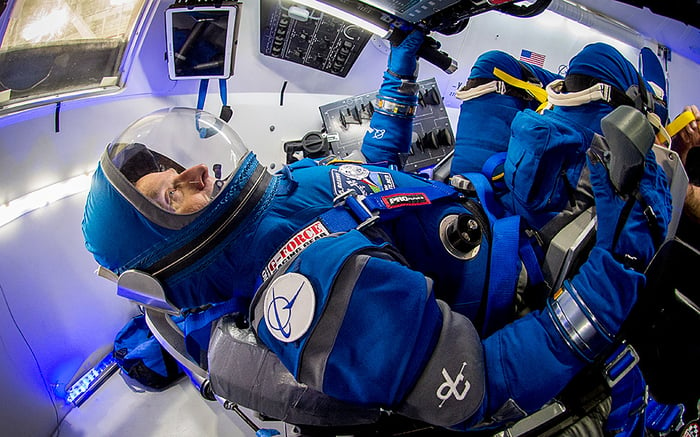 At that point, it should be safe to say that Boeing is back in the race with SpaceX to become the first American company to resume launching crewed spacecraft from U.S. territory to ISS -- for the first time since NASA retired the space shuttle in 2011.

Currently, SpaceX has the lead in this race. Despite a setback in April, which saw SpaceX's inaugural Crew Dragon destroyed on its test stand during an engine test, SpaceX was first to send an unmanned version of its crew vessel (a SpaceX Crew Dragon) into space back in March. SpaceX has since identified and fixed (we hope) the problem that led to the April anomaly. Now, both companies are targeting unspecified 2020 launch dates for their first crewed missions to ISS.

Tentative schedules have SpaceX launching Crew Dragon potentially as early as Q1 2020, with Boeing's Starliner following in Q2. But if Boeing's test goes well, it's possible Boeing will still put astronauts on ISS before SpaceX does.

Is this particular space race something investors should even care about?

In a sense, I suppose we should. Whichever company successfully, and safely, returns American astronauts to space under their own power, from their own territory, will certainly claim bragging rights. That company will ensure that in future years, NASA monies that for eight long years have subsidized the Russian space program by renting rides for our astronauts aboard Russian rockets -- at a cost of $82 million a "seat" -- will henceforth remain here at home and pay for flights conducted by Boeing, SpaceX, or hopefully both.

In an industry where companies seem to announce a new "first-ever" achievement on a monthly, or even weekly basis, I suspect the first company to reach ISS with astronauts on board will become the new fan favorite, as investors quickly forget which company was first to send up a mannequin. But in just a few years' time, I suspect we'll likewise forget which company was first to send astronauts to ISS as investors' focus shifts to which company (or companies) will succeed in returning Americans to the moon, then to Mars, and then beyond.

In the big picture, though, both of these companies -- Boeing and SpaceX -- have promised NASA they will be able to build space capsules that are safe for crewed flight. As long as each company succeeds, and both Starliner and Crew Dragon are certified for such missions sometime in 2020, their respective businesses should profit going forward.

Instead of focusing on "who's first," then, my advice to investors will be to keep close track of who's most reliable, and who's cheapest. At present, Boeing (in the form of United Launch Alliance, its joint venture with Lockheed Martin) is the undisputed king of reliability, having conducted 135 straight successful rocket launches to orbit without suffering a single loss of mission. (December 20's Starliner launch will hopefully be 136).

SpaceX's record for reliability is a bit shorter, although at the rate it's launching rockets -- 12 Starlink missions alone are planned for next year, and that's not even counting the rockets it launches for its customers -- SpaceX is rapidly closing the reliability gap with Boeing. Meanwhile, SpaceX's cost of space launch simply can't be beat. On crewed missions alone, NASA's Office of the Inspector General says SpaceX astronaut "seats" will cost just $55 million, versus $90 million per seat for astronauts boarding Boeing's Starliner.

No sooner will the race for "first" be decided than the real race will begin: to see who can drive down costs the fastest while keeping reliability a high priority.