I went shopping on the final trading day of 2018, and I plan on following suit this year. Diving into the equities market seemed a lot more brazen a year ago, with stocks reeling from mounting concerns about the economy and rising trade tensions with China. The climate is kinder on both fronts now, but the market's buoyancy over the past year is making it harder to go bargain hunting.

I made five purchases as the year wrapped up, initiating new positions in Glu Mobile (NASDAQ:GLUU), SeaWorld Entertainment (NYSE:SEAS), Sonos (NASDAQ:SONO), and Tencent Music Entertainment (NYSE:TME) and adding to my earlier position in Roku (NASDAQ:ROKU). There was never a dull moment as 2019 played out, as none of the stocks stood still.

Two of the investments have tanked this year with double-digit declines in a hot market. Thankfully the other three handily beat the market. Let's go over how the five stocks that seemed so compelling in the final trading hours of 2018 performed this year, as I gear up to seek out the top stocks of 2020. 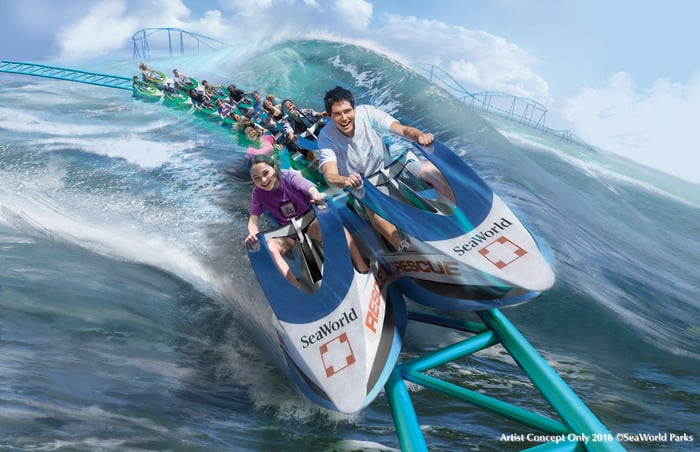 Glu Mobile had more than doubled in 2018, giving it just the right momentum to finally start popping on Wall Street's radar. The publisher of mobile games was finding big hits in some unlikely titles. Design Home was making players get excited about interior decorating. Its Tap Sports Baseball, licensed by Major League Baseball, was growing its audience of diamond dashers with every passing annual installment. Even some of the earlier games that put Glu Mobile on the map -- Kim Kardashian: Hollywood and Covet Fashion -- were showing signs of life.

The stock would go on to hit its highest level in more than a decade early in 2019, but things have naturally come undone in recent months. Glu Mobile would go on to put investors through back-to-back disappointing quarters, and new releases haven't been enough to sway investor concerns on the sustainability of its earlier hits. The biggest dagger was when it hosed down its bookings guidance over the summer, a clear sign that something was wrong.

SeaWorld Entertainment had a huge year in 2018. The 8.6% surge in attendance was the amusement park operator's biggest jump in its first five years as a public company, but that's not saying much after four straight years of declines before that. It seemed as if the chain was finally over the negative sentiment that started with the Blackfish documentary on captive killer whales in 2013, and getting into the tank with SeaWorld seemed like the right call.

I still own four of the five stocks I bought on Dec. 31 last year, and this is the one I sold. I unloaded SeaWorld in late May, locking in a respectable 43% gain. I felt that the stock gains had outpaced the improvement in fundamentals, and I was also not entirely won over by how its CEO search played out. I was right about the latter concern, as SeaWorld is now on its third CEO of 2019. But the operator of themed amusement and water parks is making the most of the healthy economy. I may step back in as an investor if the new CEO impresses, or if the stock sells off again.

I bought into the pioneer of wireless speaker systems when it was a broken IPO, and technically it is still that, with Monday's $14.99 close a penny shy of its $15 debut two summers ago. But there were a lot of things to like about Sonos. Despite a glut of tech giants trying to push digital products down our throats, Sonos is still finding ways to matter. It has come through with 14 consecutive years of growth, including double-digit gains in each of the past three years.

Sonos has always had a reputation for quality, but now it's also raising the bar with innovations. It teamed up with IKEA earlier this year to put out a line of speakers that double as stylish table-lamp bases, and it just rolled out its first portable solution. If you don't think the Sonos story is impressive, turn up the volume and give it another listen.

The second of my investments to turn in a disappointing 2019 is Tencent Music, China's largest streaming music player with 75% of the country's market. It went public at $13 near the end of 2018, and buying in at a time when investors were swearing off Chinese growth stocks seemed to be a savvy contrarian play. Many Chinese darlings have bounced back after a brutal close to 2018, but Tencent Music has been playing in a different key.

I'm still a believer. Investors tend to view streaming music apps as low-margin endeavors, but Tencent Music's dominance is allowing it to succeed with high-margin offerings, including virtual gifting for its karaoke platform. The company is wrapping up its fourth straight year of profitability, and even if revenue growth decelerated to 31% in its latest quarter, that's the kind of increase that most stateside players would love to be reporting.

The one stock I did add to at the end of last year wound up being one of the market's biggest winners of 2019. Roku has come into its own as a market darling as the no-brainer way to play the streaming video revolution. There's a glut of streaming services out there, and Roku mans the popular hub that cashes in no matter which players win or lose.

There were 32.3 million Roku accounts at the end of September, 36% more than the platform was reaching a year earlier. Revenue is growing even faster, as consumption and average revenue per user are clocking in with double-digit percentage gains. This year will be a hard act to follow for Roku, but the arrival of many compelling new services lately makes it the obvious play for investors wanting some skin in the streaming media game.