Manufacturing stocks aren't particularly sexy names in any market environment. But they've been especially uninspiring for the past year, perceived as highly vulnerable to the trade/tariff war that's still under way between China and the United States.

As we look back, however, it's becoming clear that the effect of political turmoil hasn't been quite as difficult as first feared. In the same vein, an economic recession doesn't seem quite as likely as it did just a few months ago. That backdrop makes some of the more industrial names that investors have been avoiding of late a little more -- and perhaps a lot more -- worthy. Here's a rundown of three picks from the sector that are arguably still undervalued, or underestimated, or both. 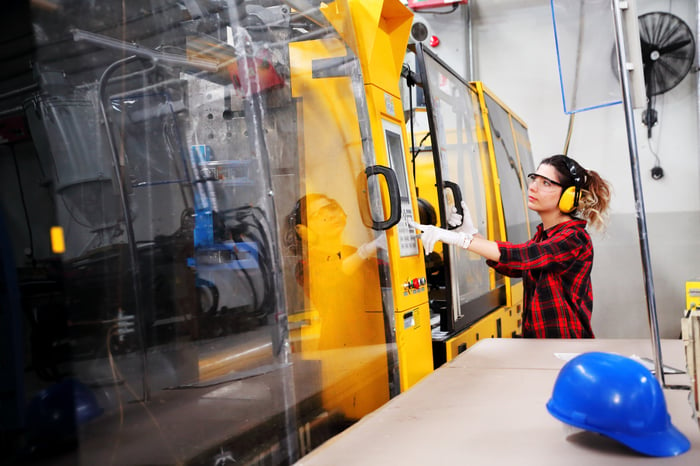 The Owens Corning (NYSE:OC) name has been a familiar one to investors for decades now, in one way or another. Though it's been reconfigured several times during its history, the current one focused on fiberglass insulation, roofing shingles, and a variety of composite materials is as potent as any of the company's past.

Not everyone readily agrees that the company's foreseeable future is bright. The stock fell a stunning 50% between early 2018 and late 2018 on concerns that the construction market would soon implode. While it's recovered some of that lost ground this year, it's still more than thirty points below its peak value.

The construction market may not be in the trouble investors have feared it's in, though. In November, Wells Fargo analyst Truman Patterson upgraded the stock to an outperform rating, pointing to surprisingly strong demand for construction materials in San Francisco, where Owens Corning does 70% of its U.S. residential business. Patterson believes this undertow will be enough to produce earnings of $5.34 per share next fiscal year, versus the consensus of $5.23.

It's not a major stretch. The industry is already operating near its maximum manufacturing capacity, which Patterson says gives it pricing power that could persist into the beginning of 2020. November's housing starts and building permits data released in mid-December confirmed the new-construction growth wave, with the seasonally adjusted rate of 1.46 million issued permits hitting a twelve-year high.

Generac Holdings (NYSE:GNRC), on the other hand, is anything but a household name. That's changing though, as times and technology march forward.

For better or worse, wildfires that ravaged much of California in 2018 prompted precautionary power outages across the state in 2019, underscoring how much of the nation's power infrastructure simply isn't reliable. If consumers and companies want reliable electricity, they need to provide their own backup solutions.

Enter Generac Holdings, which manufactures a variety of power generators for home as well as large-scale use. It's also entered the energy storage arena that makes solar power a viable option (since the sun doesn't shine at night). The company is just crushing it now, with last quarter's $601 million worth of revenue marking a record quarter for the company. CEO Aaron Jagdfeld bluntly explained shortly after the company posted record-breaking quarterly results at the end of October: "We're seeing, obviously as you would expect, incredible demand right now. Well beyond what we would normally see out West."

The market has become aware of the dynamic, by the way. The stock more than doubled over the course of 2019, as investors recognized the marketability of the solutions Generac brings to the table. Even so, Generac Holdings shares remain affordable given the coming year's opportunity. They're priced at less than 20 times next year's estimated earnings, which could still underestimate what lies ahead.

Finally, add defense and aerospace contractor Textron (NYSE:TXT) to your list of manufacturing stocks to consider as the new year gets rolling.

You may be more familiar with the company than you realize. Textron is the parent company of Bell helicopters, and while it makes plenty of hardware for the Department of Defense, it's not just a defense contractor. The company recently celebrated joining a wing to fuselage for civilian aircraft name Cessna. It's not just aircraft either. It makes everything from golf carts to Arctic Cat brand snowmobiles to Jacobsen riding mowers to a variety of military land vehicles.

That much diversity is a double-edged sword. On the one hand, it means the company always has a product line that's at least modestly marketable. On the other hand, that many businesses mean its biggest successes can often be watered down by weaker-performing divisions. On balance, though, the stability of diversity makes a compelling case for what's a relatively inexpensive name right now.

The kicker: After accumulating the kind of personnel bloat that can sneak up on a company as diverse as Textron is, the organization announced it's culling several salaried positions at Textron Aviation, even as it adds more hourly pay positions. Any layoffs are a tough decision, but investors can celebrate the fact that Textron is willing to restructure itself in a way that makes more sense for the company right now.