Please ensure Javascript is enabled for purposes of website accessibility
Log In Help Join The Motley Fool
Free Article Join Over 1 Million Premium Members And Get More In-Depth Stock Guidance and Research
By Prosper Junior Bakiny - Dec 31, 2019 at 7:45AM

Aphria looks set to bounce back from its troubles over the next year.

A little more than a year ago, Canada legalized recreational use of pot for people over the age of 18. This momentous event was welcomed by investors who saw an opportunity to cash in on the potential growth of marijuana sales by investing in Canadian cannabis companies. Unfortunately, things haven't gone smoothly in the Canadian market for a myriad of reasons.

First, Health Canada has been slow to issue retail licenses, leading to a shortage of cannabis stores. Without enough stores, the legal supply of cannabis products hasn't been able to meet the demand. Second, the illegal cannabis market in Canada is still thriving, and it's eaten up much of the business investors hoped would move into legal channels. Third, pot companies recorded poor financial results this year. In short, 2019 wasn't a great year for Canadian cannabis companies. 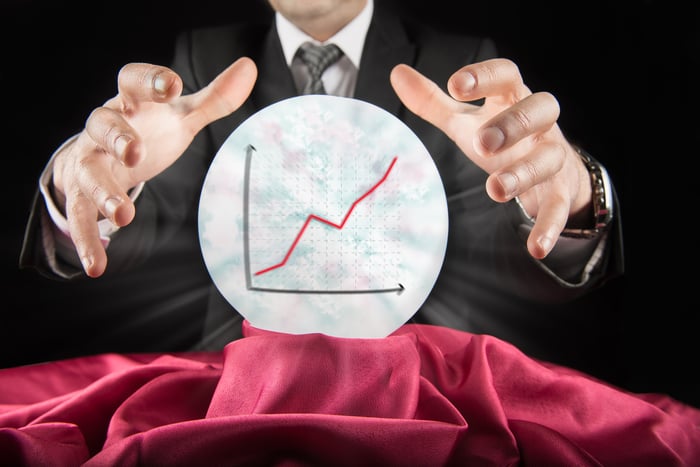 Aphria (APHA) is one of the largest cannabis companies by market cap, and the company is engaged in the growing, distribution, and sale of medical and recreational marijuana both in Canada and elsewhere. Like the rest of the cannabis industry, Aphria has had its share of problems this year. The company dealt with the fallout from allegations made by short-sellers that its Latin America acquisitions were a front by some of its top executives to enrich themselves. Former CEO Vic Neufeld stepped down as a result of this drama in January, and the company now has an interim CEO named Irwin Simon. However, the Ontario-based pot grower seems to have put this issue in the rearview mirror.

Aphria came out better than most of its peers during the last earnings seasons, posting a net revenue figure of $126 million Canadian dollars, an operating income of CA$4 million, and a net income of CA$16.44 million. Aphria's stock also performed better than most of its competitors on the stock market this year: Its shares are down by 17% since early January. By contrast, the industry as a whole -- as measured by the Horizons Marijuana Life Sciences Index ETF -- is down by 44% since the beginning of the year, while one of Aphria's biggest competitors, Canopy Growth (CGC -12.07%), has seen its shares plunge by 31% over the same period.

Will Aphria continue to outpace most of its peers over the next 12 months? Let's look into how the company will navigate the cannabis market -- both in Canada and abroad -- over the next year.

A turnaround in the Canadian cannabis market?

Aphria's standing in the Canadian market is good. The company is one of the few that have managed to sign supply agreements with every Canadian province. Aphria is also set to become one of the leaders in terms of production capacity, with a projected output of about 255,000 kilograms per year. And despite the shortage of retail stores in Canada, things will likely get much better from here on out.

This is great news for cannabis companies, and given Aphria's standing in its domestic market, it should be able to profit from the rollout of more cannabis stores. While Aphria does not have its own retail stores, the company expects to successfully "steal" additional shelf space in those retail outlets where its products are sold thanks to the strength of its brands. Simon said, "the opportunities for us in the retail market with additional stores opening up is tremendous."

Further, the market for derivative products opened on Oct. 17, as well. Aphria is looking to benefit from this market. During its first quarter 2020 earnings conference call, Aphria's interim CEO gave a breakdown of the company's portfolio of products moving forward: "Our internal models are really based around 60% market share for dried cannabis, 20% to 30% for vapes, and the remainder being split between drinks, edibles, and the other new product formats."

With more retail stores to help the dried flower cannabis market and a brand new market for high-margin derivative products, Aphria will definitely see its domestic sales figures rise significantly over the next year.

Aphria's German subsidiary CC Pharma is the main reason behind its recent stellar financial results. During its latest reported quarter, revenue from CC Pharma accounted for approximately 74% of the company's revenue.

Aphria projected that its revenue for its current fiscal year should be at least CA$650 million ($494 million), with its distribution revenue (most of which comes from CC Pharma) accounting for a little more than half of that. This implies that its distribution revenue should be at least 325 million Canadian dollars (about $247 million) for the full fiscal year.

The next year looks promising for Aphria

Although 2019 was a tough year for Aphria, several tailwinds should help the company perform better throughout the next year. There will likely be far more legally licensed cannabis retail stores in Canada, and the opening of the derivative market north of the border should help the company's revenue grow too.

Finally, Aphria's international operations, particularly in Germany, should continue growing and contributing significantly to its top line. For those reasons, Aphria looks like one of the better stocks to buy for those looking to profit from the marijuana sector in 2020.