Illumina (NASDAQ:ILMN) is a giant in the field of DNA sequencing. Using its machines, biotech companies can design drugs to target specific cell receptors in the human body. Illumina's stock has been a monster for years; it's up 5,791% since the company's initial public offering in 2000.

Guardant Health (NASDAQ:GH) is a fast-growing oncology company that is replacing tissue sampling for cancers with a simple blood test. When a patient has an advanced cancer, doctors can use the company's liquid biopsy called Guardant360 to determine the cancer's genomic profile. This blood test is far simpler, easier, and safer than removing tissue from a patient's organs. Guardant's stock is up 165% since its initial public offering in 2018, dwarfing the S&P 500 over that time span. 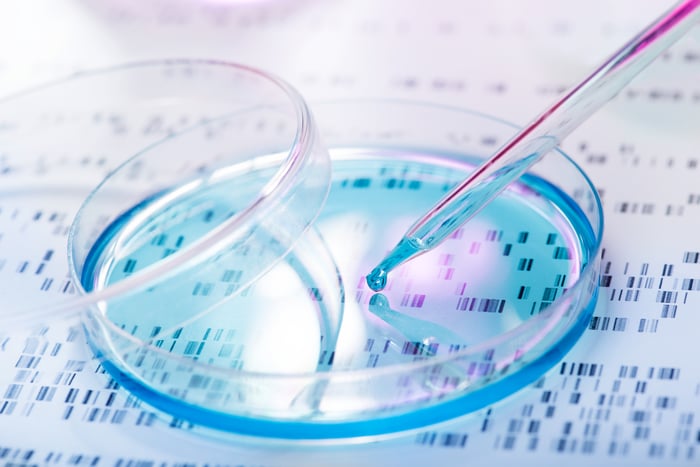 Illumina is a highly successful company, with $907 million in revenue in its most recent quarter, and $234 million in profit. Its net margin was 26% for the quarter. Illumina is sitting on $3.16 billion in cash, with only $1.34 billion in debts, for a net cash position of $1.82 billion.

The bad news is that Illumina's revenue growth has slowed to a crawl. In its most recent quarter, sales were up only 6% year over year. The stock was hit hard earlier this year when the company slashed its growth estimates. And the stock is still priced for high growth, trading at 14 times sales and 50 times earnings.

Fast-growing Guardant Health is unprofitable right now, spending money to achieve market dominance. The company had $60 million in sales in its most recent quarter, up 181% from this time last year. While the company isn't profitable yet, gross margins are quite high, hitting 70% in the third quarter. (Illumina has gross margins of 72%.) Guardant has $522 million in cash and $8 million in debt, for a net cash position of $514 million.

Illumina controls an estimated 80% of the next generation sequencing (NGS) market for analyzing the human genome. Illumina has won its market dominance by focusing on short-read data sequencing, which for many years has been the cheapest, fastest, and most accurate solution in the market.

By being a top dog and first mover, Illumina has a very large base of customers who have already paid a lot of money to buy one of Illumina's machines. Similar to Intuitive Surgical, Illumina uses a razor-and-blade model. The real money for Illumina is not in the one-time purchase of its sequencing machine, but all the follow-up revenues the company receives when the biotech or research lab uses the machine to sequence a genome. In its first three quarters of 2019, for instance, Illumina had $390 million in instrument revenue and $1.73 billion in consumables revenue.

Guardant Health has a lot of room to grow in its immediate markets. Guardant360 has a $4 billion opportunity among patients with advanced-stage cancer. And the company's GuardantOMNI test -- a broader test that looks at 500 genes instead of the 73 genes in the Guardant360 -- has a $2 billion opportunity in finding patients with a suitable genetic profile for a clinical study.

Right now it seems Guardant Health has a larger future upside than Illumina. On the other hand, Illumina's future revenues are far more assured.

Both companies face serious competitive and regulatory threats. One big concern for Illumina is that the company has a pressing need to add a different kind of NGS technology to its solution. Many scientific researchers are finding that Illumina's short-read machines -- while fast, cheap, and accurate -- are incomplete and insufficient for their needs. Illumina's sequence machines chop DNA into very tiny strands, say 150 base pairs in length. But some researchers are finding they need much longer strands to be analyzed. Pacific Biosciences (NASDAQ:PACB) sells machines that can read strands up to 100,000 base pairs long. And private Oxford Nanopore claims that its machine can read DNA strands up to 1,000,000 base pairs long.

Illumina is seeking to fill this hole in its offering by acquiring Pacific Biosciences. And this is where Illumina's market dominance is now hurting it. State regulators in the U.K. and U.S. are blocking this deal out of fear that Illumina is too big and powerful already, and is on the way to becoming a monopoly. The Federal Trade Commission alleges that Illumina "is seeking to unlawfully maintain its monopoly in the U.S. market for next-generation DNA sequencing (NGS) systems by extinguishing PacBio as a nascent competitive threat."

It seems rather bizarre to claim that Illumina is a "monopoly" when it's competing with Roche (OTC:RHHBY), a $274 billion mega-cap that once tried to acquire Illumina. Nevertheless, Illumina's attempt to acquire PacBio appears stymied by the government.

As for Guardant Health, the fast-growing company is also facing large and powerful competitors. Roche, for instance, has a subsidiary called Foundation Medicine, a company it acquired in 2018. Foundation is a direct competitor with Guardant in its immediate markets. And now Foundation has Roche's salesforce to expand its markets.

Another competitor with a liquid biopsy to detect early cancer is a private start-up called Grail, spun out of Illumina, and backed by an all-star roster of names including Jeff Bezos, Bill Gates, Alphabet, Johnson & Johnson, Merck, and Bristol-Myers Squibb. Grail's test -- which is designed to look for multiple cancers with one blood sample -- was given a "breakthrough device" designation by the U.S. Food and Drug Administration, which will help speed its way through clinical trials.

Both stocks are highly expensive. Guardant Health has exceptional growth right now, and as long as the company can continue to grow at its fast pace, the stock should continue to rise. Illumina has a dominant competitive edge in its market, but its revenue growth has stalled. Its high-priced stock seems risky right now. Based on valuation, market opportunity, and competitive threats, it appears that Guardant Health has the advantage today.