Amazon's (NASDAQ:AMZN) Fire TV closed out 2019 with 40 million active users around the world. That's significantly more than the 32.3 million rival Roku (NASDAQ:ROKU) reported it closed out the third quarter with in September, and it's up about 10 million from this time last year.

Amazon has found success with its Fire TV devices and smart TV partnerships largely thanks to its massive presence in online retail. Fire TV devices were some of Amazon's best-selling items this holiday season. And the platform is a very important piece of its rapidly growing digital advertising business.

But sales slowed considerably in the fourth quarter compared to a year ago. Amazon reported 37 million active accounts at the start of September, so it added about three million in the four months since then. By comparison, it added around five million new users in the three months from October 2018 to January 2019.

Meanwhile, Roku's user additions have increased on an absolute basis. It added 8.5 million new users over the 12 months ending in September, compared to 7.1 million additions in the prior 12 months. Roku's growth is fueled by its expanding partnerships with smart TV manufacturers and its international push. Both seem to have finally cut into Fire TV's momentum. 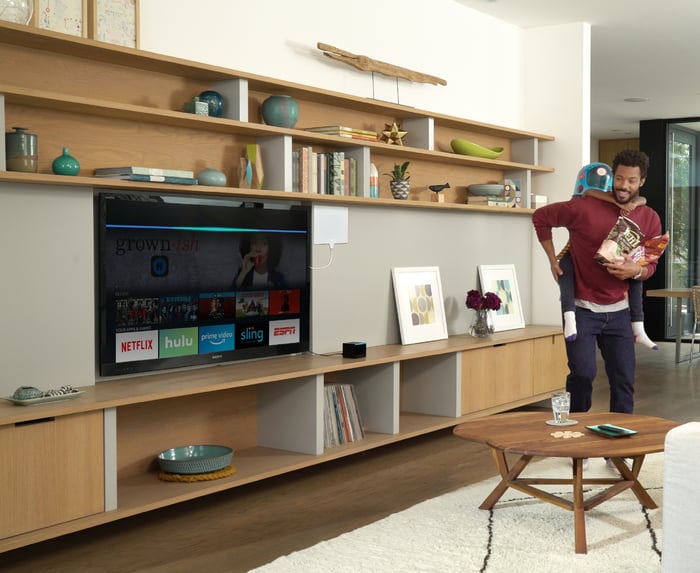 Roku's growing presence in the smart TV market hasn't gone unnoticed by investors or Amazon. Roku TVs accounted for about one-third of smart TV sales in the U.S. throughout 2019.

Growing share of the smart-TV market is extremely valuable. Smart TV owners are more likely to engage with the connected TV platform and less likely to switch to a competing platform due to the embedded operating system.

Amazon made a big expansion into the smart TV market in January last year, and it's doubling down again this year with an expansion of the Fire TV Edition program. "In 2019, more than 50 Fire TV Edition smart TVs and soundbars have launched from global brands like Grundig, JVC, Onida, and Anker and retailers like Best Buy, Currys PC World, and MediaMarktSaturn (coming 2020)," Amazon wrote in a press release. "Amazon will continue its international expansion with more brands launching Fire TV Edition smart TVs in the United States, Canada, India, United Kingdom, Ireland, Germany, Austria, Italy, Spain, and Mexico in the coming year."

Not to be outdone, Roku announced 15 TV brands will launch Roku TV models in Canada, Mexico, the United States, and the United Kingdom in 2020.

Along with its announcement of new smart TV manufacturing and retail partnerships, Amazon announced a couple of new programs that offer alternative distribution for the Fire TV platform.

Most promising is the introduction of Fire TV Edition for Operators. The program enables pay-TV distributors to integrate the Fire TV operating system into their set-top box. Amazon already has partnerships with Tata Sky in India and Verizon in the United States.

Smaller pay-TV providers may be interested in using the platform to make their product more appealing to consumers. But larger distributors have developed their own proprietary platform. Comcast has had a lot of success attracting and retaining customers through its X1 platform, and it launched its own streaming device based on the platform last year.

Amazon is also partnering with car manufacturers to put Fire TV in vehicle entertainment systems. But it's hard to imagine the Fire TV for Autos platform having a major impact on consumers' purchasing decisions, whether that's for a $35,000 car, a $350 smart TV, or a $35 streaming stick.

For all its success attracting users to its Fire TV platform, Amazon is still very much playing catch-up. Roku users are significantly more engaged than Fire TV users, offering many more opportunities for Roku to monetize its users through advertising and distribution commissions compared to Amazon.

Amazon's efforts to continue expanding the Fire TV with partnerships is its best strategy going forward to increase average engagement, but in many cases, it's still behind Roku in terms of partnership manufacturing and distribution agreements. Roku is expected to report its fourth quarter results early next month, so it'll be interesting to see if the smaller competitor's growth slowed like Amazon's or continued to accelerate.