Shares of Alcoa (NYSE:AA) fell 19.1% in 2019, according to data provided by S&P Global Market Intelligence, badly underperforming the S&P 500. The aluminum producer faced weakening demand and macroeconomic headwinds during the year, but is taking steps to try to prevent a repeat performance in 2020. 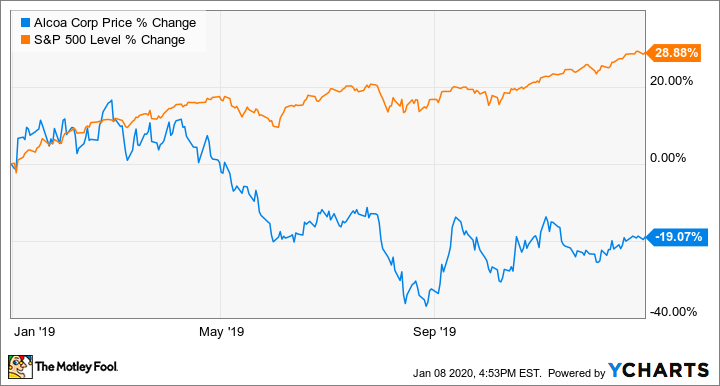 Alcoa has been in flux for the better part of the current century, first assembling a collection of aerospace parts companies and other finished metal parts businesses in an attempt to escape the commodity cycle, and then in 2016 spinning off that collection as Arconic and returning to its metal production roots.

In 2019, Alcoa shareholders got the worst part of that trade. While Arconic shares were up 82.5% thanks to continued strong demand for aerospace components and the company's cost-cutting efforts, Alcoa faced demand pressure due to a slowdown in China and other emerging markets compounded by continued uncertainty as the U.S. engaged in trade wars against China and other countries. 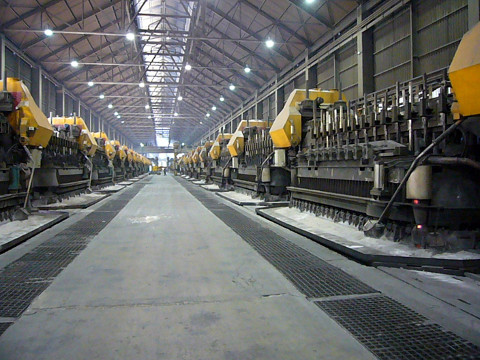 Midyear, Alcoa reduced its full-year forecast for growth in global aluminum demand to a range of 1.25% to 2.25%, down from previous expectations for 2% to 3% growth, citing lower demand in China and elsewhere. Aluminum prices were down 7.76% for the year and are off 22% from May 2018, cutting into profitability.

The company is not sitting idly by. In September, it announced a comprehensive reorganization plan designed to create a "leaner, more integrated, operator-centric organization," eliminating its business unit structure and consolidating sales, procurement, and other commercial capabilities.

In October, Alcoa said that over a period of 12 to 18 months, it plans to pursue sales of between $500 million and $1 billion worth of noncore assets, placing 1.5 million metric tons of smelting capacity and 4 million tons of alumina refining capacity under review.

The "new" Alcoa post-restructuring could look very different from the current company. As my Motley Fool colleague Reuben Gregg Brewer pointed out in November, Alcoa's portfolio review is heavy on aluminum production, where the company is at a disadvantage relative to emerging market providers, and light on selling bauxite production. Alcoa is the world's second largest bauxite miner, with assets that are mature and low cost, so it appears the company is trying to reposition itself around areas of strength.

That's going to take awhile to play out. In the meantime, Alcoa remains largely tied to the price of aluminum. It could trade up in 2020 if U.S.-China trade tensions ease and Chinese demand rebounds, or down further should the global economy continue to slow or the U.S. stumbles into a recession.

There is a good reason Alcoa is seemingly continuously trying to reinvent itself. Investors should remain on the sidelines and watch how this latest restructuring plays out.