Last year was an excellent one for the market. The S&P 500 delivered a massive 28.9% gain for the year, with its total return after adding in dividends a blistering 31.5%. Even most energy stocks were in rally mode last year as the average one in the S&P 500 produced an 11.7% total return.

That strong performance is what makes Energy Transfer (NYSE:ET) stand out as units of the MLP declined 2.9% in 2019, according to data provided by S&P Global Market Intelligence. Though on a more positive note, the pipeline giant did produce a 5.9% total return after adding in its monster distribution.

Here's a look back at why Energy Transfer delivered such a poor relative performance last year. 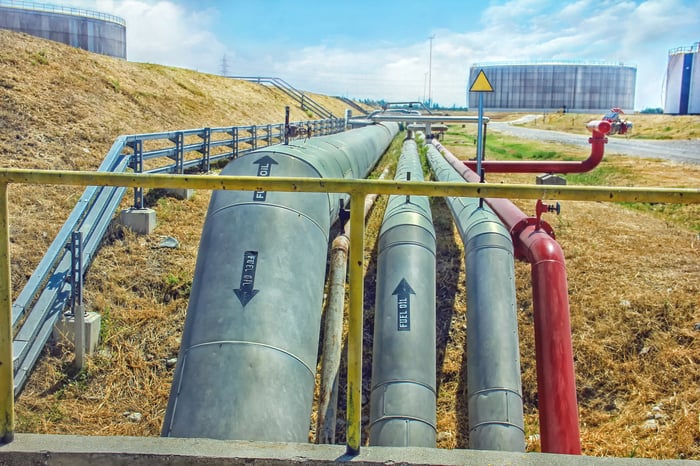 On one hand, 2019 was an excellent year for Energy Transfer. The pipeline company expects to generate between $11 billion and $11.1 billion of adjusted EBITDA for the full year. That's a bit above its initial forecast range of $10.6 billion to $10.8 billion and about 16% higher than 2018's level.

Fueling the company's growth has been the success of its expansion program. One of the biggest drivers was the start-up of the Mariner East 2 pipeline, which helped fuel 34% year-over-year earnings growth in its natural gas liquids (NGL) and refined products segment during the third quarter.

However, the company went up against a couple of headwinds that seemed to weigh on its value last year. First, it continued to experience construction issues. Last year, it encountered another permit delay, this time for its Mariner Express 2X pipeline, which now won't enter service until mid-2020.

On top of that, the MLP market remained under pressure because investors continue abandoning the vehicle due to underperformance and tax complications. That led several MLPs to convert into corporations, with others accepting buyout offers. That lack of investor support weighed on the value of MLPs last year as the average one in the Alerian MLP ETF declined by about 2.6%.

Finally, Energy Transfer made a bold $5 billion bet on the oil infrastructure market by acquiring SemGroup. While the deal immediately bolsters the company's earnings and cash flow on a per-unit basis, as well as enhances its growth prospects, investors saw it as more empire building by Energy Transfer's management team.

Energy Transfer's decline last year made no sense. With its earnings rising while its unit price lost ground again last year, it now trades at an insanely cheap level of less than eight times earnings. Because of that, Energy Transfer looks like an excellent bounce-back candidate for 2020, and one of the best yield-focused stocks to buy this year.