Shares in General Electric (NYSE:GE) rose 47.4% in 2019, according to data provided by S&P Global Market Intelligence. It was a remarkable performance considering some of the operational difficulties the company faced though the year. I'll outline the negatives first.

With all these negatives, it's understandable that investors might question just what caused the former blue chip stock's price rise in 2020. 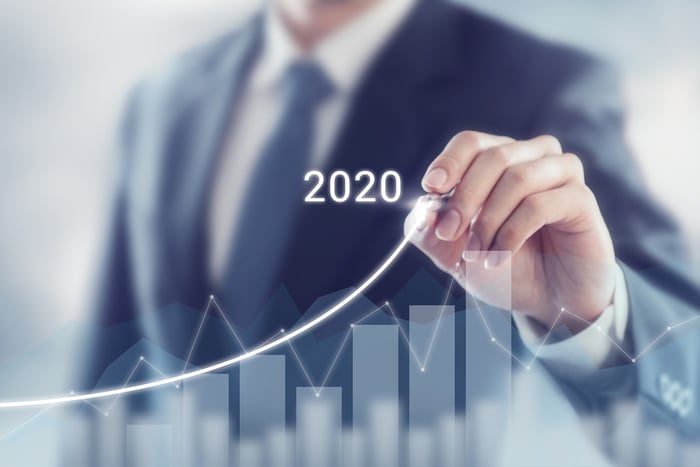 Will GE stock have another great year in 2020? Image source: Getty Images.

The answer probably comes down to three key things. First, GE has had some help from end markets. The aerospace aftermarket remained strong in 2019, and there are signs of stability in the gas turbine market -- recall that GE Power has been the company's problem child for the last few years.

Second, CEO Larry Culp has done a good job of convincing the market that the company is taking serious action to sell off assets and reduce debt. The biopharma deal may not have gone through for the best price for GE shareholders, but it will give GE around $20 billion in cash. Meanwhile, as of the third quarter, GE still had around $9 billion in stock in Baker Hughes and Wabtec that could be sold off. The combined $29 billion will go a long way to reducing GE's industrial net debt of $49 billion.

In addition, GE moved to freeze employee pension benefits -- a move seen as having the potential to reduce its pension funding deficit by up to $8 billion.

Third, Culp has restored a lot of confidence in GE's management through seemingly ending GE's run of overpromising and underdelivering. Former CEOs Jeff Immelt and John Flannery both departed the company sticking to earnings targets that proved unrealistic. In contrast, Culp appears to have lowballed guidance in order to give the company easy hurdles to jump and, in doing so, restore confidence among investors. It's worked.

GE stock now trades close to $12 -- a price that some argue is close to a fair value -- and after the hard work of restoring credibility in the company's guidance and debt reduction plans, it's time for GE to demonstrate some hard operational improvements.

The potential is there, particularly as the company could receive some help from end markets. For example, GE Power's end markets appear to be improving, and despite the 737 MAX woes, the commercial aviation market remains in growth mode.

All told, last year was a great year for GE shareholders, but the stock will need to see more operational progress in 2020 in order to appreciate significantly this year.