Even the best investors, Warren Buffett included, occasionally pick a dog. But the cool thing about investing is that while you can only lose 100% of an investment, there's opportunity to earn far beyond 100% and more than offset your losers by picking multibagger stocks.

To show that these multibagger stocks can come from anywhere, the three companies I'm looking at today are a motley bunch.

Planet Fitness (NYSE:PLNT) operates and franchises its namesake gyms, while also supplying the exercise equipment. Splunk (NASDAQ:SPLK) is riding the big data trend, helping enterprises analyze their data. And Trex (NYSE:TREX) produces composite-decking materials for customers looking to upgrade their outdoor spaces. All three of these stocks have more than doubled over the past three years.

Fortunately for investors, all three still have plenty of room to grow and are worth buying today. 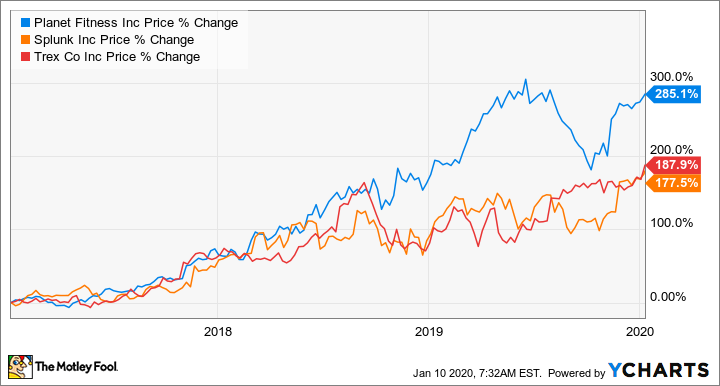 The pipeline is full for Planet Fitness

Since then, the company has grown tremendously and now has 1,899 locations, 14.1 million members, $625 million in TTM revenue, and has extended its comparable-sales growth streak to 51 straight quarters. It's no wonder the stock has nearly tripled over this time span.

Even approaching 2,000 locations, Planet Fitness still has plenty of growth opportunities. The company currently has around 1,000 locations in the pipeline to be opened over the next three to five years. At that point, the U.S. market may start getting pretty full. But it still has barely tapped into markets abroad, and a recent Australian franchise deal demonstrates that it's ready to seize international markets as well. 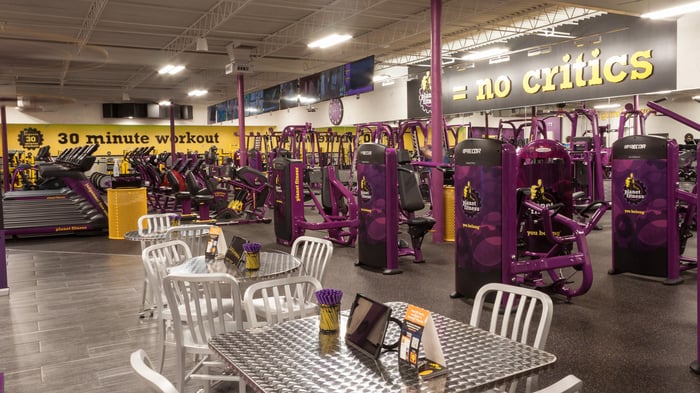 As data is created at an incredible pace, more businesses need Splunk to help make sense of it all. At the start of 2017, Splunk had over 13,000 customers and $950 million in TTM revenue. Over the last three years, its customer base has grown almost 50% to over 19,000 customers. And TTM revenue has more than doubled to $2.2 billion.

The company has also shifted more toward a software-as-a-service model with cloud-based products, which makes tracking annual recurring revenue (ARR) important. In the third quarter of 2019, Splunk reported ARR of $1.4 billion, up 53% year over year.

Splunk's total addressable market (TAM) just keeps growing. Its most recent estimate placed the TAM at $62 billion -- up nearly 100% from when the company priced its IPO in 2012.

This growing market is a compelling reason to like the stock going forward. It's investing in industry trends such as enterprise cloud migration, like when it acquired SignalFX for $1 billion in August 2019. SignalFX is a cloud monitoring company, and it extends Splunk's lead in the space as the trend toward the cloud continues. Trading at over 24 times expected 2023 cash flow, or 11 times sales, the stock is far from cheap, but Splunk has the quality growth to support such a valuation.

That's impressive enough, but this company truly shines when you look at its bottom line growth. Net income has nearly doubled over the same time span to $134 million. The stock currently trades at 33 times forward earnings, which may seem like a rich valuation, but as the chart below shows, it's just a little higher than the five-year average. 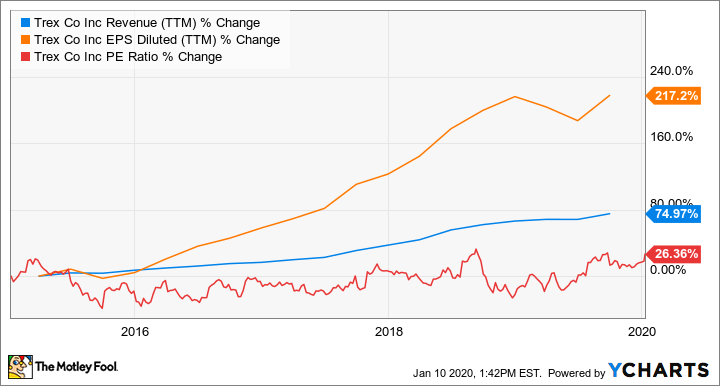 Trex has a terribly efficient management team that consistently grows the bottom line faster than the top. Charts over various time frames bear this out, including the five-year chart displayed above.

And there's reason to expect that trend to continue over the next few years. In the third quarter earnings call, management stated that new production lines were coming online in 2020 and that production capability will be 70% higher in 2021 than it is today.

One driver for Trex's increased demand will be commercial products. Over the past nine months, only 7% of sales came from commercial, the rest from residential. And commercial demand has been weaker than expected in 2019.

But management believes commercial customers have merely been delaying purchases, which means that it's only a matter of time for this segment to provide a revenue boost. Now, the company currently has some start-up costs with the commercial lines, but those current costs are future opportunities to continue driving earnings growth.

Just one for today?

To be clear, I've included these three stocks, because I believe they're all worth buying, but if you have to pick one, my favorite is Splunk.

The big-data tide is rising so fast that I can't imagine Splunk's ship not rising with it. Consider that according to a report by IDC, 175 zettabytes of data are expected to be created in the year 2025 alone. If you aren't sure how big 175 zettabytes is, it's 175 billion terabytes.

For comparison, estimates place 2018 data creation at 33 zettabytes. And over half of the data in the 2025 forecast is expected to be machine-generated data, which is Splunk's bread and butter.

Past success, coupled with an exploding opportunity, is a compelling reason to make this one of your top stocks today.